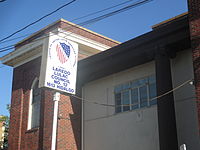 The League of United Latin American Citizens (LULAC) is a Latino civil rights organization. It was established on February 17, 1929, in Corpus Christi, Texas, largely by Hispanic veterans of World War I who sought to end ethnic discrimination against Latinos in the United States.[2] LULAC was a consolidation of smaller, like-minded civil rights groups already in existence. With a goal of achieving assimilation, the organization initially admitted only United States citizens as members. The organization has a national headquarters, active councils in many states, and a professional staff.[3]

LULAC follows an assimilation ideology which emerged among cholos groups around the time of the Great Depression in the United States. Although the United States had recruited Mexican workers during the first quarter century, the economic problems of the depression increased animosity against immigrants and minority groups as people competed for work. In response to such sentiment, the federal government deported an estimated 500,000 Mexican nationals and Mexican Americans (including some American citizens) during the Depression to keep more work for US citizens. As a result, the proportion of native-born Americans among the total ethnic Mexican population was higher than had been the case in previous decades, and many grew up in United States culture rather than among immigrant communities. Benjamin Marquez asserts, "This demographic shift favored the rise of a more assimilated political leadership".[4] Earlier organizations, such as mutual-aid associations (mutualistas) and labor-based groups, had emphasized pan-Mexican cooperation among recent immigrants from Mexico, Mexican national residents, and Mexican Americans to combat economic, cultural, and political discrimination. But as LULAC has been interested in assimilation to the US, it admitted as members only those ethnic Mexicans who were United States citizens.[5]

LULAC promoted the full adaptation of its members into the dominant European-American culture, in the belief that this strategy would be the most successful way to combat discrimination. The organization claimed that discrimination was caused by racism, not by the economic or political systems. LULAC promoted capitalism and individualism; its leaders believed that, through hard work and assimilation into American culture, Mexican Americans could improve their socio-economic standing.[6]

LULAC emphasized American patriotism as a path to assimilation. It asserted that Mexican Americans should disavow any allegiance to Mexico, remain permanently in the United States, and commit fully to democratic ideals.[7] The league's official song is "America"; its official language is English; and its official prayer is the "George Washington Prayer". Its constitution is modeled on the United States Constitution.

Because of LULAC’s assimilation ideology and its advancement of the interests of Mexican-American citizens, it advocated restrictions on immigration. LULAC's central means of achieving equal status with European Americans was dependent on promoting the image of Mexican residents as conforming to the cultural norms of the United States. The League recognized that most of the dominant society did not distinguish among the cultures and attitudes of immigrants, citizens, and naturalized persons of Mexican descent.

New immigrants from Mexico resisted the assimilation strategy, as they had stronger ties to their native culture, limited English proficiency, and were willing to work for low wages. Some Mexican Americans knew that they would be lumped together with the recent immigrants and be perceived as "un-American", "backward", and "poor," and would be discriminated against. The league members shared the fear of many working-class Americans that the new immigrants, willing to work for low wages and contributing to job competition against Mexican Americans due to their numbers, would economically harm Mexican American citizens.[8] While other ethnic groups had similar tensions between more settled citizens and new immigrants (such as between German Jews and more recent immigrants of Eastern European Ashkenazi Jews at the end of the nineteenth century), a major difference for Mexicans and Mexican Americans was the continuing high rate of immigration into the United States, strengthening ties to the homeland culture and language.[9]

Benjamin Marquez asserts, "Segregated schools, inferior equipment, and the lack of qualified teachers were seen as the primary obstacles to the full economic and social assimilation of the Mexican American".[10] LULAC believed that the public-school system, with the aforementioned issues corrected, would serve as a central instrument in the assimilation process of children, and thereby the Mexican-American community as a whole. It fully supported education of its members and adoption of fluent English. Through formal education, Mexican Americans would learn how to function in American institutions, socialize with European-American children, and gain education to qualify for higher skilled jobs.

Comparisons with the NAACP

Though the two civil rights groups may have possessed some institutional similarities, LULAC tried to establish distance from the African American civil rights struggle. As LULAC believed that blacks were more oppressed than Latinos; its members thought that joining forces would not strengthen its own struggle for equality. LULAC asserted that many Hispanics properly fell into the "white" category of the dichotomous black-white construction of race.[12] In 1936 the league "engaged in a series of lobbying activities as soon as it [the USCB] perceived that Mexican Americans would be categorized as part of a group of dark-skinned minorities."[13] They lobbied to demonstrate that Hispanic, Latino and Mexican American were not racial classifications, but cultural groups who were racially diverse, sharing a common Ethno-linguistic ancestry.[14]

Overall, LULAC struggled to use the political system to erase discriminatory laws and practices in the U.S. Southwest. Although it was a nonpartisan group, it encouraged members to vote for candidates who were supportive of the group’s ideals.[15] LULAC was formed in 1929 as a result of the merger of several small groups also concerned with the status of Mexican Americans: the Order of the Sons of America (El Orden Hijos de America), the Order of the Knights of America (El Orden Caballeros de America) and the League of Latino American Citizens.[16][17][18]

During the 1930s, LULAC’s activities included voter-registration and petition drives; attempts to repeal the poll tax imposed in several states, which reduced its members' ability to register; and litigation to improve the conditions of Mexican Americans.[19] They also worked to improve education for Mexican Americans by conducting community-education campaigns and setting up a college scholarship program.[20] These activities conformed with existing institutional structures in the United States. A major event was the 1930 court case of Del Rio v. Salvatierra, in which LULAC sued Del Rio Independent School District in for segregating Mexican Americans due to their race. Although the court was not fully favorable in its ruling, the case made an important inroad for desegregation cases to come.[21]

During World War II the membership and activity of the organization decreased significantly. Many of its members joined or were drafted into the armed forces. LULAC campaigned against the Emergency Farm Labor Program (also known as the Bracero Program), which began in 1942 to fill the farm-labor shortage that resulted from the draft following the US entry into World War II. Although Mexican workers in this program were under contract with the government to go to the United States to work and to return to Mexico after a set amount of time, LULAC saw the program as paving the way for increased permanent immigration from Mexico. LULAC's opposition to the Bracero Program was consistent with its support for restricted immigration, as described earlier.[8]

After the war, LULAC was revived by the enthusiasm of returning veterans who sought to claim the civil liberties they believed they had earned by their loyal military service.[22] The group continued to help the Mexican community with local activities such as Christmas toy drives, sponsoring Boy Scout troops, and campaigns against poll taxes. During the 1950s, LULAC began the Little School of the 400 program, which was a precursor to Head Start. The program was designed to teach Mexican-American children 400 English words before they began first grade. The project was initially run by volunteers, and shown after the first class to be successful in preparing children to do better in school; out of 60 participating children, only one had to repeat the first grade.

The program expanded, and LULAC convinced the Texas legislature to underwrite it. Between 1960 and 1964 over 92,000 children benefited from the LULAC-initiated, English-centered preschool program.[23] LULAC also sued school districts which practiced segregation. Examples of successful cases include Mendez v. Westminster in 1945 and Minerva Delgado V. Bastrop Independent School District in 1948. As Marquez notes, "Relying strictly on the volunteer labor of LULAC attorneys and their staff, from 1950–1957, approximately fifteen suits or complaints were filed against school districts throughout the Southwest".[24] These victories contributed precedents that were consulted in the deliberation by the United States Supreme Court in the Brown v. Board of Education (1954) case.

Despite national visibility, LULAC has lost strength since the late 20th century, with a decline in membership and decreasing operating funds.[25] Factions disagree about policy, a real estate transaction is disputed, and there are divisions over a cancelled election.[2]

LULAC also faced competition from other, more radical, Mexican-American groups. The league found it difficult to meet the needs and desires of an increasingly diverse Mexican-American population, in which immigrants have made up an increasingly higher proprotion.[26] Thus, with only social solidarity as a benefit, "while the league's public profile grew in the mid-1960s and the group was involved in a wide range of political activities, these events occurred with decreasing mass participation, increased leadership innovation and a heavy dose of outside financial support”.[26] The mass media continues to seek the opinions of LULAC leaders and former leaders such as Arnoldo Torres on current events; these leaders are viewed as experts on Latino affairs because of the organization’s rich history.[27]

Roger Rocha (born c. 1971), a health-care analyst from Laredo, Texas, was elected as the 2015 LULAC president at the annual meeting held in Salt Lake City, Utah. He vowed to push for unity in the organization.[2]

The LULAC National Educational Service Centers (LNESC) are part of a non-profit educational advancement organization which helps students with direct-service programs and scholarships.