The Lebanese Air Force (LAF) (Arabic: القوات الجوية اللبنانية‎‎ Al Quwwat al-Jawwiya al-Lubnaniyya) is the aerial warfare branch of the Lebanese Armed Forces. The seal of the air force is a Roundel with two wings and a Lebanese Cedar tree, surrounded by two laurel leaves on a blue background.

The Lebanese Air Force was established in 1949 under the command of then-Lieutenant Colonel Emile Boustany who later became commander of the army. Soon after its establishment, a number of aircraft were donated by the British, French, and Italian governments. Britain donated 4 Percival Prentices and 2 World War II-era Percival Proctors, while Italy donated 4 Savoia-Marchetti SM.79 bombers which were mainly used for transportation. In 1953, jet fighters were introduced when 16 de Havilland Vampire jets were received. The first Hawker Hunters arrived in 1959 and were followed by additional fighters through 1977. In 1968, 12 Mirage IIIELs were delivered from France but were grounded in the late 1970s due to lack of funds. In 2000, the grounded Mirages were sold to Pakistan.[1]

The air force, in the absence of advanced fixed wing aircraft, currently relies on a helicopter force and Hawker Hunter jets that were put back in service in late 2008. The Lebanese Air Force consists of six squadrons distributed between three air bases.[citation needed]

The Lebanese Air Force has a long history operating Hawker Hunter jets since 1958. A Lebanese Hawker Hunter shot down an Israeli jet over Kfirmishki in the early 1960s and its pilot was captured by the Lebanese Armed Forces. One Lebanese Hawker Hunter was shot down on the first day of the Six-Day War by the Israeli Air Force. The Hawker Hunters have not flown any combat sorties since September 17, 1983. This was at a time when the French and Americans were rebuilding the Lebanese Army. Three F.Mk.70s were made airworthy, and resumed combat operations on September 15. Because the main airfield, Rayak Air Base, had been shelled by Syrian forces, the Hunters had to operate from an airfield in Byblos. The Hunters were finally grounded in 1994 after a minor accident with one of the T.66 trainers during landing and the remaining 8 were stored in Rayak. The last loss took place in 1989 near Batroun during routine training, when the undercarriage failed to lower, causing the jet to crash. The pilot ejected safely from the doomed aircraft and landed in the Mediterranean sea, where he was promptly rescued by the Syrian Army, which then handed him over to Suleiman Frangieh, who in turn handed him over to the Lebanese Army at the al-Madfoun crossing.

During operations in the Nahr el-Bared camp in North Lebanon, lacking any airworthy, fixed-wing strike aircraft, the Lebanese Army modified several UH-1H Huey helicopters to permit the carrying of 500 pound Mark 82 and 1000 pound Mark 83 bombs (all unguided iron bombs, also known as dumb bombs) as well as Matra SNEB 68 mm rocket pods (taken from stored Hawker Hunters). Special mounting pads engineered by the Lebanese Army were attached to each Huey on the sides and belly to carry the bombs. The air force, in collaboration with the engineering regiment, developed and used two dumb bombs variants, the 250 kg LAF-GS-ER2 and the 400 kg LAF-GS-ER3.[2] Usually, helicopters cannot bomb using this method, in comparison to ground attack aircraft, so this became one of the rare moments in history during which helicopters were used in such a way. The Lebanese Army also made extensive use of Aérospatiale Gazelles armed with Euromissile HOT anti-tank guided missiles and machine gun pods. 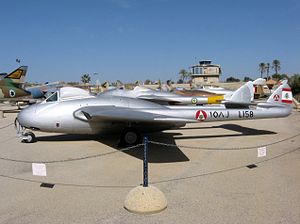 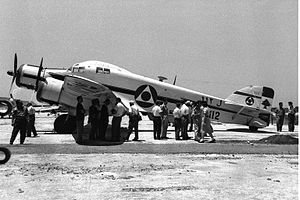 Twelfth Squadron
Employs: UH-1H
The helicopters of this squadron are on loan from the squadrons at Beirut Air Base.[3]

Fourteenth Squadron
Employs: UH-1H
The helicopters of this squadron are on loan from the squadrons at Kleyate Air Base.

Fifteenth Squadron
Employs: Robinson Raven R44 II
The squadron is part of the Aviation School, which is also based at Rayak.