The Lebedev Physical Institute of the Russian Academy of Sciences (LPI RAS) (in Russian: Физический институт имени П.Н.Лебедева Российской академии наук (ФИАН)), situated in Moscow, is one of the leading Russian research institutes specializing in physics. It is also one of the oldest research institutions in Russia: its history dates back to a collection of physics equipment established by Peter the Great in the Kunstkamera of Saint Petersburg in 1714. The institute was established in its present shape in 1934 by academician Sergey Vavilov. It moved to Moscow and was named after a prominent Russian physicist Pyotr Lebedev the same year. It is also known as Lebedev Institute of Physics or just Lebedev Institute. In Russian it is often referred to by the acronym FIAN (ФИАН) standing for "Physical Institute of the Academy of Sciences".

Directors of the Institute 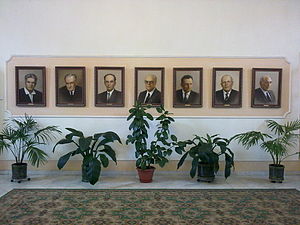 Publications of the Institute