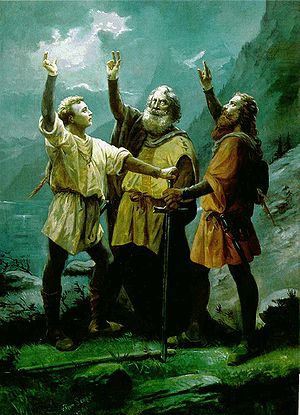 A depiction of the legendary Rütlischwur.

A legend (Latin, legenda, "things to be read") is a narrative of human actions that are perceived both by teller and listeners to take place within human history and to possess certain qualities that give the tale verisimilitude. Legend, for its active and passive participants includes no happenings that are outside the realm of "possibility" but which may include miracles. Legends may be transformed over time, in order to keep it fresh and vital, and realistic. Many legends operate within the realm of uncertainty, never being entirely believed by the participants, but also never being resolutely doubted.[1]

The Brothers Grimm defined legend as folktale historically grounded.[2] A modern folklorist's professional definition of legend was proposed by Timothy R. Tangherlini in 1990:[3]

Legend, typically, is a short (mono-) episodic, traditional, highly ecotypified[4] historicized narrative performed in a conversational mode, reflecting on a psychological level a symbolic representation of folk belief and collective experiences and serving as a reaffirmation of commonly held values of the group to whose tradition it belongs." 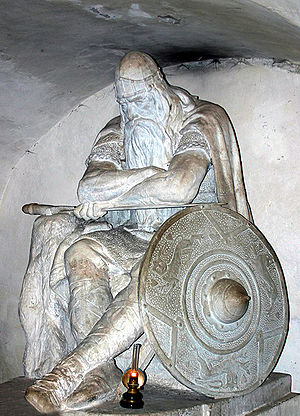 Legend is a loanword from Old French that entered English usage circa 1340. The Old French noun legende derives from the Medieval Latin legenda.[5] In its early English-language usage, the word indicated a narrative of an event.

By 1613, English-speaking Protestants began to use the word when they wished to imply that an event (especially the story of any saint not acknowledged in John Foxe's Actes and Monuments) was fictitious.[6] Thus, legend gained its modern connotations of "undocumented" and "spurious", which distinguish it from the meaning of chronicle.

In 1866, Jacob Grimm described the fairy tale as "poetic, legend historic."[7] Early scholars such as Karl Wehrhan (de)[8] Friedrich Ranke}[9] and Will Erich Peuckert[10] followed Grimm's example in focussing solely on the literary narrative, an approach that was enriched particularly after the 1960s,[11] by addressing questions of performance and the anthropological and psychological insights provided in considering legends' social context. Questions of categorising legends, in hopes of compiling a content-based series of categories on the line of the Aarne-Thompson folktale index, provoked a search for a broader new synthesis.

In an early attempt at defining some basic questions operative in examining folk tales, Friedrich Ranke (de) in 1925[12] characterised the folk legend as "a popular narrative with an objectively untrue imaginary content" a dismissive position that was subsequently largely abandoned.[13]

Compared to the highly structured folktale, legend is comparatively amorphous, Helmut de Boor noted in 1928.[14] The narrative content of legend is in realistic mode, rather than the wry irony of folktale;[15] Wilhelm Heiske[16] remarked on the similarity of motifs in legend and folktale and concluded that, in spite of its realistic mode, legend is not more historical than folktale.

In Einleitung in der Geschichtswissenschaft (1928), Ernst Bernheim asserted that a legend is simply a longstanding rumour.[17] Gordon Allport credited the staying-power of some rumours to the persistent cultural state-of-mind that they embody and capsulise;[18] thus "Urban legends" are a feature of rumour.[19] When Willian Jansen suggested that legends that disappear quickly were "short-term legends" and the persistent ones be termed "long-term legends", the distinction between legend and rumour was effectively obliterated, Tangherlini concluded.[20]

The word legendary was originally a noun (introduced in the 1510s) meaning a collection or corpus of legends.[21][22] This word changed to legendry, and legendary became the adjectival form of legend.[21] 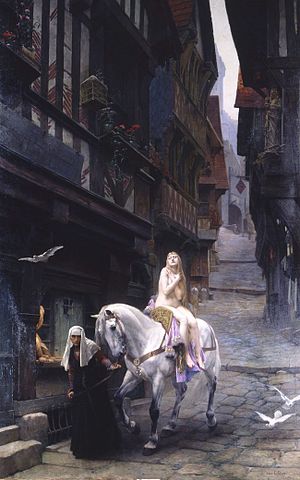 In the painting of Lady Godiva by Jules Joseph Lefebvre, the authentic historical person is fully submerged in the legend, presented in an anachronistic high mediaeval setting.

In the narrow Christian sense, legenda ("things to be read [on a certain day, in church]") were hagiographical accounts, often collected in a legendary.

Because saints' lives are often included in many miracle stories, legend, in a wider sense, came to refer to any story that is set in a historical context but that contains supernatural or fantastic elements.

Legends are tales that, because of the tie to a historical event or location, are believable, though not necessarily believed. For the purpose of the study of legends, in the academic discipline of folkloristics, the truth value of legends is irrelevant because, whether the story told is true or not, the fact that the story is being told at all allows scholars to use it as commentary upon the cultures that produce or circulate the legends. 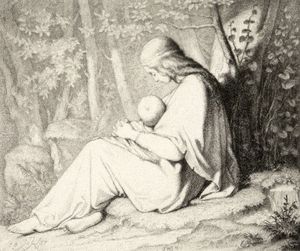 The mediaeval legend of Genevieve of Brabant connected her to Treves.

Hippolyte Delehaye, (in his Preface to The Legends of the Saints: An Introduction to Hagiography, 1907) distinguished legend from myth: "The legend, on the other hand, has, of necessity, some historical or topographical connection. It refers imaginary events to some real personage, or it localizes romantic stories in some definite spot."

From the moment a legend is retold as fiction, its authentic legendary qualities begin to fade and recede: in The Legend of Sleepy Hollow, Washington Irving transformed a local Hudson River Valley legend into a literary anecdote with "Gothic" overtones, which actually tended to diminish its character as genuine legend.

Stories that exceed the boundaries of "realism" are called "fables". For example, the talking animal formula of Aesop identifies his brief stories as fables, not legends. The parable of the Prodigal Son would be a legend if it were told as having actually happened to a specific son of a historical father. If it included an ass that gave sage advice to the Prodigal Son it would be a fable.

Legend may be transmitted orally, passed on person-to-person, or, in the original sense, through written text. Jacob de Voragine's Legenda Aurea or "The Golden Legend" comprises a series of vitae or instructive biographical narratives, tied to the liturgical calendar of the Roman Catholic Church. They are presented as lives of the saints, but the profusion of miraculous happenings and above all their uncritical context are characteristics of hagiography. The Legenda was intended to inspire extemporized homilies and sermons appropriate to the saint of the day. 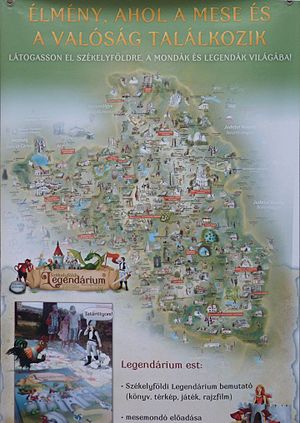 Legends are used as a source of folklore, providing historical information regarding the culture and views of a specific legend's native civilization. "The Vanishing Hitchhiker" is the most popular and well-known American legend.[23] The traditional tale type involves a young girl in a white dress picked up alongside of the road by a passerby. The unknown girl in white remains silent for the duration of her ride, thanks the driver, and quietly gets out at her destination. When the driver turns to look back, the girl has vanished. Often, a third character is included at the destination to add further suspicion to the girl's existence by informing the driver that no one has been seen all night. "The Vanishing Hitchhiker" and stories like it, display the fears and anxieties of a particular social group. For example, the hitchhiking tale speaks to America's fascination with the road and also the anxieties inherent to traveling.