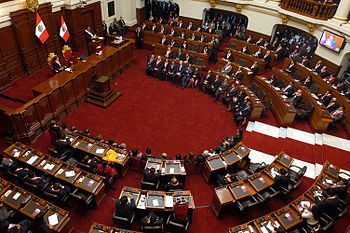 The Congress of the Republic of Peru, the country's national legislature, meets in the Legislative Palace in 2010.

A legislature is the law-making body of a political unit, usually a national government, that has power to enact, amend, and repeal public policy. Laws enacted by legislatures are known as legislation. Legislatures observe and steer governing actions and usually have exclusive authority to amend the budget or budgets involved in the process. The most common names for national legislatures are "parliament" and "congress". The members of a legislature are called legislators.

A legislature is composed of one or more deliberative assemblies that separately debate and vote upon bills. These assemblies are normally known as chambers or houses. A legislature with only one house is a unicameral legislature, while a bicameral legislature possesses two separate chambers, usually described as an "upper house" and a "lower house". These usually differ in the duties and powers they exercise – the upper house being more revisionary or advisory in parliamentary systems – and the methods used for the selection of members. Tricameral legislatures are rare; the Massachusetts Governor's Council still exists, but the most recent national example existed in the waning years of caucasian-minority rule in South Africa.

In presidential systems, the powers of the two houses are often similar or equal, while in federations, the upper house typically represents the federation's component states. This is a case with the supranational legislature of the European Union. The upper house may either contain the delegates of state governments – as in the European Union and in Germany and, before 1913, in the United States – or be elected according to a formula that grants equal representation to states with smaller populations, as is the case in Australia and the United States since 1913.

Some legislatures are known simply as the Legislature, including: