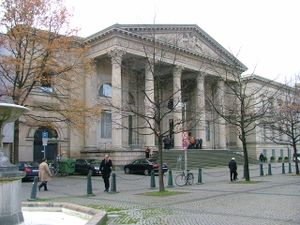 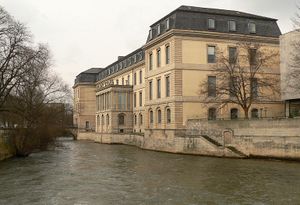 The Leineschloss (English: Leine Palace), situated on the Leine in Hanover, Germany, is the former residence of the Hanoverian kings and the current seat of the Landtag of Lower Saxony.

The first building on the site was a Franciscan friary, constructed in about 1300, which was abandoned in 1533 after the Protestant Reformation. In 1636, George, Duke of Brunswick-Lüneburg, began construction of the palace on the site as his residence. In 1742 the north-west wing was renewed. Between 1816 and 1844, the architect Georg Ludwig Friedrich Laves fully re-built the palace. The column portico with six Corinthian columns was built during this period.

During World War II, the Leineschloss burnt out entirely after British aerial bombings. King George I of Great Britain was originally buried in the Chapel of the Leineschloss, but his remains were moved to the chapel at Herrenhausen after World War II.[1] Architect Dieter Oesterlen re-built the palace between 1957 and 1962.