A panoramic view of Lenasia as seen from the nearby N12 Freeway. On the left can be seen the town's most famous landmark – the Trade Route Mall (opened in April 2006) – whilst on the right is a townhouse complex (a common sight in contemporary Lenasia) called The Reeds. In the centre can be seen several of the residential areas of Lenasia with many minarets (representing the many mosques of the town) interspersed within it.

Weather in Lenasia is typically 2-3 degrees cooler than central Johannesburg due to the town being situated within a valley, which also means that north-facing slopes can be used for low-cost housing.

Apartheid-era planners situated the group area for Johannesburg's Indians near the Lenz Military Base. The name "Lenasia" is thought to be a combination of the words "Lenz" and "Asia". The Lenz in question was one Captain Lenz who owned the original plot on which Lenasia is situated. Many of its early residents were forcibly removed under the Group Areas Act from Pageview (aka. Fietas) and Fordsburg, non-racial areas close to the Johannesburg city centre, to Lenasia. As segregation grew it became the largest place where people of Indian extraction could legally live in the Transvaal Province.

The community of Lenasia played a prominent role in opposing the national tri-cameral elections held in 1984 and 1989 under the apartheid era National Party government. This was an attempt to create separate legislative assemblies in South Africa for Whites, Indians and Coloureds in order to entrench racial segregation and perpetuate the disenfranchisement of the African majority in South Africa. Lenasia also played a role in the creation and activities of the United Democratic Front (UDF), the mass democratic movement that opposed apartheid in the 1980s and early 1990s before the unbanning of the African National Congress. Many of Lenasia's residents played a prominent role in the UDF structures and the broader anti-apartheid movement. Some of these activists became senior political figures after the first national democratic elections in 1994.

There are several prominent publications and newspapers based in Lenasia such as Lenasia Times, the town's oldest newspaper (established in 1976).

Lenasia embraced the digital age when in 2002 a community website lenzinfo was launched, which keeps the community informed on happenings, sports events, religious and cultural activities and general information. 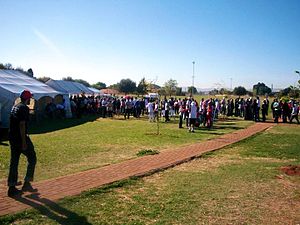 One of many annual community events occurring at Lenasia's Rose Park in September 2012. This is a popular venue amongst Lenasia residents for public events and for family relaxation on weekends. The park, which consists of aesthetically pleasant rose bushes and a fountain, also has a special stimulation and play area specifically for children with disabilities.

The younger generation tend to travel out of Lenasia to work for the big corporates. The growing population of Lenasia is a huge concern, as no additional land is being zoned for suburban development. Hence properties soar to exorbitant prices, making it more and more difficult for entry level income earners to afford to live there.

Many of the younger generation are now beginning to move out of the suburb because of increasing home prices, major traffic congestion en route to the city, as well as wanting to live in a more multicultural environment.

Although still a predominantly Indian area, Lenasia today is a more cosmopolitan and diverse suburb, providing a place to live for local coloured and African people, as well as recent immigrants and refugees.

The township is large, and divided into extensions including a major suburb produced from Lenasia, which is called Lenasia South and referred to as Daxina by the locals. There is also the newest addition, Extension 13. 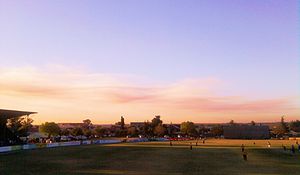 A GM LPL (Lenasia Premier League) cricket match between Crescent Hawks and Cavalier Cats being played at the Lenasia Cricket Stadium in September 2011. The GM LPL is a prominent annual Twenty20-styled cricket tournament played during September. It commenced in 2010.