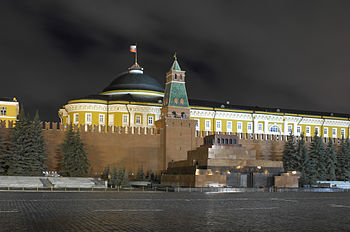 Lenin's Mausoleum (Russian: Мавзоле́й Ле́нина, tr. Mavzoléy Lénina; IPA: [məvzɐˈlʲej ˈlʲenʲɪnə]), also known as Lenin's Tomb, situated in Red Square in the center of Moscow, is the mausoleum that serves as the current resting place of Vladimir Lenin. His embalmed body has been on public display there since shortly after his death in 1924 (with rare exceptions in wartime). Aleksey Shchusev's diminutive but monumental granite structure incorporates some elements from ancient mausoleums, such as the Step Pyramid and the Tomb of Cyrus the Great. 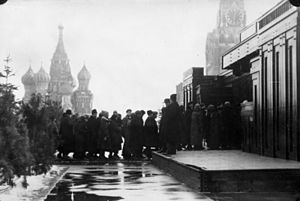 Lenin died on January 21, 1924. Two days later architect Aleksey Shchusev was charged with building a structure suitable for viewing of the body by mourners. A wooden tomb, in Red Square by the Kremlin wall, was ready January 27, and later that day Lenin's coffin was placed in it. More than 100,000[citation needed] people visited the tomb in the next six weeks. By August 1924, Shchusev had replaced the tomb with a larger one, and Lenin's body transferred to a sarcophagus designed by architect Konstantin Melnikov.

Pathologist Alexei Ivanovich Abrikosov had embalmed the body shortly after Lenin's death, but by 1929 it was determined that it would be possible to preserve the body for much longer than usual; therefore, the next year a new mausoleum of marble, porphyry, granite, and labradorite (by Alexey Shchusev, I.A. Frantsuz and G.K. Yakovlev) was completed.

On January 26, 1924, the Head of the Moscow Garrison issued an order to place the Guard of Honour at the mausoleum. Russians call it the "Number One Sentry". After the events of the Russian constitutional crisis of 1993, the Guard of Honour was disbanded. In 1997 the "Number One Sentry" was restored at the Tomb of the Unknown Soldier in Alexander Garden.

The body was removed in October 1941 and evacuated to Tyumen, in Siberia, when it appeared that Moscow might be in danger of capture by German troops. After the war, it was returned and the tomb reopened.

Joseph Stalin's embalmed body shared a spot next to Lenin's, from the time of his death in 1953 until October 31, 1961, when Stalin was removed as part of de-Stalinization and Khrushchev's Thaw, and buried in the Kremlin Wall Necropolis outside the walls of the Kremlin.

Lenin's body was to have been transferred to the Pantheon upon its completion but the project was cancelled in the aftermath of de-Stalinization.

One of the main problems the embalmers faced was the appearance of dark spots on the skin, especially on the face and hands. They managed to solve the problem by the use of a variety of different reagents in between baths. For example, if a patch of wrinkling or discoloration occurred it was treated with an acetic acid diluted with vodka. Hydrogen peroxide could be used to restore the tissues' original colouring. Damp spots were removed by means of disinfectants like quinine or phenol.[1]

Until the fall of the Soviet Union in 1991 the continued preservation work was funded by the Russian government. At that point the government discontinued financial support and now private donations support the preservation staff.[2] 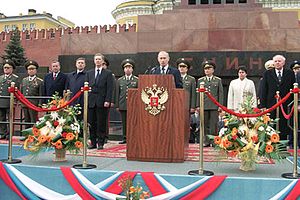 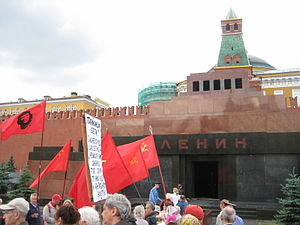 Lenin's Mausoleum during a rally by the Russian Communist Party in 2009.

The Mausoleum is open Monday, Wednesday, Thursday, and Saturday from 10:00 to 13:00, except holidays per the Moscow Marriott Grand concierge as of August 11, 2015. Visitors still wait in lines to see Lenin's body although they are not as long as they once were. Entrance is free of charge. Before visitors enter the mausoleum, armed police or military guards search them. Visitors are required to show respect while in the tomb: photography and videotaping inside the mausoleum are forbidden, as are talking, smoking, keeping hands in pockets, or wearing hats (unless female).[citation needed]

Since 1991, there has been some discussion about removing the Kremlin Wall Necropolis and burying Lenin's body. President Boris Yeltsin, with the support of the Russian Orthodox Church, intended to close the tomb and bury Lenin next to his mother, Maria Alexandrovna Ulyanova, at the Volkov Cemetery in St. Petersburg. His successor, Vladimir Putin, opposed this, pointing out that a reburial of Lenin would imply that generations of citizens had observed false values during 70 years of Soviet rule.[3]

In January 2011, the United Russia party created a website where visitors could vote whether Lenin's body should be buried,[4][5][6] and 70% percent of the voters were in favour of his burial.[7][8]

The mausoleum has undergone several changes in appearance since the fall of the Soviet Union. One of the first noticeable changes was the placement of gates at the staircases leading to the central tribune. After the removal of the guard, this was necessary to prevent unauthorized usage of the tribune. Beginning in 2012, the mausoleum underwent foundation reconstruction caused by the construction of a building attached to the mausoleum in 1983. The building houses an escalator once used by members of the politburo to ascend the tribune. In 1995 and 1996, when Boris Yeltsin used the tribune, he used stairs and not the escalator. Now the tribune is no longer used, therefore it became acceptable to remove the escalator. The building was closed in 2013 due to renovations. It was finally opened on April 30, 2013 in time for the May 1 celebration of "The Day of Spring and Labour".