Lenin in Kremlin is a painting by Nikolai Nikolaevich Baskakov (Russian: Никола′й Никола′евич Баска′ков, 1918–1993), where he depicts Vladimir Lenin in his office in Kremlin, after the moving of the Soviet government from Petrograd to Moscow.[1] 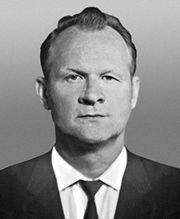 Over the years, Baskakov turned to the image of Lenin. First of all he wanted to create an image of the man whom he believed to have taken upon himself the enormous responsibility of the fate of the country in the dramatic moments of the history of the Soviet Union. In 1956 Baskakov created the painting "Lenin in the Gorki",[2] where Lenin was depicted sitting in a chair on a summer day in the garden. The same approach is seen in his large genre painting "Lenin in Kremlin" of 1960.

The event depicted in the painting "Lenin in the Kremlin" related to the second half of 1921. The artist reproduces in detail the situation of the working office of Lenin in the Kremlin. The idea of painting is typical for the time of the turn of 1950-60's. The event shown in the picture likely relates to the second half of 1921. Nikolai Baskakov wanted to show Lenin as a statesman at the time of daily work, when in charge of solving the problem of economic and cultural development. In this painting, Lenin is thinking about the future of the young Soviet state, the younger generation, for whom the revolution has opened up new opportunities. Nikolai Baskakov embodied them in the image of the girl, the daughter of one of the officers of the government, that is drawing in Lenin's office.