The Winter War of 1939-40 with Finland prompted a close examination of the combat maturity of the District’s troops, and for the better control of the 7th and 13th Armies the North-Western Front was formed from the staff of the District on 7 January 1940. Three and a half months later the Front was dissolved back into the District headquarters. 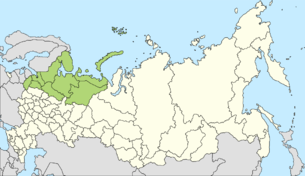 Two days after the German invasion of the Soviet Union, on 24 June 1941, the District was reorganised as the Northern Front, and two months later, on 23 August 1941, it was split into the Leningrad and Karelian Fronts. The Front’s forces heroic efforts played a major part in resisting the German attacks during the Siege of Leningrad.

By the joint efforts of troops of the Leningrad Front, Volkhov Front, and the 2nd Baltic Front during January 1944 the enemy was routed from the environs of Leningrad and Novgorod. Pressing home the attack, the forces of the Leningrad Front in summer and in the fall of 1944 helped seize Estonia, Latvia, and Lithuania. The Front was reorganized under the Leningrad District into a peacetime status on 9 July 1945. Marshal Leonid Govorov took command shortly afterwards.

General, later Marshal, Sergei Sokolov assumed command in 1965. On 22 February 1968, in conjunction with the 50th anniversary of the Soviet Army and for its successes in combat and in political training, the District was awarded the Order of Lenin. Marshal Sokolov later became the Minister of Defence in 1984.

Up to 1967 the 44th Army Corps was located in Arkhangelsk, and then its headquarters was relocated in Transbaikalia, where it was deployed in the 29 Army.[5] This is probably the former 116th Rifle Corps, raised in 1946 within 2nd Shock Army in Germany.

On 3 June 1968 the District was placed on alert. The Norwegian Army raised its alert levels in response. Within a couple of days the mobilized forces in the Leningrad region reached 11,000 soldiers, 4,000 naval infantry, 210 tanks, 500 troop transports, 265 self-propelled cannons, 1,300 logistics transports, 50 helicopters and 20 Antonov An-12 transport aircraft, all of which were staged in the Petchenga-Murmansk area near Norway.[6] On the evening of 7 June, the Norwegian Garnisonen i Sør-Varanger garrison heard the noise of powerful engines coming from the manoeuvres along the entire Soviet front of the Norwegian-Soviet border. Actual observations were not possible over the border in the dark. On that same night the GSV commanding officer ordered all GSV reserve forces to report to their emergency muster locations. The Soviet demonstration of strength lasted until 10 June, when the Soviet forces stood down.[6]

In 1979, Scott and Scott reported the headquarters address as Leningrad, L-13, Pod'ezdnoy Per., Dom 4.

The 36th Landing-Assault Brigade was under district control until June 1990, when it was transferred to the Soviet Airborne Troops. Becoming part of the Russian Airborne Troops as the country dissolved, it was active until February 1997. In 1990 the 37th MRD became a weapons and equipment storage base (seemingly by 1990), the 63rd Guards became the 56th Guards District Training Centre, and the 77th Guards was converted to a coastal defence division of the Northern Fleet by 1990.[11] It was then reorganised as a separate coastal defence brigade by 1 December 1994.

In 1993 the 5189th Base for Storage of Weapons and Equipment was disbanded.

The fall of the Soviet Union caused much reassessment of the Russian Federation’s military situation. Economic constraints have greatly hampered military effectiveness. Several formations, such as the 25th Motor Rifle Brigade, formed on 1 January 1993[13] from the disbanding 24th Tank Training Division at Riga, arrived in the district having been withdrawn from the former Baltic Military District. Since 1992 many formations and units of the District have participated in local conflicts and peace-keeping missions, especially in the North Caucasus.

In early December 1997, President Boris Yeltsin said in Sweden that Russia would make unilateral reductions to forces in the northwest, which included the Leningrad Military District. He promised that land and naval units would be reduced by 40 per cent by January 1999.[15] In May 1999, when Russian defense minister Marshal Igor Sergeyev confirmed that the cuts had taken place, Sergeyev said that the personnel of the Leningrad Military District had been drawn down by 52 per cent.[16] In terms of formations, the series of disbandments left the district almost unrecognisable.[11] The 6th Army’s staff at Petrozavodsk, the staff of the 30th Guards Army Corps at Vyborg, and all the motor rifle divisions previously in the district disbanded (including the 54th Guards MRD, reduced in size to a brigade and then which became a storage base, and the 64th Guards, reduced to a storage base). Left in their place were a number of weapons and equipment storage sites, and two motor rifle brigades (between January 1997 and June 1998 the 45th Guards MRD was reduced in size to become the 138th Guards Motor Rifle Brigade, and the 131st was reduced in size to become the 200th Independent Motor Rifle Brigade).[17]

The 138th Guards Motor Rifle Brigade at Kamenka was deployed for operations during the Second Chechen War, in which, along with other Russian Ground Forces units, its personnel was reported to have behaved badly at times.[19] A 22-year-old woman in Ingushetia was shot by drunken soldiers from the brigade scavenging for alcohol. The deployment of a tank battalion of the brigade was apparently halted when it was discovered that soldiers had been selling the explosive from their tanks' reactive armour. The second fully operational brigade in the district, the 200th Motor Rifle Brigade descends from the World War II-era 45th Rifle Division, which later became the 131st Motor Rifle Division.

According to Soldat.ru online forum conversation in August 2007, as from 1 December 2006 the 35th Base for Storage of Weapons & Equipment, a former motor rifle division, at Alakurtti, was disbanded.[20]

The Russian Airborne Troops' 76th Air Assault Division was also based within the district's boundaries, at Pskov. 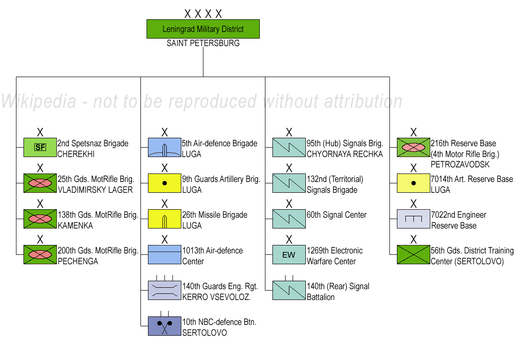 Structure and units of the Leningrad Military District 2010