Leo Henricus Arthur Baekeland FRSE(Hon) (November 14, 1863 – February 23, 1944) was a Belgian-born American chemist. He is best known for the inventions of Velox photographic paper in 1893 and Bakelite in 1907. He has been called "The Father of the Plastics Industry"[2]:13 for his invention of Bakelite, an inexpensive, nonflammable, versatile, and popular plastic, which marked the beginning of the modern plastics industry.[3][4]

Leo Baekeland was born in Sint-Martens-Latem, Belgium on November 14, 1863,[5] the son of a cobbler and a house maid.[6] He told The Literary Digest: "The name is a Flemish word meaning 'Land of Beacons.'"[7] He spent much of his early life in Ghent, Belgium. He graduated with honours from the Ghent Municipal Technical School and was awarded a scholarship by the City of Ghent[8]:102 to study chemistry at the University of Ghent, which he entered in 1880.[2]:13 He acquired a PhD maxima cum laude at the age of 21.[8]:102 After a brief appointment as Professor of Physics and Chemistry at the Government Higher Normal School in Bruges (1887-1889) he was appointed associate professor of chemistry at Ghent in 1889.[2]:14 Baekeland married Céline Swarts, the daughter of his professor Theodore Swarts and Celine (Platteau) Swarts, on August 8, 1889. They had three children, George, Nina, and Jenny.[9][10]

In 1889 Baekeland and his wife took advantage of a travel scholarship to visit universities in England and America.[1]:178[2]:14 They visited New York City, where he met Professor Charles F. Chandler of Columbia University and Richard Anthony, of the E. and H.T. Anthony photographic company. Professor Charles F. Chandler of Columbia University was influential in convincing Baekeland to stay in the United States.[11] Baekeland had already invented a process to develop photographic plates using water instead of other chemicals, which he had patented in Belgium in 1887;[2]:13 [8]:127–129 Anthony saw potential in the young chemist and offered him a job.[8]:130[12]

Baekeland worked for the Anthony company for two years, and in 1891 set up in business for himself as a consulting chemist.[8]:130 However, a spell of illness and disappearing funds made him rethink his actions and he decided to return to his old interest of producing a photographic paper that would allow enlargements to be printed by artificial light.[13] After two years of intensive effort he perfected the process to produce the paper, which he named "Velox"; it was the first commercially successful photographic paper. At the time the US was suffering a recession and there were no investors or buyers for his proposed new product, so Baekeland became partners with Leonard Jacobi and established the Nepera Chemical Company in Nepera Park, Yonkers, New York.[8]:131–135[12] 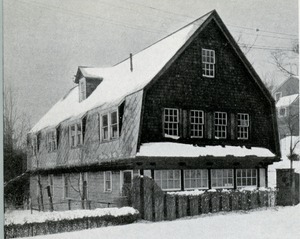 With a portion of the money he purchased "Snug Rock", a house in Yonkers, New York, where he set up his own well-equipped laboratory. There, he later said, "in comfortable financial circumstances, a free man, ready to devote myself again to my favorite studies... I enjoyed for several years that great blessing, the luxury of not being interrupted in one's favorite work."[17]

One of the requirements of the Nepera sale was, in effect, a non-compete clause: Baekeland agreed not to do research in photography for at least 20 years. He would have to find a new area of research. His first step was to return to Germany in 1900, for a "refresher in electrochemistry" at the Technical Institute at Charlottenburg.[2]:14

Upon returning to the United States, Baekeland was involved briefly but successfully in helping Clinton Paul Townsend and Elon Huntington Hooker to develop a production-quality electrolytic cell. Baekeland was hired as an independent consultant, with the responsibility of constructing and operating a pilot plant.[8]:138–139 Baekeland developed a stronger diaphragm cell for the chloralkali process, using woven asbestos cloth filled with mixture of iron oxide, asbestos fibre and iron hydroxide. Baekeland's improvements were important to the founding of Hooker Chemical Company and the construction of one of the world's largest electrochemical plants, at Niagara Falls.[2][17][18]

Having been successful with Velox, Baekeland set out to find another promising area for chemical development. As he had done with Velox, he looked for a problem that offered "the best chance for the quickest possible results".[17] Asked why he entered the field of synthetic resins, Baekeland answered that his intention was to make money.[11] By the 1900s, chemists had begun to recognize that many of the natural resins and fibers were polymeric, a term introduced in 1833 by Jöns Jacob Berzelius.[19][20] Adolf von Baeyer had experimented with phenols and aldehydes in 1872, particularly Pyrogallol and benzaldehyde.[21] He created a "black guck" which he considered useless and irrelevant to his search for synthetic dyes.[8]:115[22] Baeyer's student, Werner Kleeberg, experimented with phenol and formaldehyde in 1891, but as Baekeland noted "could not crystallize this mess, nor purify it to constant composition, nor in fact do anything with it once produced".[21]

Baekeland began to investigate the reactions of phenol and formaldehyde.[11] He familiarized himself with previous work and approached the field systematically, carefully controlling and examining the effects of temperature, pressure and the types and proportions of materials used.[2][8]:144–145

The first application that appeared promising was the development of a synthetic replacement for shellac (made from the excretion of lac beetles). Baekeland produced a soluble phenol-formaldehyde shellac called "Novolak" but concluded that its properties were inferior. It never became a market success, but still exists as Novolac.[3] 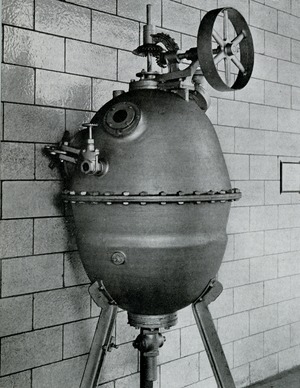 Baekeland continued to explore possible combinations of phenol and formaldehyde, intrigued by the possibility that such materials could be used in molding. By controlling the pressure and temperature applied to phenol and formaldehyde, he produced his dreamed-of hard moldable plastic: Bakelite.[3] Bakelite was made from phenol, then known as carbolic acid, and formaldehyde. The chemical name of Bakelite is polyoxybenzylmethylenglycolanhydride.[4] In compression molding, the resin is generally combined with fillers such as wood or asbestos, before pressing it directly into the final shape of the product. Baekeland's process patent for making insoluble products of phenol and formaldehyde was filed in July 1907, and granted on December 7, 1909. In February 1909 Baekeland officially announced his achievement at a meeting of the New York section of the American Chemical Society.[23]

In 1917 Baekeland became a professor by special appointment at Columbia University.[24]:87[25] The Smithsonian contains documents from the County of West Chester Court House in White Plains, NY, indicating that he was admitted to U. S. Citizenship on December 16, 1919.[26][27]

In 1922, after patent litigation favorable to Baekeland, the General Bakelite Co., which he had founded in 1910, along with the Condensite Co. founded by Aylesworth, and the Redmanol Chemical Products Co. founded by L.V. Redman, were merged into the Bakelite Corporation.[23] 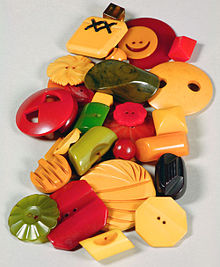 Colorful buttons made from Catalin, another variety of phenolic resin.

The invention of Bakelite marks the beginning of the age of plastics.[4] Bakelite was the first plastic invented that retained its shape after being heated. Radios, telephones and electrical insulators were made of Bakelite because of its excellent electrical insulation and heat-resistance. Soon its applications spread to most branches of industry.[4]

Baekeland received many awards and honors, including the Perkin Medal in 1916 and the Franklin Medal in 1940.[17] In 1978 he was posthumously inducted into the National Inventors Hall of Fame at Akron, Ohio.[10]

At Baekeland's death in 1944, the world production of Bakelite was ca. 175000tons, and it was used in over 15000 different products. He held more than 100 patents,[17] including processes for the separation of copper and cadmium, and for the impregnation of wood. 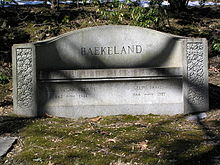 The gravesite of Leo Hendrik Baekeland

As Baekeland got older he became more eccentric, getting into fierce battles with his son and presumptive heir over salary and other issues. He sold the General Bakelite Company to Union Carbide in 1939 and, at his son's prompting, he retired. He became a recluse, eating all of his meals from cans and becoming obsessed with developing an immense tropical garden on his winter estate in Coconut Grove, Florida.[28] He died of a cerebral hemorrhage in a sanatorium in Beacon, New York.[29] Baekeland is buried in Sleepy Hollow Cemetery in Sleepy Hollow, New York.[30]