Leonid Nikolaievich Andreyev (Russian: Леони́д Никола́евич Андре́ев, 21 August [O.S. 9 August] 1871 – September 12, 1919) was a Russian playwright, novelist and short-story writer. He is one of the most talented and prolific representatives of the Silver Age period in Russian history. Andreyev's style combines elements of realist, naturalist and symbolist schools in literature.

Born in Oryol, Russia within a middle-class family, Andreyev originally studied law in Moscow and in Saint Petersburg. He became police-court reporter for a Moscow daily, performing the routine of his humble calling without attracting any particular attention. At this time he wrote poetry and made a few efforts to publish it but was refused by most publishers. In 1898 his first short story, "Bargamot and Garaska" ("Баргамот и Гараська"), was published in the "Kurier" newspaper in Moscow. This story came to the attention of Maxim Gorky who recommended that Andreyev concentrate on his literary work. Andreyev eventually gave up his law practice, fast becoming a literary celebrity, and the two writers remained friends for many years to come. Through Gorky, Andreyev became a member of the Moscow Sreda literary group, and published many of his works in Gorky's Znanie collections.[1]

Andreyev's first collection of short stories and short novels (повести) appeared in 1901, quickly selling a quarter-million copies and making him a literary star in Russia. In 1901 he published "Стена" ("The Wall"), 1902, he published "В тумане" ("In the Fog") and "Бездна" ("The Abyss,") which was a response to "The Kreutzer Sonata" by Leo Tolstoy. These last two stories caused great commotion because of their candid and audacious treatment of sex. In the years between 1898 and 1905 Andreyev published numerous short stories on many subjects, including life in Russian provincial settings, court and prison incidents (where he drew on material from his professional life), and medical settings. His particular interest in psychology and psychiatry gave him an opportunity to explore insights into the human psyche and to depict memorable personalities who later became classic characters of Russian literature ("Thought" 1902).

During the time of the first Russian revolution Andreyev actively participated in the social and political debate as a defender of democratic ideals. Several of his stories, including "The Red Laugh" ("Красный смех", 1904), Governor ("Губернатор", 1905) and The Seven Who Were Hanged ("Рассказ о семи повешенных", 1908) captured the spirit of this period. Starting from 1905 he also produced many theater dramas including The Life of Man (1906), Tsar Hunger (1907), Black Masks (1908), Anathema (1909), and The Days of Our Life (1909).[2] The Life of Man was staged by both Stanislavski (with his Moscow Art Theatre) and Meyerhold (in Saint Petersburg), the two main highlights of Russian theatre of the twentieth century, in 1907.[3]

Andreyev's works of the period after the revolution often represent the evocation of absolute pessimism and a despairing mood. By the beginning of the second decade of the century he began losing fame as new literary powers such as the Futurists were fast arising.

Aside from his political writings, Andreyev published little after 1914. In 1916, he became the editor of the literary section of the newspaper "Russian Will." He later supported the February Revolution, but foresaw the Bolshevik's coming to power as catastrophic. In 1917, he moved to Finland. From his house in Finland he addressed manifestos to the world at large against the excesses of the Bolsheviks. Idealist and rebel, Andreyev spent his last years in bitter poverty, and his premature death from heart failure may have been hastened by his anguish over the results of the Bolshevik Revolution. His last novel was Satan's Diary, but he died before he finished it.

A play, The Sorrows of Belgium, was written at the beginning of the War to celebrate the heroism of the Belgians against the invading German army. It was produced in the United States, as were the plays, The Life of Man (1917), The Rape of the Sabine Women (1922), He Who Gets Slapped (1922), and Anathema (1923). A popular and acclaimed film version of He Who Gets Slapped was produced by MGM Studios in 1924. Some of his works were translated into English by Thomas Seltzer.

Poor Murderer, an adaptation of his short story Thought made by Pavel Kohout, opened on Broadway in 1976. 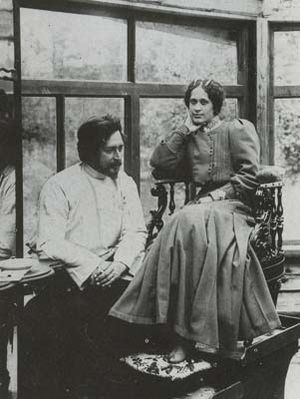 He was married to Alexandra Veligorskaia, a niece of Taras Shevchenko. She died died of puerperal fever in 1906. They had two sons Daniil Andreyev, a poet and mystic, author of Roza Mira and Vadim Andreyev. In 1908 Leonid Andreyev married Anna Denisevich, and decided to separate his two little boys, keeping Vadim with him and sending Daniil to live with Aleksandra's sister. Vadim Andreyev became a poet. He lived in Paris.