Leonid Aleksandrovich Govorov (Russian: Леони́д Алекса́ндрович Го́воров) (22 February [O.S. 10 February] 1897 – 19 March 1955) was a Soviet military commander. An artillery officer, he joined the Red Army in 1920. He graduated from several Soviet military academies, including the Military Academy of Red Army General Staff. He participated in the Winter War as a senior artillery officer.[1]

In World War II, Govorov rose to command an army in November 1941 during the Battle of Moscow. He commanded the Leningrad Front from April 1942 to the end of the war. He reached the rank of Marshal of the Soviet Union in 1944, was awarded the title of Hero of the Soviet Union and many other awards.[2]

Leonid Aleksandrovich Govorov was born into a peasant family of Russian ethnicity in the village of Butyrki in Vyatka Governorate (now in Kirov Oblast).[3] He attended a technical high school in Yelabuga and enrolled in the shipbuilding department of Petrograd Polytechnical Institute. In December 1916, however, he was mobilized and was sent to the Konstantinovskye Artillery School, from which he graduated in 1917. He became an artillery officer with the rank of podporuchik.[1]

When the Russian Revolution broke out and the Russian Army disintegrated, Govorov returned home, but was later conscripted into the White Guard army of Aleksandr Kolchak. He deserted in late 1919 and joined the Red Army in early 1920. In the Russian Civil War he served in the 51st Rifle Division, commanding an artillery battery. He was awarded the Order of the Red Banner in 1921.[1]

Govorov obtained further military education, graduating from the Artillery course in 1926, the Higher Academy course in 1930, and the Frunze Military Academy in 1933. In 1936, Govorov was among the first officers who attended the newly founded Military Academy of Red Army General Staff, from which he graduated in 1938.[4]

From 1936, he was head of artillery in the Kiev Military District. In 1938 he was appointed as lecturer in tactics at the Dzerzhinsky Artillery Academy. In 1939, he finished his first research publication.[5] This was the period of Joseph Stalin's Great Purge. Govorov was close to being arrested, but in the end survived thanks to the intervention of Mikhail Kalinin[6] and continued to rise in rank.[2]

In 1939 the Soviet-Finnish War broke out, and Govorov was appointed chief of artillery of the 7th Army, as his research while at Dzerzhinsky Artillery Academy was about assaulting and penetrating fortified enemy positions. He commanded the massive artillery assault that allowed the Soviet breakthrough along the Mannerheim Line in 1940. For this he was awarded the Order of the Red Star and promoted to the rank of division commander. He was then appointed Deputy Inspector-General of Artillery of the Red Army.[5]

After Nazi Germany invaded the Soviet Union in June 1941, Govorov commanded the Artillery on the Western Front in Belarus from August to October 1941. During the Battle of Moscow, he was appointed Chief of Artillery of the 5th Army, under the command of Major General Dmitri Danilovich Lelyushenko. After Lelyushenko was wounded on 18 October Govorov assumed command of the army. During the Soviet counter-offensives in the winter of 1941–42, his army liberated Mozhaisk. As a result, he was promoted to the rank of lieutenant-general of artillery.[7]

In April 1942 Govorov was appointed commander of the Leningrad Group of Forces of the Leningrad Front, which combined the former Leningrad and Volkhov Fronts.[8] In July, the Volkhov Front was re-established, and Govorov became the head of the entire Leningrad Front, replacing Lieutenant General M.S. Khosin. Leningrad had been cut off from the rest of the country since September 1941, and the Soviet forces were trying to lift the siege of Leningrad, which was causing colossal damage to the city and suffering to the civilian population. The Road of Life, which was the only means of supply to the city, was frequently cut by regular German and Finnish air strikes. Soviet forces launched several offensives in the region in 1942, but these failed to lift the siege. The Lyuban Offensive Operation resulted in the encirclement and destruction of most of the Soviet 2nd Shock Army.[9] In this situation, Govorov's background as an artilleryman was considered most valuable, since the city was under constant shelling, and one of Govorov's tasks was to launch an artillery counter-offensive against the German guns.[7]

As soon as he became the commander of the Leningrad Front in July 1942, Govorov mounted local attacks in several sectors of the front, while preparing a much larger offensive. Together with the Volkhov Front, the Leningrad Front would break the blockade of the city by eliminating the German positions south of Ladoga Lake, where only 16 kilometres (9.9 mi) separated the Leningrad and Volkhov Fronts. This position was called "the bottleneck". At the same time, German forces were planning Operation Northern Light (German: Nordlicht) to capture the city and link up with Finnish forces. To achieve that, heavy reinforcements arrived from Sevastopol, which the German forces had captured in July 1942.[10] Both sides were unaware of the other's preparations. As a result, the Soviet Sinyavino Offensive failed and the 2nd Shock army was decimated for the second time in a year, but the German forces suffered heavy casualties and canceled Operation Northern Light.[11] 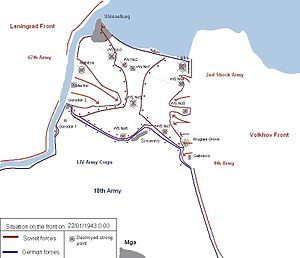 In late November 1942, Govorov began planning the next operation to break the blockade of Leningrad. In December, the plan was approved by the Stavka and received the codename Operation Iskra (Spark).[12] Operation Iskra began on 13 January 1943, and on 18 January Soviet forces linked up, breaking the blockade. By 22 January the front line stabilized. The operation successfully opened a land corridor 8–10 km wide to the city. A railroad was swiftly built through the corridor that allowed far more supplies to reach the city than the "Road of Life", eliminating the possibility of the capture of the city and a German-Finnish link up.[13] Govorov was promoted to Colonel General on 15 January and was awarded the Order of Suvorov 1st Class on 28 January.[14]

The Leningrad and Volkhov Fronts tried to follow up their success with a much more ambitious offensive operation named Operation Polyarnaya Zvezda (Polar Star). This operation had the aim of decisively defeating the German Army Group North, but achieved very modest gains.[15] Several other offensives were conducted by Govorov in the area in 1943, slowly expanding the corridor into Leningrad, and making other small gains.[16] In November 1943, Govorov began planning the Leningrad-Novgorod Offensive which would drive Army Group North out of the Leningrad region.[17] On 17 November he was promoted to army general.[1]

The Soviet offensive started on 14 January 1944. By 1 March the Leningrad, Volkhov and 2nd Baltic Fronts had driven Army Group North back up to 300 kilometres (190 mi) on a 400 kilometres (250 mi) front, liberating the southern Leningrad region and part of the Kalinin region.[18] By that time, the reinforced Germans forces were at the "Panther Line", stretching from Narva to Pskov using Lake Pskov as a barrier, where the offensive was stopped in several heavy battles around Narva.[18] On 18 April the Soviet forces were ordered to the defense, a new 3rd Baltic Front was created to coordinate operations near Narva and Govorov's Leningrad Front turned attention to the north.[19] In June 1944, during the Vyborg–Petrozavodsk Offensive, which led to Soviet recapture of Vyborg, Govorov was promoted to the rank of marshal of the Soviet Union. Later his forces recaptured the Baltic states, and in autumn 1944 his forces blocked Army Group North in what became known as Courland Pocket. On 27 January 1945, Govorov was awarded the title of Hero of the Soviet Union.[1]

In the postwar years Govorov was commander of the Leningrad Military District, and then Chief Inspector of Ground Forces. In 1948 he was appointed Commander of National Air Defense Forces, and in 1952 he also became Deputy Minister of Defense. In these posts he oversaw the modernization of the Soviet air defense system for the age of the jet aircraft and the atomic bomb. But Govorov was by this time suffering from chronic heart disease, and died in March 1955. He is buried in the Kremlin Wall Necropolis. A street in St Petersburg is named after him.[1]