Leonid Borisovich Kogan (Russian: Леони́д Бори́сович Ко́ган; Ukrainian: Леонід Борисович Коган; November 14, 1924 – December 17, 1982[1]) was a preeminent Soviet violinist during the 20th century. He is considered to have been one of the greatest representatives of the Soviet School of violin playing.

Kogan was born in Dnipropetrovsk, Ukraine, the son of a photographer who was an amateur violinist. After showing an early interest and ability for violin playing, his family moved to Moscow, where he was able to further his studies. From age ten he studied there with the noted violin pedagogue Abram Yampolsky. In 1934, Jascha Heifetz played concerts in Moscow. "I attended every one," Kogan later said, "and can remember until now every note he played. He was the ideal artist for me." When Kogan was 12, Jacques Thibaud was in Moscow and heard him play. The French virtuoso predicted a great future for Kogan.

At the age of 17, and while still a student, he performed throughout the USSR. He was co-winner of the first prize at the World Youth Festival in Prague. In 1951 Kogan won first prize at the Queen Elizabeth Competition in Brussels with a dazzling performance of Paganini's first concerto that included an outstanding interpretation of Sauret's cadenza.

His official debut was in 1941, playing the Brahms Concerto with the Moscow Philharmonic in the Great Hall of the Moscow Conservatory.

His international solo tours took him to Paris and London in 1955, and then South America and the USA in the following years. Kogan had a repertoire of over 18 concerti and a number of concerti by modern composers were dedicated to him.

In 1952, Kogan began teaching at the Moscow Conservatory, and in 1980 he was invited to teach at the Accademia Musicale Chigiana in Siena, Italy. 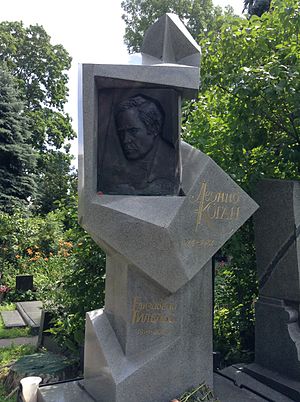 The tomb of Leonid Kogan

Kogan, a brilliant and compelling violinist, shunned publicity. His career was always overshadowed by that of David Oistrakh, who was strongly promoted by the Soviet authorities. Kogan was made an Honoured Artist in 1955 and a People's Artist of the USSR in 1964. He received the Lenin Prize in 1965.

Kogan married Elizabeth Gilels (sister of pianist Emil Gilels), also a concert violinist. His son, Pavel Kogan (b. 1952) became a famous violinist and conductor. His daughter, Nina Kogan (b. 1954), is a concert pianist and became the accompanist and sonata partner of her father at an early age.

Kogan died of a heart attack in the city of Mytishchi, while travelling by train between Moscow and Yaroslavl to a concert he was to perform with his son. Two days before, he had played the Beethoven Concerto in Vienna. He was buried in Novodevichy Cemetery.

Many speculate that Kogan played on all steel strings, though there is not an outright confirmation. While his close associates indicate he played on gut strings with a steel 'e', it is most likely that he used different combinations over the course of his career.

Kogan used two Guarneri del Gesù violins: the 1726 ex-Colin and the 1733 ex-Burmester. He used French bows by Dominique Peccatte. Kogan never actually owned these instruments; they were provided on loan from the Soviet government. Today they are worth more than $4 million USD.

Kogan formed a Trio with pianist Gilels and cellist Rostropovich. Their recordings include Beethoven's Archduke Trio, the Schumann D minor, the Tchaikovsky, the Saint-Saëns, the Brahms Horn Trio with Yakov Shapiro (horn), and the Fauré C minor Quartet with Rudolf Barshai (viola). Kogan later formed another Trio with the conductor Svetlanov on piano and cellist Luzanov. Kogan was the first Soviet violinist to play and record Berg's Violin concerto. He also made a famous recording of Khachaturian's violin concerto with Pierre Monteux and the Boston Symphony Orchestra for RCA Victor (his America debut recording), a version still considered the most exciting reading of the work. Kogan recorded violin concerti by other Soviet composers, including the two by Tikhon Khrennikov. With Karl Richter Kogan recorded J.S Bach's 6 Violin Sonatas in 1972. There are more than 30 albums of his performances on the Arlecchino label. In 2006, EMI France issued a 4-CD box set ("Les Introuvables de Leonid Kogan") containing his concerto recordings for that label, all digitally remastered the same year.