His presidency was surrounded by numerous corruption scandals and the lessening of media freedoms. Corruption accelerated after Kuchma's election in 1994, but in 2000–2001, his power began to weaken in the face of exposures in the media.[3]

On his watch the Ukrainian economy continued to decline until 1999, whereas growth was recorded since 2000, bringing relative prosperity to some segments of urban residents. During his presidency, Ukrainian-Russian ties began to improve.[4]

After a successful career in the machine-building industry of the Soviet Union, Kuchma began his political career in 1990, when he was elected to the Verkhovna Rada (the Ukrainian parliament); he was re-elected in 1994.[5] He served as Ukrainian Prime Minister between October 1992 and September 1993.[5]

Since July 2014, Kuchma has been the representative of Ukraine on the semi-official peace talks regarding the ongoing War in Donbass.

Leonid Kuchma was born in the village of Chaikine in rural Chernihiv Oblast.[6] His father Danylo Prokopovych Kuchma (1901–1942) was wounded in World War II and eventually died of his wounds in the field hospital #756 (near the village of Novoselytsia) when Leonid was four.[7][8] His mother Paraska Trokhymivna Kuchma worked at a kolhoz. Kuchma attended the Kostobobrove general education school in the neighboring Semenivka Raion. Later he enrolled in Dnipropetrovsk National University and graduated in 1960 with a degree in mechanical engineering (majoring in aerospace engineering).[9] The same year he joined the Communist Party of Soviet Union.[10] Kuchma is a candidate of technical sciences.

After graduation, Kuchma worked in the field of aerospace engineering for the Yuzhnoye Design Bureau in Dnipropetrovsk. At 28 he became a testing director for the Bureau deployed at the Baikonur cosmodrome.

Some political observers suggested that Kuchma's early career was significantly boosted by his marriage to Lyudmila Talalayeva, an adopted daughter of Gennadiy Tumanov, the Yuzhmash chief engineering officer and later the Soviet Minister of Medium Machine Building.[12][13]

In 1982 Kuchma was appointed the first deputy of general design engineer at Yuzhmash, and from 1986 to 1992, he held the position of the company's general director. From 1990 to 1992, Kuchma was a member of the Verkhovna Rada (Ukraine's parliament). In 1992 he was appointed as Prime Minister of Ukraine.[14] He resigned a year later, complaining of "slow pace of reform".[14] He was re-elected into parliament in 1994.[5]

Kuchma resigned from the position of Prime Minister of Ukraine in September 1993 to run for the presidency in 1994 on a platform to boost the economy by restoring economic relations with Russia and faster pro-market reforms. Kuchma won a clear victory against the incumbent President Leonid Kravchuk, receiving strong support from the industrial areas in the east and south. His worst results were in the west of the country.[14]

Kuchma was re-elected in 1999 to his second term.[5][14] This time the areas that gave him strongest support last time voted for his opponents, and the areas which voted against him last time came to his support.[14]

He was re-elected in 1999 to his second term. Opponents accused him of involvement in the killing in 2000 of journalist Georgiy Gongadze (see also SBU, "Cassette Scandal", Mykola Mel'nychenko), which he has always denied. Critics also blamed Kuchma for restrictions on press freedom. Kuchma is believed to have played a key role in sacking the Cabinet of Viktor Yushchenko by Verkhovna Rada on 26 April 2001. 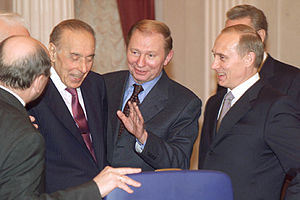 President Vladimir Putin with Leonid Kuchma, in the centre, and Azeri President Heydar Aliyev before an expanded meeting of the CIS Council of Heads of State.

In 2002 Kuchma stated that Ukraine wanted to sign an association agreement with the European Union (EU) by 2003–2004 and that Ukraine would meet all EU membership requirements by 2007–2011.[16] He also hoped for a free-trade treaty with the EU.[16]

In his inaugural address Kuchma said:

Historically, Ukraine is part of the Euro-Asian cultural and economics space. Ukraine's vitally important national interests are now concentrated on this territory of the former Soviet Union. ... We are also linked with... the former republics of the Soviet Union by traditional scientific, cultural and family ties... I am convinced that Ukraine can assume the role of one of the leaders of Euro-Asian economic integration.[17]

Kuchma signed a "Treaty of Friendship, Cooperation, and Partnership" with Russia, and endorsed a round of talks with the CIS. Additionally, he referred to Russian as "an official language". He signed a special partnership agreement with NATO and raised the possibility of membership of the alliance.

After Kuchma's popularity at home and abroad sank as he became mired in corruption scandals, he turned to Russia as his new ally. He said that Ukraine needed a "multivector" foreign policy that balanced eastern and western interests[citation needed].

Kuchma and the Cassette Scandal

From 1998 to 2000, Kuchma's bodyguard Mykola Mel'nychenko was allegedly eavesdropping Kuchma's office, later publishing the recordings. The release of the tapes – dubbed "Kuchmagate" by the Ukrainian press – supposedly revealed Kuchma's numerous crimes. In particular, his approving the sale of radar systems to Saddam Hussein (among other illegal arms sales) and ordering the Ukraine's police minister to "take care" of the journalist Georgiy Gongadze. 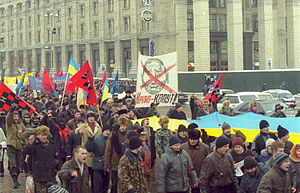 In September 2000, Gongadze disappeared and his headless corpse was found mutilated on 3 November 2000. On 28 November, the opposition politician Oleksandr Moroz publicised the tape recordings implicating Kuchma in Gongadze's murder. In 2005 the Ukrainian Prosecutor General’s office instigated criminal proceedings against Kuchma and members of his former administration in connection with the murder of Gongadze.[18] In 2005 the press reported that Kuchma had been unofficially granted immunity from prosecution in return for his graceful departure from office in 2005.[19][20]

Critics of the tape point to the difficulty of Mel'nychenko recording 500 hours of dictaphone tape unaided and undetected, the lack of material evidence of said recording equipment, and other doubts which question the authenticity and motive of the release of the tape. Kuchma acknowledged in 2003 that his voice was one of those on the tapes, but claimed the tapes had been selectively edited to distort his meaning.[21]

The General Prosecutor of Ukraine's Office canceled its resolution to deny opening of criminal cases against Kuchma and other politicians within the Gongadze-case on 9 October 2010.[22] On 22 March 2011, Ukraine opened an official investigation into the murder of Gongadze and, two days later, Ukrainian prosecutors charged Kuchma with involvement in the murder.[23][24] A Ukrainian district court ordered prosecutors to drop criminal charges against Kuchma on 14 December 2011 on grounds that evidence linking him to the murder of Gongadze was insufficient.[25] The court rejected Mel'nychenko's recordings as evidence.[26] Gongadze's widow Myroslava Gongadze lodged an appeal against the ruling one week later.[27]

First Deputy Prosecutor General of Ukraine Renat Kuzmin claimed 20 February 2013 that his office had collected enough evidence confirming Kuchma's responsibility for ordering Gongadze's assassination.[30] Kuchma's reply the next day was, "This is another banal example of a provocation, which I've heard more than enough in the past 12 years".[30]

Role in the election crisis of 2004

Kuchma's role in the election crisis of 2004 is not entirely clear. After the second round on 22 November 2004, it appeared that Yanukovych had won the election by fraud, which caused the opposition and independent observers to dispute the results, leading to the Orange Revolution.

Kuchma was urged by Yanukovych and Viktor Medvedchuk (the head of the presidential office) to declare a state of emergency and hold the inauguration of Yanukovych. He denied the request. Later, Yanukovych publicly accused Kuchma of a betrayal. Kuchma refused to officially dismiss Prime Minister Yanukovych after the parliament passed a motion of no confidence against the Cabinet on 1 December 2004. Soon after, Kuchma left the country. He returned to Ukraine in March 2005.

Kuchma said in October 2009 he would vote for Victor Yanukovych at the Ukrainian presidential election, 2010.[31] In a document dated 2 February 2010 uncovered during the United States diplomatic cables leak, Kuchma in conversation with United States Ambassador to Ukraine John F. Tefft, called the voters' choice between Yanukovych and Yulia Tymoshenko during the second round of the 2010 presidential election as a choice between “bad and very bad" and praised (the candidate eliminated in the first round of the election) Arseniy Yatsenyuk instead.[32]

As of September 2011, Kuchma believes that Yanukovych was the real winner of the 2004 election.[33]

Leonid Kuchma has been active in politics since his presidency ended. He aligned himself with former President Viktor Yushchenko in the 2005 presidential election.[34] The affiliation appeared over when Kuchma raised concerns about the president in correspondence with then U.S. Ambassador to the Ukraine, John Tefft.[35] Kuchma endorsed Yanukovych for president in 2010.[36]

Involvement in the 2014 pro-Russian conflict in Ukraine

Kuchma represented Ukraine at negotiations with the armed separatist in the Donetsk and Luhansk provinces on 21 June 2014 to discuss President Petro Poroshenko peace plan.[37][38][38] His role as a diplomat has been received positively by the west and Russia as well as the public in Ukraine.[39]

On 11, February 2015, Kuchma was one of the signatories of a draft plan to end the conflict in Donbas. The summit was known as Minsk II. The plan ensured that a ceasefire was implemented and reaction from leaders in Europe was generally positive.[40]

In March 2015, Kuchma delivered an address and called on the west for greater involvement in the region.[41] He criticized the action of Russian backed forces in the attempt to seize the town of Debaltseve.[42]

In September, 2015 Kuchma was again appointed as the representative for Ukraine at the Trilateral Contact Group. The group met in Belarus to discuss ending the conflict in Donbas. The choice of Kuchma comes nearly a decade after his presidency ended.

Aides and advisors that became public figures after or before

Leonid Kuchma is married to Lyudmyla Kuchma since 1967.[11] She is the Honorary President of the National Fund of Social Protection of Mothers and Children, "Ukraine to Children"[44] and is also known as a paralympic movement in Ukraine supporter.[11]

Kuchma's only child, daughter Olena Pinchuk, is married to Viktor Pinchuk, a Jewish industrialist and philanthropist whose Victor Pinchuk Foundation regularly hosts Ukraine-dedicated and philanthropic fora at the annual World Economic Forum in Davos. Olena Pinchuk has a son Roman (born in 1991, from her previous marriage with Ukrainian businessman Igor Franchuk) who attends Brown University, and two daughters with Viktor Pinchuk, Katerina (born in 2003) and Veronica (2011). Olena Pinchuk founded the ANTIAIDS Foundation in 2003.[45] According to the Ukrainian magazine Focus, Olena Pinchuk was amongst the "top 10 most influential women" in Ukraine as of 2010.[46]

Kuchma was an amateur guitar player in his younger years. He was also known for his skill at the complicated card game preferans.

After retirement, Kuchma was allowed to keep the state-owned dacha in Koncha-Zaspa for his personal use upon completion of his state duties.[47] The government order #15-r that would allow for Kuchma to keep his estate was signed by the acting prime-minister Mykola Azarov on 19 January 2005. Kuchma was also allowed to keep his full presidential salary and all the service personnel, along with two state-owned vehicles. That order also stated that these costs would be paid out of the state budget.

Kuchma was awarded the Azerbaijani Istiglal Order for his contributions to Azerbaijan-Ukraine relations and strategic cooperation between the states by President of Azerbaijan Heydar Aliyev on 6 August 1999.[48]