Leonid Petrovich Telyatnikov (Леонид Петрович Телятников; January 25, 1951, in Vvedenka, Kostanai Province, Kazakhstan – December 2, 2004, in Kiev, Ukraine) was the head of the fire department at the Chernobyl Nuclear Power Plant and led the team of firefighters to the fire at reactor number 4 which became the Chernobyl disaster. Despite the radiological dangers, they had no radiation suits, no respirators, and no working dosimeters. From results of a blood test it was estimated he received 4 grays of radiation.

According to one source,[1] Telyatnikov headed the fire fighting effort at Chernobyl Reactor Unit 4 after the explosion on April 26, 1986. At that time Telyatnikov was the chief of military fire prevention at the Chernobyl nuclear-power station. Telyatnikov and his subordinates ascended the badly damaged and heavily radiation contaminated roof of Reactor Unit 4 more than once in order to prevent the fires from spreading and endangering Reactor Unit 3.

Major Leonid Telyatnikov, the commander of Fire Station No. 2, was on holiday, but he lived in Prypiat and had received the alarm signal by telephone. He arrived at the reactor site about 10 minutes after the firemen had begun their battle and he then took overall command. He climbed onto the roof of Reactor Unit 3. Although there were at least five fires on the roof, the reactor was still operating. The priorities of the firemen were clear — they had to extinguish the fires on the roof of the undamaged reactor and in the machine hall. They used mainly water to do this. Despite their efforts, they could not prevent the fire from spreading before the Kiev fire brigade arrived to replace them.[2] 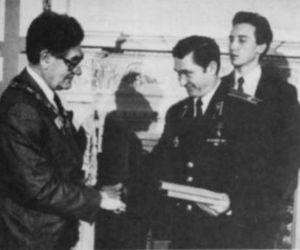 The President of the British Fire Services Association presenting the Order of Gallantry, for bravery, to Major Telyatnikov, the Commander of the Chernobyl Fire Brigade.

In 1987 Telyatnikov was named a Hero of the Soviet Union. Two of his subordinates, Vladimir Pravik and Viktor Kibenok, were given the award posthumously, as they died from acute radiation sickness soon after the disaster.

Telyatnikov continued his service in the Ministry of the Interior of the USSR, and, following the collapse of the Soviet Union, in Ukraine. In 1998, Telyatnikov headed the volunteer fire department of Kiev, and designed the "Junior Firefighter" program. He died of cancer at the age of 53. His death has been attributed to radiation exposure, and he is listed as a casualty of the Chernobyl disaster.

On April 25, 2006, the twentieth anniversary of the Chernobyl disaster, a monument was dedicated to him at the Baykove cemetery in Kiev where he is buried.