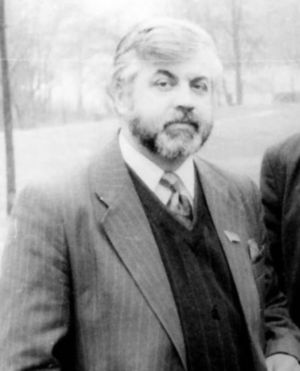 Leonid (Les) Stepanovych Tanyuk (Ukrainian: Леонід (Лесь) Танюк, August 7, 1938 – March 18, 2016[1]) was a Ukrainian theatre and film director and formerly a dissident and the head of the Club of Creative Youth.

He was a husband of Nelli Korniyenko, a native of Khabarovsk and Merited worker of arts of Ukraine.

Tanyuk was born in Zhukyn, Dymer Raion (liquidated), Kiev Oblast, the son of Stephen Samiylovych, a teacher of Ukrainian language and literatures. His mother was Natalya Mykolayivna, also a teacher of languages. After spending some of his childhood in a Nazi concentration camp, he and his family returned to Ukraine, but they were not allowed to live in Kiev. They returned to his fathers hometown of Lutsk.

He studied at the National University of Theatre, Film and TV in Kiev.

In 1959, Tanyuk was one of the founders of the Club of Creative Youth (Клуб творчої молоді) in Kiev. He was elected the clubs first president. Under his leadership, the group was active in promoting Ukrainian culture and protesting Soviet totalitarianism. He and other members were made demands to the Soviet authorities to preserve Churches and other monuments that faced destruction. In 1962, he and fellow members Vasyl Symonenko and Alla Horska were sent to investigate information about mass graves in Bykivnia from the 1930s terror implemented by Joseph Stalin. After questioning the locals, they wrote a letter to the authorities demanding an investigation into the executions and the burials. It was at this point that the Soviets began to exert strong pressure on the club, and Tanyuk was removed as president, though he effectively continued to lead the organization until it was closed in 1964.

During the early 1960s, Tanyuk travelled around Ukraine and produced numerous drama productions which were later banned. He also established clubs similar to the Club of Creative Youth outside of Kiev.

From 1991 till his death Tanyuk was Chairman of the Union of theatrical figures of Ukraine.[2]