Brigadier Leslie Wilton Andrew, VC, DSO (23 March 1897 – 8 January 1969) was a senior officer in the New Zealand Military Forces and a recipient of the Victoria Cross, the highest award of the British Commonwealth for gallantry "in the face of the enemy". He received the decoration for his actions during the Battle of Passchendaele in 1917.

Born in 1897, Andrew joined the New Zealand Expeditionary Force in 1915, having gained military experience while serving with the Territorial Force. He served on the Western Front from September 1916 to early 1918, and ended the war as a commissioned officer in England. He remained in the military after the cessation of hostilities, and joined the New Zealand Staff Corps. He held staff and administrative positions in New Zealand and, while on an officer exchange program, British India.

Following the outbreak of the Second World War, Andrew was appointed commander of the 22nd Battalion, which he led during the Battles of Greece, Crete and the early part of the North African Campaign. For a short period in late 1941 he commanded an infantry brigade of the 2nd New Zealand Division, and received the Distinguished Service Order for his leadership. He returned to New Zealand in 1942 and commanded the Wellington Fortress Area for the remainder of the war. He retired from the military in 1952 with the rank of brigadier, and died in 1969 aged 71.

Leslie Andrew was born on 23 March 1897 in Ashhurst in the Manawatu region of New Zealand, the son of a local school headmaster. He grew up in Wanganui, where his father had moved his family having taken up a position in the area, and was educated at Wanganui Collegiate School. After leaving school he was employed by the New Zealand Railways Department as a clerk.[1] He participated in the cadet program while at school, and later joined the Territorial Force. By 1915, he had been promoted to sergeant and had sat the necessary exams to become a commissioned officer in the Territorials.[2]

Andrew volunteered for the New Zealand Expeditionary Force (NZEF) in October 1915. Because only men between the ages of 19 and 45 were required to register for service with the NZEF, he falsified his age to ensure that he would be eligible for duty overseas. A member of the 12th Reinforcements, he embarked for the Western Front via Egypt on 1 May 1916. In France, he was posted to B Company, Wellington Infantry Battalion with the rank of private.[2]

Andrew's arrival at the front coincided with the start of the Somme Offensive. He participated in the Battle of Flers-Courcelette, which began on 15 September, and was wounded. Promoted to corporal in January 1917, he took part in the Battle of Messines the following June.[2] 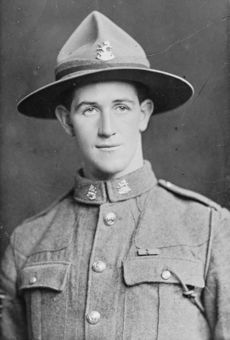 Andrew after receiving his VC, in 1918

During the early phase of the Battle of Passchendaele, Andrew's battalion was engaged in fighting around the village of La Basseville, a few kilometres southwest of Messines. Originally captured by the New Zealanders prior to the battle on 26 July, the village had been re-taken by the Germans the next day. Under cover of an artillery barrage, the Wellingtons began an advance towards the village. Andrew was tasked with leading two sections to destroy a machine-gun post. During the advance, he noticed another machine-gun post that was holding up the advance of another platoon. On his own initiative, he promptly diverted his force and removed the newly spotted threat with a flanking attack. He then continued with his men to his original objective. Braving continuous gunfire, he and his men captured the machine-gun post. While most of his men withdrew with the gun, he and another man[Note 1] continued to scout further forward. Coming across another machine-gun post, the two men destroyed it before returning to their lines with useful information on the increasing numbers of Germans in the area.[2]

It was for his leadership and bravery during these actions that Andrew was awarded the Victoria Cross (VC) at the age of 20. The citation read as follows:

For most conspicuous bravery when in charge of a small party in an attack on the enemy's position. His objective was a machine-gun post which had been located in an isolated building. On leading his men forward he encountered unexpectedly a machine-gun post which was holding up the advance of another company; he immediately attacked, capturing the machine gun and killing several of the crew. He then continued the attack on the machine gun post which had been his original objective. He displayed great skill and determination in his disposition, finally capturing the post, killing several of the enemy and putting the remainder to flight. Cpl. Andrew's conduct throughout was unexampled for cool daring, initiative, and fine leadership, and his magnificent example was a great stimulant to his comrades.

Andrew was promoted to sergeant the day after his VC-winning action. He continued to serve on the front until early 1918, when he was sent to England for officer training. He was commissioned as a second lieutenant in March 1918, but remained in England until the end of the war.[2] 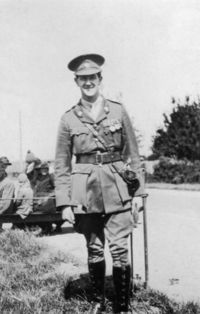 While in England, Andrew met Bessie Ball, of Nottingham, and they were married on 12 November 1918. The couple had five children although one died in infancy. Upon discharge from the NZEF in August 1919, he joined the New Zealand Staff Corps and served in a number of administrative positions for the next several years. From 1927 to 1929 he served with the Highland Light Infantry in British India on an officer exchange program. On his return to New Zealand he was appointed adjutant of the 1st Wellington Regiment. In 1937, having been promoted to captain, he commanded the New Zealand contingent sent to London for the coronation of King George VI and Queen Elizabeth.[2]

Following the outbreak of the Second World War, Andrew was seconded to the 2nd New Zealand Expeditionary Force.[5] In early 1940, he was appointed commander of 22nd Battalion, then forming at Trentham Military Camp near Wellington. He trained his new command hard, and quickly earned the nickname of February due to his habit of issuing 28-day detentions for any breaches in discipline.[6]

The battalion embarked for England in May 1940 as part of 5th Infantry Brigade, 2nd New Zealand Division. Arriving in June, it spent the remainder of the year on garrison duties in the south of England. In March 1941 it travelled for Egypt and then onto Greece.[7] Andrew led the battalion through the subsequent Battle of Greece, during which it saw little action, and the Battle of Crete.[5]

In Crete, the battalion was tasked with the defence of Maleme airfield and the overlooking hill, Point 107. Andrew was ordered to maintain control of his positions "at all costs". Forced to disperse the companies of his battalion widely to cover his positions, he lost contact with most of his units after German paratroopers began landing in the area on 20 May. Failing to receive any support from his brigade commander following a request for assistance, and fearing most of his command overrun after a failed counterattack by his small reserve, he withdrew his remaining units. As it happened, most of his forward companies remained intact and were subsequently able to withdraw themselves after finding they had been abandoned. Andrew was criticised for his withdrawal, which led to the loss of Maleme airfield. This was a significant factor in allowing the German forces to become established on Crete. He and the surviving elements of his battalion were later evacuated from Crete.[5]

Despite the setback of Crete, Andrew remained as commander of 22nd Battalion during the early phases of the North African Campaign. At one stage he was temporary commander of 5th Infantry Brigade when its nominal commander, Brigadier James Hargest, was captured in late November 1941. Andrew was awarded with the Distinguished Service Order for his leadership of the brigade, which had to deal with repeated attacks by German forces in early December. He relinquished command of 22nd Battalion on 3 February 1942, and returned to New Zealand.[2] He was promoted to full colonel and commanded the Wellington Fortress Area for the rest of the war.[5]

Andrew commanded the New Zealand contingent for the 1946 Victory Parade in London, and the following year attended the Imperial Defence College. He was promoted to brigadier in 1948 and appointed commander of the Central Military District. He remained in this capacity until his retirement from the military in 1952. Andrew was later invited to run for Parliament but declined. He died on 8 January 1969, aged 71. He was buried with full military honours in a ceremony at Levin RSA Cemetery, in Levin, New Zealand.[8]

Andrew's VC was displayed at the QEII Army Memorial Museum, Waiouru, New Zealand. On 2 December 2007 it was one of nine Victoria Crosses that were among a hundred medals stolen from the museum.[9] On 16 February 2008, New Zealand Police announced all the medals had been recovered as a result of a NZ$300,000 reward offered by Michael Ashcroft and Tom Sturgess.[10]