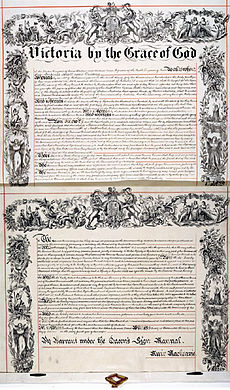 Letters patent issued by Queen Victoria in 1900, creating the office of Governor-General of Australia as part of the process of Federation 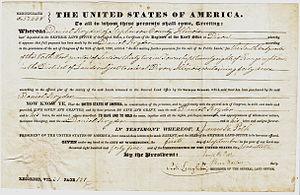 Letters patent (always in the plural) are a type of legal instrument in the form of a published written order issued by a monarch, president, or other head of state, generally granting an office, right, monopoly, title, or status to a person or corporation. Letters patent can be used for the creation of corporations or government offices, or for the granting of city status or a coat of arms. Letters patent are issued for the appointment of representatives of the Crown, such as Governors and Governors-General of Commonwealth realms, as well as appointing a Royal Commission. In the United Kingdom they are also issued for the creation of peers of the realm. A particular form of letters patent has evolved into the modern patent (referred to as a utility patent or design patent in United States patent law) granting exclusive rights in an invention (or a design in the case of a design patent). Clearly in this case it is essential that the written grant should be in the form of a public document so other inventors can consult it to avoid infringement and also to understand how to "practice" the invention, i.e., put it into practical use.

The opposite of letters patent are letters close (Latin: litterae clausae), which are personal in nature and sealed so that only the recipient can read their contents. Letters patent are thus comparable to other kinds of open letter in that their audience is wide. It is not clear how the contents of letters patent became widely published before collection by the addressee, for example whether they were left after sealing by the king for inspection during a certain period by courtiers in a royal palace, who would disseminate the contents back to the gentry in the shires through normal conversation and social intercourse. Clearly some such mechanism was essential. Today, for example, it is a convention for the British prime minister to announce that he has left a document he wishes to enter the public domain "in the library of the House of Commons", where it may be freely perused by all Members of Parliament.

Letters patent are so named from the Latin verb pateo, to lie open, exposed, accessible.[1] The originator's seal was attached pendent from the document, so that it did not have to be broken in order for the document to be read.

Litterae in Latin meant "that which is written" or "writing", in the sense of letters of the alphabet placed together in meaningful sequence on a writing surface, not a specific format of composition as the modern word "letter" suggests. Thus letters patent do not equate to an open letter but rather to any form of document, deed, contract, letter, despatch, edict, decree, epistle etc.[2] made public.

They are called "letters" (plural) from their Latin name litterae patentes, used by medieval and later scribes when the documents were written in Latin, in the ancient sense of a collection of letters of the alphabet arranged to be read rather than in the modern sense of an "epistle" or item of correspondence: thus no singular form exists.[3]

Letters patent are a form of open or public proclamation[4] and a vestigial exercise of extra-parliamentary power by a monarch or president. Prior to the establishment of parliament, the monarch ruled absolutely by the issuing of his personal written orders, open or closed.

They can thus be contrasted with the Act of Parliament, which is in effect a written order by parliament, approved by the monarch whose signature gives it force. No explicit government approval is contained within letters patent, only the seal or signature of the monarch.

Parliaments today tolerate only a very narrow exercise of the royal prerogative by issuance of letters patent, and such documents are issued with prior informal government approval, or indeed are now generated by government itself with the monarch's seal affixed as a mere formality. In their original form they were simply written instructions or orders from the sovereign, whose order was law, which were made public to reinforce their effect.

For the sake of good governance it is clearly of little use if the sovereign appoints a person to a position of authority if he does not at the same time inform those over whom such authority is to be exercised of the validity of the appointment.

According to the United Kingdom Ministry of Justice, there are 92 different types of letters patent.[5] The Patent Rolls are made up of office copies of English (and later United Kingdom) royal letters patent, which run in an almost unbroken series from 1201 to the present day, with most of those to 1625 having been published.

The use of letters patent in making royal proclamations has been reduced by order of a statutory instrument (number 1730) issued by Queen Elizabeth II at the Court at Buckingham Palace, the 15th day of July 1992 in the presence of the privy council. It is known as "The Crown Office (Forms and Proclamations Rules) Order 1992"[6] and was laid before parliament on 23 July 1992. It was issued in exercise of the powers conferred on the monarch by section 3 of the Crown Office Act 1877. Article 3 of this Order is entitled "Publication of Royal Proclamations" and states:

It shall be sufficient for Royal Proclamations to be published in the London, Edinburgh and Belfast Gazettes; but if the Lord President of the Council, thinking it expedient, directs that copies of such proclamations shall in addition be sent to such High Sheriffs, Sheriffs, Lord Mayors and Mayors in England and Wales and to such Sheriffs Principal in Scotland as he thinks fit, the contents of such proclamations shall thereupon be made known in the manner accustomed.

The form of letters patent for creating peerages has been fixed by the same statutory instrument. Part III of the schedule lays down nine pro forma texts for creating various ranks of the peerage, lords of appeal and baronets.

The following table organises the text from the letters patent by columns for each rank, with common text spanning multiple columns, depicting some of the similarities and differences among the proclamations. Gender-specific differences are highlighted in italics.

The words "may have hold and possess" to "his heirs male aforesaid successively" and "have heretofore used and enjoyed or as they" (shown in brackets above) were deleted by the Crown Office (Forms and Proclamations Rules) (Amendment) Order 2000.[8]

In Commonwealth realms, letters patent are issued under the prerogative powers of the head of state, as an executive or royal prerogative. They are a rare, though significant, form of legislation which does not require the consent of parliament. Letters patent may also be used to grant Royal Assent to legislation.

The primary source of letters patent in the United States are intellectual property patents and land patents, though letters patent are issued for a variety of other purposes. They function dually as public records and personal certificates.

In the United States, the forgery of letters patent granted by the President is a crime subject to fine, imprisonment up to ten years or both (18 U.S.C. § 497). Without letters patent, a person is unable to assume an appointed office. Such an issue prompted the Marbury v. Madison suit, where William Marbury and three others petitioned the United States Supreme Court to order James Madison to deliver their letters for appointments made under the previous administration.

American letters patent generally do not fit a specific form, except for the eschatocol, or formal ending: