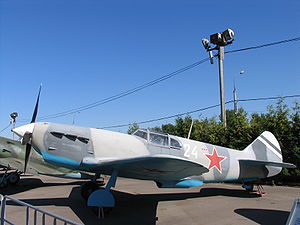 a LaGG-3 as flown by Shestakov.

Upon graduating from military college in 1936 he applied for combat in Spain, joining a Spanish Republican Air Force fighter squadron in 1937. Flying Polikarpov I-16s he claimed eight solo victories and 31 collaborative (shared) victories gained in 90 sorties during the Spanish Civil War.

Shestakov joined 69 IAP in September 1939, and was at the time one of the most famous Soviet aces.

At the time of the German invasion of the Soviet Union in June 1941, Shestakov was serving with 69 IAP (Fighter Aviation Regiment) on the Odessa front, and became the Regiment Leader on 16 July 1941. During the battle for Odessa 69 IAP pilots achieved 94 air victories. The losses inflicted on the Romanian Air Force above Odessa in 1941 by Shestakov's fighter pilots compelled the Romanian High Command to withdraw its entire air force from the Eastern Front.

At the end of 1941 69 IAP received the LaGG-3 to replace the outdated I-16 and relocated to the Stalingrad area. Over the next three years he held other commands in various regions, including Stalingrad.

Shestakov eventually flew more than 200 missions during the war, took part in 32 aerial combats and was credited with 26 kills before being killed in action on 13 March 1944.

On 13 March 1944 (other sources state 12 March), he intercepted German bombers but was never seen again.

After the war, fellow ace Vladimir Lavrinenkov wrote a book about Shestakov called "His Call code - Sokol (Falcon) 1". According to Lavrinenkov's book, Shestakov fought a private war with a well-known Stuka ace - a 'Kurt Renner', who was awarded 'the Golden Knight's Cross'.

No such Stuka ace existed, although the Stuka ace Hans-Ulrich Rudel - the only person to be awarded the Knight's Cross with the Golden Oak Leaves - flew over the same operational area as Shestakov. Shestakov apparently tried to shoot him down during the first months of 1944, and reportedly searched for a Ju 87 with a viper painted along its fuselage, assuming that this conspicuous aircraft was flown by Renner/Rudel.

After his death, it was rumoured that he died seconds after shooting at Rudel's plane, but given that Rudel was never shot down by enemy aircraft in his career, Shestakov could not have done any serious damage to Rudel's aircraft had he in fact ever attacked it. Rudel himself speculates in his autobiography:

Was he shot down by Gadermann [Rudel's rear gunner], or did he go down because of the backwash from my engine during these tight turns? It doesn't matter. My headphones suddenly exploded in confused screams from the Russian radio; the Russians have observed what happened and something special seems to have happened... From the Russian radio-messages, we discover that this was a very famous Soviet fighter pilot, more than once appointed as Hero of the Soviet Union. I should give him credit: he was a good pilot.[1]

His 26 victories in World War II raised his career total to 65, including shared. During his service he flew over 200 combat missions, took part in 32 air combats, killing 15 enemy pilots.

According to research by Tomas Polak and Christopher Shores, Shestakov rates as The Soviet Union's all-time second-ranking fighter pilot, ahead of Ivan Kozhedub (62) and behind Vasiliy Naydenko (99). Most other lists rank Naydenko much lower, with Kozhedub first.