Levantine Sea is the name of the easternmost part of the Mediterranean Sea.

The Levantine Sea is bordered by Turkey in the north, Syria, Lebanon, Israel and the Gaza Strip in the east, Egypt and Libya in the south, and the Aegean Sea in the northwest. The western border to the open Mediterranean (there also called Libyan Sea) is defined as a line from the cape Ra's al-Hilal in Libya to the island of Gavdos, south of Crete. The largest island in the Levantine Sea is Cyprus. The greatest depth of 4384 meters is found in the Pliny Trench, about 80 km south of Crete. The Levantine Sea stretches over an area of 320,000 km2.

The northern part of the Levantine Sea between Cyprus and Turkey is called Cilician Sea. Also in the north are the large bays Gulf of İskenderun (northeast) and Gulf of Antalya (northwest). 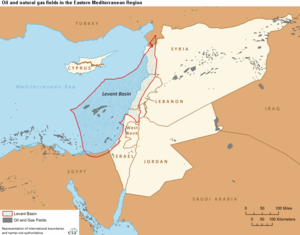 Boundaries of the Levant Basin, or Levantine Basin (US EIA)

The Leviathan gas field is located in this area under the Levantine basin.[1][2]

The Suez Canal was completed in 1869, linking the Levantine Sea to the Red Sea. The Red Sea is higher than the Eastern Mediterranean, so the canal serves as a tidal strait that pours Red Sea water into the Mediterranean. The Bitter Lakes, which are hypersaline natural lakes that form part of the canal, blocked the migration of Red Sea species into the Mediterranean for many decades, but as the salinity of the lakes gradually equalized with that of the Red Sea, the barrier to migration was removed, and plants and animals from the Red Sea have begun to colonize the eastern Mediterranean. This migration of species is known as the Lessepsian migration, after Ferdinand de Lesseps, the chief engineer of the canal.

Construction of the Aswan High Dam across the Nile River in the 1960s has reduced the flow of freshwater and silt into the Levantine Sea. This made the sea relatively saltier and nutrient-poor than previously, which led to the collapse of historically important sardine fisheries, and has given an additional advantage to Red Sea species, who are adapted to the saltier and nutrient-poor Red Sea.