From Infogalactic: the planetary knowledge core
(Redirected from Leveling)
Jump to: navigation, search
This article is about the surveying technique. For other uses, see Levelling (disambiguation).
"Spirit levelling" redirects here. For the bubble level, see Spirit level.
"Single-levelling" redirects here. For other uses, see Single-level (disambiguation). 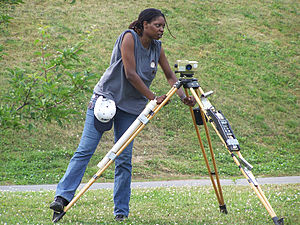 Center for Operational Oceanographic Products and Services staff member conducts tide station leveling in support of the US Army Corp of Engineers in Richmond, Maine.

Levelling (or leveling in US English) is a branch of surveying, the object of which is to

Spirit levelling employs a spirit level, an instrument consisting of a telescope with a crosshair and a tube level like that used by carpenters, rigidly connected. When the bubble in the tube level is centered the telescope's line of sight is supposed to be horizontal (i.e. perpendicular to the local vertical).

The spirit level is on a tripod with sight lines to the two points whose height difference is to be determined. A graduated leveling staff or rod is held vertical on each point; the rod may be graduated in centimetres and fractions or tenths and hundredths of a foot. The observer focuses in turn on each rod and reads the value. Subtracting the "back" and "forward" value provides the height difference.

If the instrument is placed equidistant from the two points to be measured, any small errors in its adjustment and the effects of earth curvature and refraction will tend to cancel out.

The rod is then held on an unknown point and a reading is taken in the same manner, allowing the elevation of the new (foresight) point to be computed. The procedure is repeated until the destination point is reached. It is usual practice to perform either a complete loop back to the starting point or else close the traverse on a second point whose elevation is already known. The closure check guards against blunders in the operation, and allows residual error to be distributed in the most likely manner among the stations.

Some instruments provide three crosshairs which allow stadia measurement of the foresight and backsight distances. These also allow use of the average of the three readings (3-wire leveling) as a check against blunders and for averaging out the error of interpolation between marks on the rod scale.

The curvature of the earth means that a line of sight that is horizontal at the instrument will be higher and higher above a spheroid at greater distances. The effect may be significant for some work at distances under 100 meters.

The line of sight is horizontal at the instrument, but is not a straight line because of refraction in the air. The change of air density with elevation causes the line of sight to bend toward the earth.

The combined correction for refraction and curvature is approximately:[3]

For precise work these effects need to be calculated and corrections applied. For most work it is sufficient to keep the foresight and backsight distances approximately equal so that the refraction and curvature effects cancel out. Refraction is generally the greatest source of error in leveling. For short level lines the effects of temperature and pressure are generally insignificant, but the effect of the temperature gradient dT / dh can lead to errors.[4]

around a loop. In the real gravity field of the Earth, this happens only approximately; on small loops typical of engineering projects, the loop closure is negligible, but on larger loops covering regions or continents it is not.

Instead of height differences, geopotential differences do close around loops:

stands for gravity at the leveling interval i. For precise leveling networks on a national scale, the latter formula should always be used.

should be used in all computations, producing geopotential values

for the benchmarks of the network.

The wye level is the oldest and bulkiest of the older style optical instruments. A low-powered telescope is placed in a pair of clamp mounts, and the instrument then leveled using a spirit level, which is mounted parallel to the main telescope.

The dumpy level was developed by English civil engineer William Gravatt, while surveying the route of a proposed railway line form London to Dover. More compact and hence both more robust and easier to transport, it is commonly believed that dumpy levelling is less accurate than other types of levelling, but such is not the case. Dumpy levelling requires shorter and therefore more numerous sights, but this fault is compensated by the practice of making foresights and backsights equal.

Precise level designs were often used for large leveling projects where utmost accuracy was required. They differ from other levels in having a very precise spirit level tube and a micrometer adjustment to raise or lower the line of sight so that the crosshair can be made to coincide with a line on the rod scale and no interpolation is required.

Automatic levels make use of a compensator that ensures that the line of sight remains horizontal once the operator has roughly leveled the instrument (to within maybe 0.05 degree). The surveyor sets the instrument up quickly and doesn't have to relevel it carefully each time he sights on a rod on another point. It also reduces the effect of minor settling of the tripod to the actual amount of motion instead of leveraging the tilt over the sight distance. Three level screws are used to level the instrument.

Setting up an automatic level

Set up the tripod at just above chest height. Make sure it is stable, and mount the level on the top. Adjust the leveling screws until the pond bubble is centralised. As long as the pond bubble is central, the automatic compensators are able to finely level the instrument. To ensure this is the case, whilst looking through the scope, gently tap the level. The view will waver for a few moments before steadying. If this does not happen, the instrument is not level enough for the compensators to cope, and needs adjustment.

The staff starts at zero, on the ground. Every 10 cm is a number, showing ( in meters to one decimal) the height of the bottom of what appears to be a stylised E (even numbers) or 3 (odd numbers), 5 cm high. The stems of the E or 3 and the gaps between them are each 10mm high. These 10mm increments continue up to the next 10 cm mark.

The person holding the staff should endeavour to hold it as straight as possible. The leveller can easily see if it is tilted to the left or right, and should correct the staff-holder. However, it cannot easily be seen that the staff is tilted towards or away from the leveller. In order to combat this possible source of error, the staff should be slowly rocked towards and away from the leveller. When viewing the staff, the reading will thus vary between a high and low point. The correct reading is the lowest value.

Digital levels electronically read a bar-coded scale on the staff. These instruments usually include data recording capability. The automation removes the requirement for the operator to read a scale and write down the value, and so reduces blunders. It may also compute and apply refraction and curvature corrections.

Laser levels [5] project a beam which is visible and/or detectable by a sensor on the leveling rod. This style is widely used in construction work but not for more precise control work. An advantage is that one person can perform the levelling independently, whereas other types require one person at the instrument and one holding the rod.

The sensor can be mounted on earth-moving machinery to allow automated grading.