From Infogalactic: the planetary knowledge core
Jump to: navigation, search
This article is about the simple machine. For other uses, see Lever (disambiguation).

A lever (/ˈliːvər/ or US /ˈlɛvər/) is a machine consisting of a beam or rigid rod pivoted at a fixed hinge, or fulcrum. A lever is a rigid body capable of rotating on a point on itself. It is one of the six simple machines identified by Renaissance scientists. The word entered English about 1300 from Old French, in which the word was levier. This sprang from the stem of the verb lever, meaning "to raise". The verb, in turn, goes back to the Latin levare, itself from the adjective levis, meaning "light" (as in "not heavy"). The word's ultimate origin is the Proto-Indo-European (PIE) stem legwh-, meaning "light", "easy" or "nimble", among other things. The PIE stem also gave rise to the English word "light".[1] A lever amplifies an input force to provide a greater output force, which is said to provide leverage. The ratio of the output force to the input force is the mechanical advantage of the lever.

The earliest remaining writings regarding levers date from the 3rd century BC and were provided by Archimedes. 'Give me a place to stand, and I shall move the Earth with it' is a remark of Archimedes who formally stated the correct mathematical principle of levers (quoted by Pappus of Alexandria). The distance required to do this might be exemplified in astronomical terms as the approximate distance to the Circinus galaxy (roughly 3.6 times the distance to the Andromeda Galaxy) - about 9 million light years.[citation needed]

It is assumed that in ancient Egypt, constructors used the lever to move and uplift obelisks weighing more than 100 tons.[by whom?] 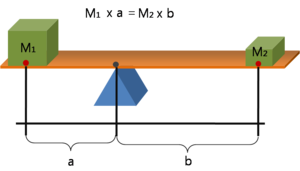 A lever in balance

A lever is a beam connected to ground by a hinge, or pivot, called a fulcrum. The ideal lever does not dissipate or store energy, which means there is no friction in the hinge or bending in the beam. In this case, the power into the lever equals the power out, and the ratio of output to input force is given by the ratio of the distances from the fulcrum to the points of application of these forces. This is known as the law of the lever.

The mechanical advantage of a lever can be determined by considering the balance of moments or torque, T, about the fulcrum,

where M1 is the input force to the lever and M2 is the output force. The distances a and b are the perpendicular distances between the forces and the fulcrum.

The mechanical advantage of the lever is the ratio of output force to input force,

This relationship shows that the mechanical advantage can be computed from ratio of the distances from the fulcrum to where the input and output forces are applied to the lever, assuming no losses due to friction, flexibility or wear. 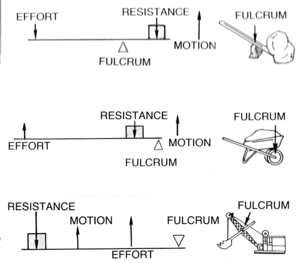 Law of the lever

The lever is a movable bar that pivots on a fulcrum attached to a fixed point. The lever operates by applying forces at different distances from the fulcrum, or a pivot.

Assuming the lever does not dissipate or store energy, the power into the lever must equal the power out of the lever. As the lever rotates around the fulcrum, points farther from this pivot move faster than points closer to the pivot. Therefore a force applied to a point farther from the pivot must be less than the force located at a point closer in, because power is the product of force and velocity.[3]

The use of velocity in the static analysis of a lever is an application of the principle of virtual work.

Virtual work and the law of the lever

A lever is modeled as a rigid bar connected to a ground frame by a hinged joint called a fulcrum. The lever is operated by applying an input force FA at a point A located by the coordinate vector rA on the bar. The lever then exerts an output force FB at the point B located by rB. The rotation of the lever about the fulcrum P is defined by the rotation angle θ in radians. 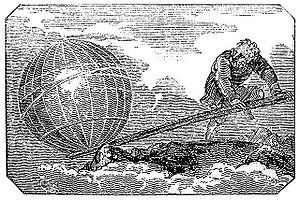 This is an engraving from Mechanics Magazine published in London in 1824.

Let the coordinate vector of the point P that defines the fulcrum be rP, and introduce the lengths

which are the distances from the fulcrum to the input point A and to the output point B, respectively.

Now introduce the unit vectors eA and eB from the fulcrum to the point A and B, so

The velocity of the points A and B are obtained as

where eA⊥ and eB⊥ are unit vectors perpendicular to eA and eB, respectively.

where FA and FB are components of the forces that are perpendicular to the radial segments PA and PB. The principle of virtual work states that at equilibrium the generalized force is zero, that is

Thus, the ratio of the output force FB to the input force FA is obtained as

which is the mechanical advantage of the lever.

This is the law of the lever, which was proven by Archimedes using geometric reasoning.[5]

Using a Rope as a Lever

You understand what a Lever is. But can you use a rope as a lever? You can if you are using it as shown in the figure. Arrange a strong column at a steep angle, apply a firm attachment from the rope to the column and the object to be lifted, and apply the force horizontally, and get a great multiplier of force. If one combines the mechanical advantage of pulleys in the horizontal force applier, you could get even greater lifting force. Picture the application in the figure, and in this case, you could get great lift upward then add planks of wood to support the load at height, reset, and lift again, and add more blocking, and lift, repeat. This technology has been lost in history, as the use of winches with low friction wheeled pulleys and reduction gearing powered by steam and then electricity (along with steel cable replacing rope) took over this primitive technology. 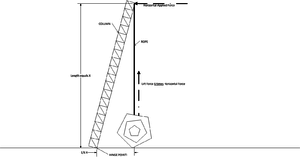 A sample diagram of using a rope to lift a heavy object with the mechanical advantage of geometry, i.e. a lever.