Levon Ter-Petrosyan (Armenian: Լևոն Տեր-Պետրոսյան; born 9 January 1945), also known by his initials LTP, is an Armenian politician. He was the first President of Armenia from 1991 to 1998. A senior researcher at the Matenadaran Institute of Ancient Manuscripts, he led the Karabakh movement for the unification of the Armenian-populated Nagorno-Karabakh with Armenia in 1988. After Armenia's independence from the Soviet Union in 1991, Ter-Petrosyan was elected president in October 1991 with overwhelming public support. He led the country through the Nagorno-Karabakh War with neighboring Azerbaijan, during which Armenia supported the Nagorno-Karabakh Republic in fighting against Azerbaijan.

He has been accused of rigging the 1996 election, causing thousands to go into the streets to protest the results. The protesters were led by official runner-up Vazgen Manukyan, Ter-Petrosyan's former colleague and his first Prime Minister and later the Defence Minister. The mass rallies were suppressed by military force. Due to disagreements with the key government members, especially Defence Minister Vazgen Sargsyan and Prime Minister Robert Kocharyan, Ter-Petrosyan resigned on 3 February 1998.[1]

From his resignation up to 2007, Ter-Petrosyan was inactive in the political scene, however, he made a political comeback in September 2007 and ran for presidency in 2008. He faced one of his former government members, at the time Prime Minister Serzh Sargsyan. According to official results, he earned only 21.5% of the total vote. Ter-Petrosyan claimed the elections were rigged and led thousands of his supporters into mass protests against the alleged electoral fraud and called for new elections. After a week of mass protests, the government used police and apparently military force to disperse his supporters, resulting in the death of ten people on 1 March 2008.

On 1 August 2008, Ter-Petrosyan founded the Armenian National Congress which included more than a dozen of political parties and NGOs. Being the main opposition party in Armenia, the ANC was out of the parliament and was mainly involved in street struggle against Serzh Sargsyan's government. They organized mass rallies in the wake of the Arab Spring, forcing the government to grant several political concessions. In the 2012 National Assembly election, the ANC received 7.1% of the popular vote.

Ter-Petrosyan was born in Aleppo, Syria to a family which survived the Armenian Genocide and took part in the Musa Dagh Resistance. His family emigrated to Soviet Armenia in 1946. In 1968, he graduated from the Oriental Studies Department of the Yerevan State University. In 1972, he completed his postgraduate studies at the Leningrad State University. In 1987, he received his doctoral degree from the same university. In 1972-78, Ter-Petrosyan worked as junior researcher at the Literature Institute of Armenia named after Manouk Abeghian. From 1978-85, he held the post of science secretary at Matenadaran named after Saint Mesrob Mashdots. Since 1985, he has worked at Matenadaran as a senior researcher.[citation needed]

He is married to Lyudmila (née Pleskovskaya); the couple has one son, David, and three grandchildren.[citation needed]

Karabakh movement and independence of Armenia

The Karabakh Committee was established on May 19, 1988. Levon Ter-Petrosyan soon became its de facto leader.[3] From 10 December 1988 to 31 May 1989, he was under arrest in Matrosskaya Tishina together with other members of the Karabakh Committee. In 1989, Ter-Petrosyan was elected Member of the Board of the Pan-Armenian National Movement. Later on, he became the Chairman of the Board. On 27 August 1989, he was elected as deputy of the Supreme Soviet of the Armenian SSR. He was re-elected as deputy on 20 May 1990. On 4 August of the same year, he became Chairman of the Supreme Council of the Republic of Armenia.[4] 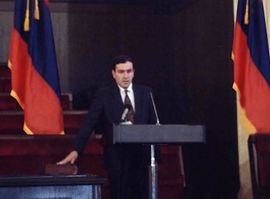 Inauguration of Ter-Petrosyan as president in 1991.

Ter-Petrosyan was popularly elected the first President of the newly independent Republic of Armenia on 16 October 1991 and re-elected on 22 September 1996.

His re-election was marred by allegations of electoral fraud reported by the opposition and supported by many international observers. His popularity waned further as the opposition started blaming him for the economic quagmire that Armenia's post-Soviet economy was in. He was also unpopular with one party in particular, the Armenian Revolutionary Federation, which he banned and whose leadership was jailed, on the grounds that the party had a foreign-based leadership —something prohibited under Armenia's constitution.[citation needed]

He was forced to step down in February 1998 after advocating compromised settlement of the conflict over Nagorno-Karabakh which many Armenians regarded as undermining their security. Ter-Petrosyan's key ministers, led by then-Prime Minister Robert Kocharyan, refused to accept a peace plan for Karabakh put forward by international mediators in September 1997. The plan, accepted by Ter-Petrosyan and Azerbaijan, called for a "phased" settlement of the conflict which would postpone an agreement on Karabakh's status, the main stumbling block. That agreement was to accompany the return of most Armenian-controlled Azerbaijani territories around Karabakh and the lifting of the Azerbaijani and Turkish blockades of Armenia.[citation needed]

Since his resignation, Ter-Petrosyan rarely appeared in public and avoided contact with the media, although there were speculations that he would run for the office of president of Armenia in the general election in February 2003. He instead devoted his time to scientific research. In 2005-07, he published two volumes of his "The Crusaders and Armenians" historico-political research.[citation needed]

On 21 September 2007, Ter-Petrosyan made his first public speech in nearly ten years at an event in Yerevan marking the 16th anniversary of Armenia's declaration of independence. In this speech he was strongly critical of Kocharyan. Subsequently, Ter-Petrosyan officially announced his candidacy in the 2008 presidential election in a speech in Yerevan on 26 October 2007. He accused Kocharyan's government of massive corruption, involving the theft of "at least three to four billion dollars" over the previous five years. He was critical of the government's claims of strong economic growth and argued that Kocharyan and his Prime Minister, Serge Sargsyan, had come to accept a solution to the problem of Nagorno-Karabakh that was effectively the same solution that he had proposed ten years earlier. A number of opposition parties have rallied behind him since his return to the political arena, including the People's Party of Armenia led by Stepan Demirchian, Armenian Republic Party led by Aram Sargsyan,[5] Social Democrat Hunchakian Party, "Azadakrum" movement for Jirair Sefilian, "New Times" Party and the Heritage Party, led by Raffi Hovannisian.[6] 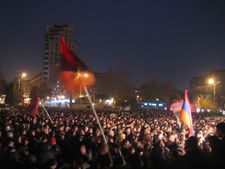 225px
Mass protests at Freedom Square (left) and near the French embassy (right).

Final results from the election, which was held on 19 February 2008, officially showed Ter-Petrosyan in second place with 21.5% of the vote. Then he and his supporters accused the government of rigging the election and claimed victory;[7] beginning on February 20, he led continuous protests involving tens of thousands of his supporters in Yerevan.[8]

In the early morning hours of 1 March, reportedly acting on evidence of firearms in the camp, the authorities moved in to inspect the tents set up by demonstrators. Law enforcement agents then violently dispersed the hundreds of protestors camped in. Ter-Petrosyan was placed under de facto house arrest, not being allowed to leave his home, though the authorities later denied the allegations.[9] A few hours later, tens of thousands of protestors or more gathered at Myasnikyan Square to protest the government's act. Police, overwhelmed by the sheer size of the crowd, pulled out. A state of emergency was implemented by President Kocharyan at 17:00, allowing the army to be moved into the capital. At night, a few thousand protestors barricaded themselves using commandeered municipal buses. As a result of skirmishes with the police, ten people died.[10]

In 2011, Ter-Petrosyan again took a leading role in protests that erupted in Armenia as part of a wave of regional unrest.[11] As leader of the Armenian National Congress opposition bloc, formed two years prior to the outbreak of protests, Ter-Petrosyan accused President Serzh Sargsyan, elected in the disputed 2008 election, of being "illegitimate" and called for the release of political prisoners, the resignation of the government, and a full inquiry into the violence that claimed the lives of ten of his supporters in 2008.[12][13]

The ANC held its convention on 22 December 2012. Ter-Petrosyan talked about groups promoting pro-Western and pro-Russian divisions within the Armenian society and the political parties calling them "dangerous forces". Ter-Petrosyan did not announce whether he will run for president in February 2013.[15] Few days after the convention on 25 December 2012, Ter-Petrosyan gave Chorrord Inknishkhanutyun an interview eventually declaring his decision not to run for the office. He claimed that "dozens of arguments are being put forward by those advocating and opposing my nomination, but the most important argument has been avoided. Can anyone who has respect for his people vie for a presidential post at the age of 68? Such things usually do not happen in developed democratic countries ... everything is concentrated in the hands of a bunch of criminals who have usurped power."[16]

The official ANC statement on 27 December 2012 said that they are not participating in the upcoming presidential election in any form. The ANC claimed that the participation in the election is "legitimization of the illegal regime."[17] Rumors about Ter-Petrosyan's possible retirement from active politics spread soon after his December 25 announcement. Armenians newspapers argued that Levon Zurabyan, the ANC speaker, could become his successor.[18]

On 7 February 2013, Ter-Petrosyan gave another interview to the Chorrord Inknishkhanutyun daily newspaper. He acknowledged that the ANC cannot continue its activities with the same structure. He admitted that the alliance had "internal fermentations"[19] and called "various political forces and non-partisan individuals of the Congress to merge into one single political party."[20]

The presidential election was held on 18 February 2013. Voting in a polling station in central Yerevan, Ter-Petrosyan said the journalists he voted for the "sake of the Republic of Armenia."[21] According to the official results, incumbent Serzh Sargsyan won with over 58% of the vote. Raffi Hovannisian, the main opposition candidate who earned 37% of the total, claimed victory and started mass protests the next day. On 23 February 2013, Ter-Petrosyan addressed the gathered at the Pan-Armenian National Movement party convention. He claimed Hovannisian won the election and accused incumbent Sargsyan in rigging the election. Talking about Hovannisian's post-election protests, Ter-Petrosyan stated "I see words, I see speeches, but there is no action, no plan of actions."[22]

On 13 April 2013, the Armenian National Congress was officially transformed from an alliance of 18 original parties into a single party, on the base of the Pan-Armenian National Movement. During his speech at the founding convention, Ter-Petrosyan blamed Hovannisian for having no political agenda in his protests. In particular, Ter-Petrosyan said "during the current post-election period we have seen everything but political processes."[23]

The ANC, now a party rather than an alliance, went to the 2013 Yerevan City Council election alone. Their list was headed by Yerevan's former mayor Vahagn Khachatryan.[24] ANC failed to pass the 6% threshold.