Lewis Frederick Ayres III (December 28, 1908 – December 30, 1996), known professionally as Lew Ayres, was an American actor whose film and television career spanned 65 years. He is best known for starring as German soldier Paul Bäumer in the film classic All Quiet on the Western Front (1930) and for playing Dr. Kildare in nine movies.[2] 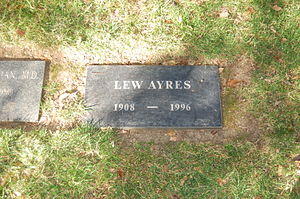 Ayres was born in Minneapolis, Minnesota[3] to Irma and Louis Ayres, who divorced when he was four. Louis, an amateur musician and court reporter, remarried soon after. As a teen, Lew and his mother moved with his step-father and half brother and sister to San Diego, California.[4]

Career as a musician

Leaving high school before graduating, he started a small band which traveled to Mexico. He returned months later to pursue an acting career, but continued working full-time as a musician. He played banjo and guitar for big bands, including the Henry Halstead Orchestra. He recorded one of the earliest Vitaphone movie shorts called Carnival Night in Paris (Warner Brothers, 1927). Ayres wrote, "I was a member of Henry Halstead's orchestra in 1927 at the Mission Beach Ballroom in San Diego, California for the summer. My instruments were tenor banjo, long-neck banjo and guitar. After a hiatus, I rejoined Mr. Halstead with a new group, including Phil Harris, on New Year's Eve the same year for the opening night of the Beverly Wilshire Hotel, a memorable occasion." He left a national tour to pursue a career as an actor full-time.

Ayres was discovered at a night club by talent agent Ivan Kahn. In 1929 he was cast to play opposite Greta Garbo in 1929's The Kiss, but it was his leading role in the 1930 version of All Quiet on the Western Front which made him a star, secured him a contract with Universal—and made him a conscientious objector to World War II. (See below.) He made a number of mostly forgotten B movies for Universal, with the exception of Iron Man (with Jean Harlow). His most successful movies at this time were those he made on loan to other studios, including Doorway to Hell (with James Cagney in a supporting role), and as Janet Gaynor's leading man in both State Fair and Servants' Entrance, which featured a combination of live action and Walt Disney animation in a musical dream sequence, both for Fox Films.

He left Universal to sign with Fox Films, before moving to poverty row studio Republic Pictures to pursue a second career as a director, including the film Hearts in Bondage in 1936, starring James Dunn and Mae Clarke. He moved to Paramount Pictures before finally being signed to MGM in 1938.

In 1938, he was loaned from Paramount to play the role of Ned in Holiday. The role earned him considerable critical attention, including interest from MGM to put him under contract specifically for the role of Dr. James Kildare in an upcoming film series. Ayres played the role in nine films from 1938 to 1942 (and again in a 1950s radio series) while also appearing in light comedies for MGM, including Spring Madness, Ice Follies of 1938, Rich Man, Poor Girl, and Fingers At the Window. 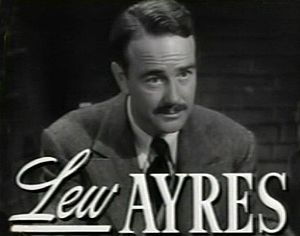 His final film as Dr. Kildare, Born to Be Bad, was re-edited after he was drafted and controversially declared himself a conscientious objector in March 1942. This stance almost destroyed Ayres's reputation until it was revealed that he had served honorably as a non-combatant medic from 1942 to 1946. He returned to acting in the films Dark Mirror (with Olivia De Havilland) and The Unfaithful with Ann Sheridan. In 1948, his role in Johnny Belinda earned him an Academy Award nomination for Best Actor. The film was nominated for 13 Oscars, but only won Best Actress for Jane Wyman. Ayres lost that year to Laurence Olivier's portrayal of the title role in Hamlet, which also won Best Picture.

Ayres gradually moved to television, appearing in several anthology series in guest roles. In the summer of 1958, he hosted eleven original episodes of a CBS Western anthology television series called Frontier Justice, a production of Dick Powell's Four Star Television. He was offered the part of Dr. Kildare in an NBC series. But his prescient request that the show have no cigarette advertising led to the offer being withdrawn, and the part going, in 1961, to Richard Chamberlain. In 1962 he appeared as the Vice-President in Advise and Consent, and in The Carpetbaggers in 1964, but he was by then primarily a television actor, with only occasional film work every few years. In 1975, he was nominated for an Emmy as best guest actor on Kung Fu, for the episode "The Vanishing Image." 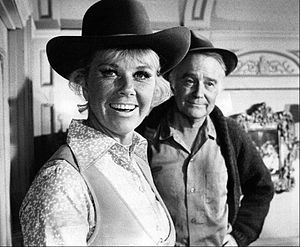 His 1976 documentary film Altars of the World (based on a series of documentaries he made in 1956 titled Altars of the East) brought his Eastern philosophical beliefs to the screen and earned him critical acclaim and a Golden Globe Award for best documentary in 1977.[5] In 1985, he was cast in his first series as a regular cast member, as the father of Robert Wagner in the short-lived series Lime Street. His last role was in the made-for-TV film Hart to Hart: Crimes of the Heart, also starring Wagner, in 1994.

In March 1942, Ayres was identified as a 4E conscientious objector and sent to a CO camp. As expected, the announcement that a Hollywood actor objected to the war was a major source of public outcry and debate.[5] Within a month it was determined that he had initially requested to be A-O-1, so that he could serve as a non-combat medic. However, the military's policy that servicemen cannot request, or be guaranteed, where they will serve, forced him to request a 4E status. The U.S. military confirmed that they would place him as a medic and in April 1942, his status was changed.

He served as a First Aid instructor in the United States Army before requesting a drop in rank in order to serve as a medic and chaplain's assistant in the Pacific. He was one of 16 medics who arrived during the invasion of Leyte to set up evacuation hospitals under fire, and there he provided care to soldiers and civilians in the Philippines and New Guinea. He donated all the money he had earned as a serviceman to the American Red Cross.[6] Serving for three and a half years in the Medical Corps, he was awarded three battle stars. After the war, he resumed his career and made scores of movies, but never reached the peak of his early Hollywood stardom.[7]

Ayres was married three times. He was married to actress Lola Lane from 1931 to 1933, and to actress Ginger Rogers, whom he met while starring in the film Don't Bet on Love, from 1934 to 1940. He was separated from both women considerably earlier than their legal divorces. His third marriage, to Diana Hall, lasted from 1964 until his death in 1996. They had one son, Justin, born in 1968. He had a brief affair with actress Jane Wyman, who supposedly ended her marriage to Ronald Reagan to pursue a relationship with Ayres in 1948.[8]

Lew Ayres died December 30, 1996, just two days after his 88th birthday.[9] He was survived by his wife of 32 years, actress Diana Hall, and their son Justin Ayres. He was buried under a simple headstone at Westwood Memorial Park in Los Angeles, California next to the unmarked grave of musician Frank Zappa.