From Infogalactic: the planetary knowledge core
Jump to: navigation, search
For other uses, see Lida (disambiguation).

The name Lida is derived from the name of the river Lidzeya. Its origin is associated with the Lithuanian appellative Lyda - Lydimas, meaning to fuse, to cast (denoting forest clearing).[2] Names in other languages are spelled as Polish: Lida and Yiddish: לידע‎.

There are passing mentions of Lida in chronicles from 1180. Until the early 14th century the settlement at Lida was a wooden fortress in the Lithuania proper. In 1323, the Grand Duke of Lithuania Gediminas built a brick fortress there. 1380 is generally considered the founding year of the city of Lida. The fortress withstood Crusader attacks from Prussia in 1392 and 1394 but it was burned to the ground in 1710. Following the death of Gediminas, when Lithuania was divided into principalities, Lida became the capital of one of them, the seat of Algirdas.

Lida was in the Grand Duchy of Lithuania. In the second half of the 14th century, after the Christianization of Lithuania the Catholic parish was established in former pagan lands and a Church was built by Jogaila (ruins are still preserved). Subsequently in the 15th-century town the became a centre of production by craftsmen and trade. Lida was connected with Vilnius, Navahrudak and Minsk. At that time the town had a market square and four streets: Wielenska, Zamkowa, Kamieńska and Krivaya.[citation needed] In 1588, Lida became the seat of Lida District in Vilnius Voivodeship. Magdeburg Rights were granted to the town in 1590 and confirmed in 1776 by the Polish Sejm. By these rights Lida held two annual fairs of little import to the local economy. The population was between 2,000 to 5,000 people. It was part of the Russian Empire after the third partition of the Polish–Lithuanian Commonwealth in 1795.

Jews first settled in Lida in the middle of the 16th century, and permission to construct a synagogue was granted by King Stefan Batory in 1579. The temple was decimated and rebuilt with the permission of King Wladyslaw Vasa in 1630. By 1817, the Jewish Community of Lida numbered 567, nearly three-quarters of the total population of the city at the time. Lida had a particularly sightly brick synagogue. Old photographs can be found.[3][4]

During the First World War, the Germans captured Lida, and both Jews and non-Jews were forced into labor. Soon after the German Occupation ceased in the winter of 1918, the Bolsheviks entered the city and created a strong sense of the Revolution. In 1919, Polish soldiers entered Lida and a pogrom occurred, in which 39 Jews were slaughtered. After the Riga Treaty it was passed to Poland and became powiat (county) centre in Nowogródek Voivodeship. Between the wars was a short period of economic growth for the Jewish community. All aspects of the community flourished, and at the time there were 12 fully functioning synagogues. In 1931, the Jewish population grew to 6,335, and at the dawn of the Holocaust refugees added to make it nearly 8,500. In the fall of 1939, the Red Army moved in and annexed Lida to the Baranavichy Voblast of Byelorussian SSR, part of the Soviet Union. Once again, the Jews were oppressed and all cultural aspects of the community were diminished and the Soviets imprisoned surrounding Jews in Lida. In June 1941, the Germans severely damaged the city, and by December of that year, a ghetto was created on the suburbs of Lida, in which several families ended up crowding into a single home. On May 7, 1942 the ghetto was sealed and on the 8th nearly 6,000 were taken to a military firing range, where they were shot and piled in ready-made grave pits. About 1,500 educated Jews remained in the ghetto, and the population was added to by incoming refugees. A few groups secretly escaped the city and hid in the forests until the city was liberated in 1944, but the rest of the community was murdered on September 18, 1943. It was passed to newly created Grodno Voblast in 1944. 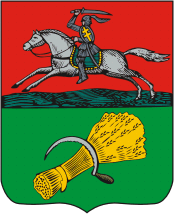 COA of Lida in Vilna Governorate

The 17th century was a difficult time in Lida. Caught by invading to Polish-Lithuanian Commonwealth forces of Russia and Sweden. A depression resulted, and people moved out of Lida. By 1786, 514 inhabitants were left in Lida. in 1795, Lida was annexed by the Russian Empire as a powiat centre of the Slonim Governorate (1795). Afterwards, Lida was a part of the Lithuania Governorate in 1797 and of Grodno Governorate since 1801.

A two-year school opened. Then, a parish school with the department for girls opened as did a Jewish school. In 1899 a hospital opened which consisted of 25 beds. In 1901 cast-iron plant began to operate. In 1903 sawmill started its operation. At the end of 19th century and at the beginning of 20th century two brick plants were built. In 1904, there were 1000 houses of which 275 were brick, fourteen small enterprises, four hospitals with beds for 115 people, and six elementary schools for 700 pupils. In 1904, near Minsk the Russian Social Democratic Party was formed. During the revolutions of 1905-07, the uprisings of the workers took place, complete with political slogans. In 1914, there were almost 40 factories.

During World War I Lida was occupied by the German troops. In 1919 the Red Army established Soviet power.

Polish troops under General Józef Adam Lasocki reached the outskirts of Lida in early March 1919. On April 15 they resumed their advance and on April 17 they captured Lida, as a screening operation to the taking of Vilnius.

On July 17, 1920 the Red Army returned but was forced to retreat in August following the Soviet defeat at Warsaw.

On September 30, 1920 Poland and Soviet troops fought in and near Lida during the battle of Niemen, as the Soviet 21st Rifle Division tried to assault Polish positions but was repulsed by the 1st Lithuanian-Belarusian Division; Poles took about 10,000 prisoners from the Soviet 3rd Army.[5]

After the 1920 Moscow Treaty it was ceded by the Soviets to Lithuania, this treaty however was not recognized by Poland. In accordance with Riga Peace Treaty of 1921, the town was awarded to Poland as the powiat centre in Nowogródek Voivodeship.

In 1927, there were twenty-four factories in Lida. 1928 were years of rapid growth in the production. A new rubber good's factory started up, employing almost 800 people. Also, Lida was an important garrison of the Polish Army, with one infantry division and the 5th Corps of the Polish Air Force stationed there.

From June 1941 to July 1944, it was occupied by the German troops who killed almost 25,149 people. On September 18, 1943, the Jewish Community of Lida was rounded up and taken to Majdanek, where they were murdered. A small number of about 200 Lida Jews survived the Holocaust. Beginning of September 1944, Lida was in Grodno Region.

During the Cold War and up until 1993 Lida was home to the 1st Guards Bomber Aviation Division of the Soviet Air Force. 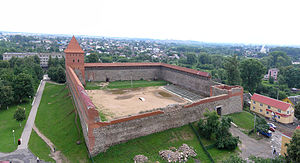 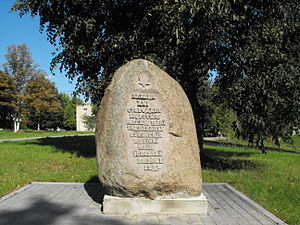 Lida is twinned with: