Army, Air Force, and Marine Corps three-star insignia of the rank of Lieutenant General. Style and method of wear may vary between the services.
This article is about a United States military rank. For other countries that use a similar rank, see lieutenant general. 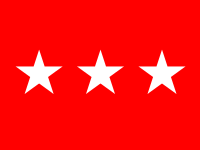 Rank flag of a lieutenant general in the Army (the Air Force uses the same design with blue, vice red, field

The United States Code explicitly limits the total number of generals that may be concurrently active to 230 for the Army, 208 for the Air Force, and 60 for the Marine Corps.[1] For the Army and Air Force, no more than about 25% of the service's active duty general officers may have more than two stars.[2] Some of these slots are reserved by statute. For example, in the Army and the Air Force, the Surgeon General[3] and the Judge Advocate General[4][5] for both branches are lieutenant generals. Officers serving in certain intelligence positions are not counted against either limit, including the Deputy Director of the Central Intelligence Agency.[6] The President may also add three-star slots to one service if they are offset by removing an equivalent number from other services.[2] Finally, all statutory limits may be waived at the president's discretion during time of war or national emergency.[7]

The Superintendent of the United States Military Academy is almost always a U.S. Army lieutenant general; either upon appointment or shortly thereafter.

The three-star grade goes hand-in-hand with the position of office to which it is linked, so the rank is temporary. Officers may only achieve three-star grade if they are appointed to positions that require the officer to hold such a rank.[8] Their rank expires with the expiration of their term of office, which is usually set by statute.[8] Lieutenant generals are nominated for appointment by the president from any eligible officers holding the rank of brigadier general or above, who also meet the requirements for the position, with the advice of the Secretary of Defense and the Chairman of the Joint Chiefs of Staff.[8] The nominee must be confirmed via majority vote by the Senate before the appointee can take office and thus assume the rank.[8] The standard tour length for most lieutenant general positions is three years but some are set four or more years by statute.

Extensions of the standard tour length can be approved, within statutory limits, by their respective service secretaries, the Secretary of Defense, the president, or Congress but these are rare, as they block other officers from being promoted. Some statutory limits under the U.S. Code can be waived in times of national emergency or war. Three-star ranks may also be given by act of Congress but this is extremely rare.

Other than voluntary retirement, statute sets a number of mandates for retirement. Lieutenant generals must retire after 38 years of service unless appointed for promotion or reappointed to grade to serve longer.[9] Otherwise all general officers must retire the month after their 64th birthday.[10] However, the Secretary of Defense can defer a three-star officer's retirement until the officer's 66th birthday and the president can defer it until the officer's 68th birthday.

General officers typically retire well in advance of the statutory age and service limits, so as not to impede the upward career mobility of their juniors. Since there is a finite number of three-star slots available to each service, typically one officer must leave office before another can be promoted.[11] Maintaining a three-star rank is a game of musical chairs; once an officer vacates a position bearing that rank, they have 60 days to be appointed or reappointed to a position of equal or higher importance or involuntarily retire.[8] Historically, officers leaving three-star positions were allowed to revert to their permanent two-star ranks to mark time in lesser jobs until statutory retirement, but now such officers are expected to retire immediately to avoid obstructing the promotion flow.

After the close of the Second World War, generals were normally promoted permanently to brigadier general and major general, with temporary promotions to lieutenant general and general to fill senior positions as needed. In theory, a general vacates their three or four-star rank at termination of their assignment unless placed in an equal ranking billet. Douglas MacArthur, who served as four-star general and Army Chief of Staff, reverted to two stars after his CoS tour ended but chose to stay on active duty in the United States Army.

The practice of using lieutenant general and general grades as a temporary rank continues, with the President and the Department of Defense creating temporary or indefinite three- and four-star assignments, with fixed term of office, with the approval of the Senate. Even with the temporary status, such officers are also almost always granted permanent retirement in the last grade they held with the satisfactory completion of at least two or three years in grade.

Listed in order of receiving the rank: