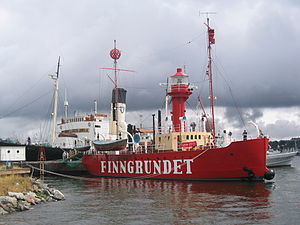 Lightship Finngrundet, now a museum ship in Stockholm. The day markers can be seen on the masts. 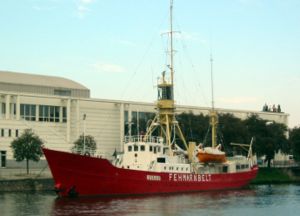 A lightvessel, or lightship, is a ship which acts as a lighthouse. They are used in waters that are too deep or otherwise unsuitable for lighthouse construction.[1] Although there is some record of fire beacons placed on ships in Roman times, the first modern lightvessel was off the Nore sandbank at the mouth of the River Thames in England, placed there by its inventor Robert Hamblin in 1732. The type has become largely obsolete; some stations were replaced by lighthouses as the construction techniques for the latter advanced, while others were replaced by large automated buoys.[1]

A crucial element of lightvessel design is the mounting of a light on a sufficiently tall mast. Initially this consisted of oil lamps which could be run up the mast and lowered for servicing. Later vessels carried fixed lamps, which were serviced in place. Fresnel lenses were used as they became available, and many vessels housed these in small versions of the lanterns used on lighthouses. Some lightships had two masts, the second holding a reserve beacon in case the main light failed.

Initially the hulls were constructed of wood, with lines like those of any other small merchant ship. This proved to be unsatisfactory for a ship that was permanently anchored, and the shape of the hull evolved to reduce rolling and pounding. As iron and steel were used in other ships, so were they used in lightvessels, and the advent of steam and diesel power led to self-propelled and electrically lighted designs. Earlier vessels had to be towed to and from station.

Much of the rest of the ship was taken up by storage (for oil and the like) and crew accommodations. The primary duty of the crew was, of course, to maintain the light; but they also kept record of passing ships, observed the weather, and on occasion performed rescues.

In the early 20th century, some lightships were fitted with warning bells, either mounted on the structure or lowered into the water, the purpose of which was to warn of danger in poor visibility and to permit crude estimation of the lightship relative to the approaching vessel. Tests conducted by Trinity House found that sound from a bell submerged some 18 feet (5.5 m) could be heard at a distance of 15 miles (24 km), with a practical range in operational conditions of 1–3 miles.[2][3]

File:LV101 with Mushroom anchor.jpg
Lightship Portsmouth (LV-101) shows its mushroom anchor. It can be seen at downtown Portsmouth, Virginia, and is a part of the Naval Shipyard Museum.

Holding the vessel in position was an important aspect of lightvessel engineering. Early lightships used fluke anchors, which are still in use on many contemporary vessels. These were not very satisfactory, since a lightship has to remain stationary in very rough seas which other vessels can avoid, and these anchors are prone to dragging.

Since the early 19th century, lightships have used mushroom anchors, named for their shape, which typically weigh 3-4 tons. They were invented by Robert Stevenson. The first lightvessel equipped with one was an 82-ton converted fishing boat, renamed Pharos, which entered service on 15 September 1807 near to Bell Rock and had a 1.5 ton anchor.[4] The effectiveness of these anchors improved dramatically in the 1820s, when cast iron anchor chains were introduced (the rule of thumb being 6 feet of chain for every foot depth of water).

As well as the light, which operated in the fog and also at night, from one hour before sunset to one hour after sunrise, early lightvessels were equipped with red (or very occasionally white) day markers at the tops of masts, which were the first things seen from an approaching ship. The designs varied: filled circles or globes, and pairs of inverted cones being the most common among them.

Later lightships, for purposes of visibility, normally had bright red hulls which displayed the name of the station in white upper case letters; relief light vessels displayed the word RELIEF instead. A few ships had differently coloured hulls. For example, the Huron Lightship was painted black since she was assigned the black buoy side of the entrance to the Lake Huron Cut. The lightvessel that operated at Minots Ledge, Cohasset, Mass. from 1854 until 1860 had a light yellow hull to make it visible against the blue-green seas and the green hills behind it.

In England and Wales, Trinity House is in charge of all lightvessels. There are currently 8 unmanned lightvessels and 2 smaller light floats.[5]

The British were the first to deploy unmanned lightships, called crewless lightships in the early 1930s, which could operate for six months to one year.[6][dubious – discuss]

The first lightvessel conversion to solar power was made in 1995, and all vessels except the '20 class' have now been converted. The '20 class' is a slightly larger type of vessel that derives its power from diesel electric generators. Where a main light with a visible range in excess of 20 nautical miles (37 km) is required, a '20 class' vessel is used, as the main light from a Trinity House solar lightvessel has a maximum range of 19 nautical miles (35 km).

The first United States lightship was established at Chesapeake Bay in 1820, and the total number around the coast peaked in 1909 with 56 locations marked. Of those ships, 168 were constructed by the United States Lighthouse Service and six by the United States Coast Guard, which absorbed it in 1939. From 1820 until 1983, there were 179 lightships built for the U.S. government, and they were assigned to 116 separate light stations on four coasts (including the Great Lakes).[7]

The first United States lightships were small wooden vessels with no propelling power. The first United States iron-hulled lightship was stationed at Merrill's Shell Bank, Louisiana, in 1847. Wood was still the preferred building material at the time because of lower cost and ability to withstand shock loading. Wooden lightships often survived more than 50 years in northern waters where the danger of rotting was reduced. Lightvessel 16 guarded Sandy Hook and Ambrose stations for more than 80 years. Lightvessel 16 had both an inner hull and an outer hull with the space between filled with salt to harden the wood and reduce decay. Several lightships built with composite wood and steel hulls in 1897 proved less durable than either wood or steel. The first modern steel lightship in United States service was lightvessel 44 built in 1882. One of the last United States wooden hulled lightships built, lightvessel 74, went into service at Portland, Maine, in 1902. The first United States lightships with steam engine propulsion were built in 1891 for service on the Great Lakes where seasonal ice required prompt evacuation of light stations to avoid destruction of the lightships.[8]

File:Light ship tower.jpg
Some lightships, like this one in Amsterdam, were also equipped with a foghorn for audible signals at foggy times.

The official use of lightships in the United States ended March 29, 1985, when the United States Coast Guard decommissioned its last such ship, the Nantucket I. Many lightships were replaced with Texas Towers or large navigational buoys - both of which are cheaper to operate than lightvessels. In fact, lighthouses often replaced lightships.[9]

The naming and numbering of American lightships is often confusing. Up to and through the Civil War lightships were identified by name, usually that of the station where they served. As they were moved from station to station, however, the keeping of records became hopelessly tangled. Therefore, in 1867 all existing lightships were given numbers by which they would be permanently identified, and the station at which they were presently serving was painted on their sides, to be changed as needed. Lightships held in reserve to serve in place of those in dock for maintenance were labeled "RELIEF".[10] Surviving lightships are commonly taken to be named according to these labels, but for instance the "Lightship Chesapeake" actually served at two other stations as well as being used for examinations, and last served at the Delaware Light Station. In another case, the LV-114 was labeled "NEW BEDFORD", though there has never been such a station.[11] In an attempt to sort out the early lightships, they were assigned one or two letter designations sometime around 1930; these identifications do not appear in early records, and they are to some degree uncertain.[10]

There are three different and overlapping series of hull numbers. The Lighthouse Service assigned numbers beginning with "LV-" and starting from 1; however, not all numbers were used. When the Coast Guard took over the lighthouse service, all existing lightships were renumbered with "WAL-" prefixes, beginning with "WAL-501". In 1965 they were renumbered again, this time with "WLV-"; however in this case the numbers given were not sequential. Given that only six vessels were constructed after the Coast Guard takeover, the "LV-" series numbers are most commonly used.

See also List of lightships of the United States. 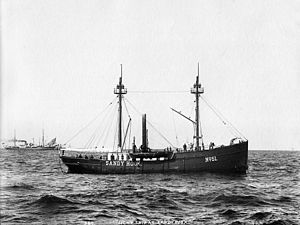 It is estimated that there are 15 United States lightships left today. Among them:

The duty that lightvessels serve places them in harm's way. Many lightships have been lost in hurricanes.[16]