From Infogalactic: the planetary knowledge core
(Redirected from Lime (mineral))
Jump to: navigation, search
For other uses, see Lime (disambiguation). 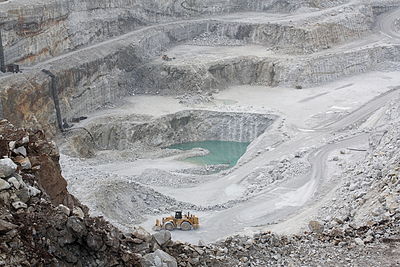 Lime is a calcium-containing inorganic material in which carbonates, oxides and hydroxides predominate. Strictly speaking, lime is calcium oxide or calcium hydroxide. It is also the name of the natural mineral (native lime) CaO which occurs as a product of coal seam fires and in altered limestone xenoliths in volcanic ejecta.[1] The word "lime" originates with its earliest use as building mortar and has the sense of "sticking or adhering."[2]

These materials are still used in large quantities as building and engineering materials (including limestone products, concrete and mortar) and as chemical feedstocks, and sugar refining, among other uses. Lime industries and the use of many of the resulting products date from prehistoric periods in both the Old World and the New World. Lime is used extensively for waste water treatment with ferrous sulfate.

The rocks and minerals from which these materials are derived, typically limestone or chalk, are composed primarily of calcium carbonate. They may be cut, crushed or pulverized and chemically altered. "Burning" (calcination) converts them into the highly caustic material quicklime (calcium oxide, CaO) and, through subsequent addition of water, into the less caustic (but still strongly alkaline) slaked lime or hydrated lime (calcium hydroxide, Ca(OH)2), the process of which is called slaking of lime.

When the term is encountered in an agricultural context, it probably refers to agricultural lime. Otherwise it most commonly means slaked lime, as the more dangerous form is usually described more specifically as quicklime or burnt lime.

Limestone in the lime industry is a general term for rocks that contain eighty percent or more of calcium or magnesium carbonates including marble, chalk, oolite, and marl. Further classification is by composition as high calcium, argillaceous (clayey), silicious, conglomerate, magnesian and other limestones, and dolomite[3] Uncommon sources of lime are coral, sea shells, calcite, and ankerite. Limestone is extracted from quarries or mines. Part of the extracted stone, selected according to its chemical composition and granulometry, is calcinated at about 1,000 °C (1,830 °F) in different types of lime kilns to produce quicklime according to the reaction: CaCO3 + heat → CaO + CO2.

Before use, quicklime is hydrated, that is combined with water, called slaking so hydrated lime is also known as slaked lime, and is produced according to the reaction: CaO + H2O → Ca(OH)2. Dry slaking is when quicklime is slaked with just enough water to hydrate the quicklime but remain as a powder and is referred to as hydrated lime. In wet slaking enough water, but not too much, is added to hydrate the quicklime and form a putty referred to as lime putty.

Because lime has an adhesive property with bricks and stones, it is often used as binding material in masonry works. It is also used in whitewashing as wall coat to adhere the white wash onto the wall.

The process by which lime (calcium carbonate) is converted to quicklime by heating, then to slaked lime by hydration, and naturally reverts to calcium carbonate by carbonation is known as the Lime Cycle.[4] The conditions and compounds present during each step of the lime cycle have a strong influence of the end product,[5] thus the complex and varied physical nature of lime products.

An example is when slaked lime (calcium hydroxide) is mixed into a thick slurry with sand and water to form mortar for building purposes. When the masonry has been laid, the slaked lime in the mortar slowly begins to react with carbon dioxide to form calcium carbonate (limestone) according to the reaction: Ca(OH)2 + CO2 → CaCO3 + H2O. The carbon dioxide that takes part in this reaction is principally available in the air or dissolved in rainwater[6] so pure lime mortar will not recarbonate under water or inside a thick masonry wall.

The lime cycle for dolomitic and magnesium lime is not well understood[5] but more complicated because the magnesium compounds also slake to periclase which slake slower than calcium oxide and when hydrated produce several other compounds thus these limes contain inclusions of portlandite, brucite, magnesite and other magnesium hydroxycarbonate compounds. These magnesium compounds have very limited, contradictory research which questions whether they "...may be significantly reactive with acid rain, which could lead to the formation of magnesium sulfate salts."[7] Magnesium sulfate salts may damage the mortar when they dry and recrystalize due to expansion of the crystals as they form which is known as sulfate attack.

Lime used in building products is broadly classified as pure, hydraulic, and poor lime;[8] can be natural or artificial; and may be further identified by its magnesium content such as dolomitic or magnesium lime. Uses include lime mortar, lime plaster, lime render, lime-ash floors, tabby concrete, whitewash, silicate mineral paint, limestone blocks which may be of many types. The qualities of the many types of processed lime affect how they are used. The Romans used two types of lime mortar to make Roman concrete which allowed them to revolutionize architecture, sometimes called the Concrete Revolution.

Lime has many, complex qualities as a building product including workability which includes cohesion, adhesion, air content, water content, crystal shape, board-life, spreadability, flowability; bond strength; comprehensive strength; setting time; sand carrying capacity; hydrolocity; free lime content; vapor permeability; flexibility; and resistance to sulfates. These qualities are affected by many factors during each step of manufacturing and installation including the original ingredients of the source of lime; added ingredients before and during firing including inclusion of compounds from the fuel exhaust; firing temperature and duration; method of slaking including a hot mix (quicklime added to sand and water to make mortar), dry slaking and wet slaking; ratio of the mixture with aggregates and water; the sizes and types of aggregate; contaminants in the mixing water; workmanship; and rate of drying during curing.[9]

Pure lime is also known as fat, rich, common, air, slaked, slack, pickling, hydrated, and high calcium lime. It consists primarily of calcium hydroxide which is derived by slaking quicklime (calcium oxide), and may contain up to 5% of other ingredients. Pure lime sets very slowly through contact with carbon dioxide in the air and moisture; it is not a hydraulic lime so it will not set under water. Pure lime is pure white and can be used for whitewash, plaster, and mortar. Pure lime is soluble in water containing carbonic acid, a natural, weak acid which is a solution of carbon dioxide in water and acid rain so it will slowly wash away, but this characteristic also produces autogenous or self-healing process where the dissolved lime can flow into cracks in the material and be redeposited, automatically repairing the crack.

Semi-hydraulic lime, also called partially hydraulic and grey lime, sets initially with water and then continues to set with air. This lime is similar to hydraulic lime but has less soluble silica (usually minimum 6%) and aluminates, and will set under water but will never harden.[10]

In the United States the most commonly used masonry lime is Type S hydrated lime which is intended to be added to Portland cement to improve plasticity, water retention and other qualities. The S in type S stands for special which distinguishes it from Type N hydrated lime where the N stands for normal. The special attributes of Type S are its "...ability to develop high, early plasticity and higher water retentivity and by a limitation on its unhydrated oxide content."[14] The term Type S originated in 1946 in ASTM C 207 Hydrated Lime for Masonry Purposes. Type S lime is almost always dolomitic lime, hydrated under heat and pressure in an autoclave, and used in mortar, render, stucco, and plaster. Type S lime is not considered reliable as a pure binder in mortar due to high burning temperatures during production.

Kankar lime, a lime made from kankar which is a form of calcium carbonate.

Selenitic lime, also known as Scotts' cement after Henry Young Darracott Scott is a cement of grey chalk or similar lime, such as in the Lias Group, with about 5% added gypsum plaster (calcined gypsum).[10] Selenite is a type of gypsum, but selenitic cement may be made using any form of sulfate or sulfuric acid.[15] Sulphate arrests slaking, causes the cement to set quickly and stronger.

The Romans made concrete by mixing lime and volcanic rock. For underwater structures, lime and volcanic ash were mixed to form mortar, and this mortar and volcanic tuff were packed into wooden forms. The seawater instantly triggered an exothermic chemical reaction. The lime was hydrated – incorporating water molecules into its structure – and reacted with the ash to cement the whole mixture together.[16]