From Infogalactic: the planetary knowledge core
Jump to: navigation, search
This is an overview of the idea of a limit in mathematics. For specific uses of a limit, see Limit of a sequence and Limit of a function.

In mathematics, a limit is the value that a function or sequence "approaches" as the input or index approaches some value.[1] Limits are essential to calculus (and mathematical analysis in general) and are used to define continuity, derivatives, and integrals.

In formulas, a limit is usually written as

Limit of a function

Main article: Limit of a function 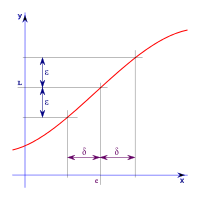 Whenever a point x is within δ units of c, f(x) is within ε units of L. 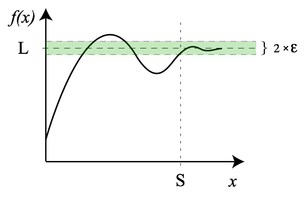 Suppose f is a real-valued function and c is a real number. The expression

means that f(x) can be made to be as close to L as desired by making x sufficiently close to c. In that case, the above equation can be read as "the limit of f of x, as x approaches c, is L".

Augustin-Louis Cauchy in 1821,[2] followed by Karl Weierstrass, formalized the definition of the limit of a function as the above definition, which became known as the (ε, δ)-definition of limit in the 19th century. The definition uses ε (the lowercase Greek letter epsilon) to represent any small positive number, so that "f(x) becomes arbitrarily close to L" means that f(x) eventually lies in the interval (L − ε, L + ε), which can also be written using the absolute value sign as | f(x) − L | < ε.[2] The phrase "as x approaches c" then indicates that we refer to values of x whose distance from c is less than some positive number δ (the lower case Greek letter delta)—that is, values of x within either (c − δ, c) or (c, c + δ), which can be expressed with 0 < | x − c | < δ. The first inequality means that the distance between x and c is greater than 0 and that x ≠ c, while the second indicates that x is within distance δ of c.[2]

Note that the above definition of a limit is true even if f(c) ≠ L. Indeed, the function f need not even be defined at c.

then f(1) is not defined (see division by zero), yet as x moves arbitrarily close to 1, f(x) correspondingly approaches 2:

Thus, f(x) can be made arbitrarily close to the limit of 2 just by making x sufficiently close to 1.

This can also be calculated algebraically, as

for all real numbers x ≠ 1.

In addition to limits at finite values, functions can also have limits at infinity. For example, consider

Limit of a sequence

Main article: Limit of a sequence

Formally, suppose a1, a2, ... is a sequence of real numbers. It can be stated that the real number L is the limit of this sequence, namely:

which is read as

"The limit of an as n approaches infinity equals L"

Intuitively, this means that eventually all elements of the sequence get arbitrarily close to the limit, since the absolute value | an − L | is the distance between an and L. Not every sequence has a limit; if it does, it is called convergent, and if it does not, it is divergent. One can show that a convergent sequence has only one limit.

In non-standard analysis (which involves a hyperreal enlargement of the number system), the limit of a sequence

can be expressed as the standard part of the value

of the natural extension of the sequence at an infinite hypernatural index n=H. Thus,

represented in the ultrapower construction by a Cauchy sequence

, is simply the limit of that sequence:

In this sense, taking the limit and taking the standard part are equivalent procedures.

A formal definition of convergence can be stated as follows. Suppose

is a sequence that converges to

with a fixed point

, there is a nice checklist for checking the convergence of the sequence

1) First check that p is indeed a fixed point:

3) If it is found that there is something better than linear the expression should be checked for quadratic convergence. Start by finding

All of the above notions of limit can be unified and generalized to arbitrary topological spaces by introducing topological nets and defining their limits.

An alternative is the concept of limit for filters on topological spaces.