Limit of a sequence

The sequence given by the perimeters of regular n-sided polygons that circumscribe the unit circle has a limit equal to the perimeter of the circle, i.e.

. The corresponding sequence for inscribed polygons has the same limit.

As the positive integer n becomes larger and larger, the value n sin(1/n) becomes arbitrarily close to 1. We say that "the limit of the sequence n sin(1/n) equals 1."

Limits can be defined in any metric or topological space, but are usually first encountered in the real numbers.

The Greek philosopher Zeno of Elea is famous for formulating paradoxes that involve limiting processes.

Leucippus, Democritus, Antiphon, Eudoxus and Archimedes developed the method of exhaustion, which uses an infinite sequence of approximations to determine an area or a volume. Archimedes succeeded in summing what is now called a geometric series.

In the 18th century, mathematicians such as Euler succeeded in summing some divergent series by stopping at the right moment; they did not much care whether a limit existed, as long as it could be calculated. At the end of the century, Lagrange in his Théorie des fonctions analytiques (1797) opined that the lack of rigour precluded further development in calculus. Gauss in his etude of hypergeometric series (1813) for the first time rigorously investigated under which conditions a series converged to a limit.

The modern definition of a limit (for any ε there exists an index N so that ...) was given by Bernhard Bolzano (Der binomische Lehrsatz, Prague 1816, little noticed at the time) and by Karl Weierstrass in the 1870s. 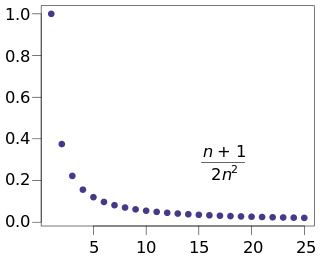 The plot of a convergent sequence {an} is shown in blue. Visually we can see that the sequence is converging to the limit 0 as n increases.

In the real numbers, a number

is the limit of the sequence

if the numbers in the sequence become closer and closer to

and not to any other number.

the limit of the sequence

if the following condition holds:

In other words, for every measure of closeness

, the sequence's terms are eventually that close to the limit. The sequence

is said to converge to or tend to the limit

If a sequence converges to some limit, then it is convergent; otherwise it is divergent.

Limits of sequences behave well with respect to the usual arithmetic operations. If

and, if neither b nor any

For any continuous function f, if

. In fact, any real-valued function f is continuous if and only if it preserves the limits of sequences (though this is not necessarily true when using more general notions of continuity).

Some other important properties of limits of real sequences include the following.

These properties are extensively used to prove limits without the need to directly use the cumbersome formal definition. Once proven that

it becomes easy to show that

), using the properties above.

is said to tend to infinity, written

if, for every K, there is an N such that, for every

; that is, the sequence terms are eventually larger than any fixed K. Similarly,

if, for every K, there is an N such that, for every

. This coincides with the definition given for real numbers when

For any continuous function f, if

. In fact, a function f is continuous if and only if it preserves the limits of sequences.

Limits of sequences are unique when they exist, as distinct points are separated by some positive distance, so for

less than half this distance, sequence terms cannot be within a distance

A point x of the topological space (X, τ) is the limit of the sequence (xn) if, for every neighbourhood U of x, there is an N such that, for every

. This coincides with the definition given for metric spaces if (X,d) is a metric space and

is the topology generated by d.

The limit of a sequence of points

in a topological space T is a special case of the limit of a function: the domain is

with the induced topology of the affinely extended real number system, the range is T, and the function argument n tends to +∞, which in this space is a limit point of

If X is a Hausdorff space then limits of sequences are unique where they exist. Note that this need not be the case in general; in particular, if two points x and y are topologically indistinguishable, any sequence that converges to x must converge to y and vice versa. 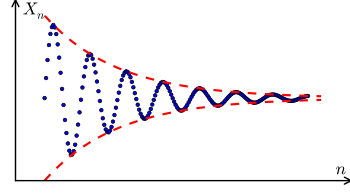 The plot of a Cauchy sequence (xn), shown in blue, as xn versus n. Visually, we see that the sequence appears to be converging to a limit point as the terms in the sequence become closer together as n increases. In the real numbers every Cauchy sequence converges to some limit.

A Cauchy sequence is a sequence whose terms ultimately become arbitrarily close together, after sufficiently many initial terms have been discarded. The notion of a Cauchy sequence is important in the study of sequences in metric spaces, and, in particular, in real analysis. One particularly important result in real analysis is Cauchy characterization of convergence for sequences:

A sequence is convergent if and only if it is Cauchy.

The definition of the limit using the hyperreal numbers formalizes the intuition that for a "very large" value of the index, the corresponding term is "very close" to the limit. More precisely, a real sequence

tends to L if for every infinite hypernatural H, the term xH is infinitely close to L, i.e., the difference xH - L is infinitesimal. Equivalently, L is the standard part of xH

Thus, the limit can be defined by the formula

where the limit exists if and only if the righthand side is independent of the choice of an infinite H.