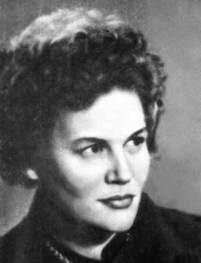 Lina Kostenko (Ukrainian: Ліна Василівна Костенко, born March 19, 1930 in Rzhyshchiv, Kiev Oblast, in the Ukrainian SSR of the Soviet Union) is a Ukrainian poet and writer, recipient of the Shevchenko Award (1987).

Kostenko is a leading representative of Ukrainian poets of the sixties known as the Sixtiers. This group started publishing during the 1950s and reached its apex during the early 1960s. It was during the 1950s when Kostenko published her first poems in major Ukrainian periodicals.

Kostenko was born in a family of teachers. In 1936, she moved from Rzhyshchiv to Kyiv, where she finished her secondary education.

Lina graduated with distinction from the Maxim Gorky Literature Institute in Moscow in 1956. Following her graduation she published three collections of poetry in 1957, 1958, and 1961. These books became immensely popular among her Ukrainian readers, however they also forced her into publication silence as she was unwilling to submit to Soviet authorities.

It wasn't until 1977 (16 years later) that her next major collection was published. She followed this with several more collections and a children's book called The Lilac King. In 1979 she followed with one of her greatest works the historical novel in verse, Marusia Churai, about at 17th century Ukrainian folksinger. Her most recent collection is Berestechko, a book length historical poem.

In 1999 she received an honorary professorship from the National University of Kyiv-Mohyla Academy.