Lina Solomonovna Stern (or Shtern; Russian: Лина Соломоновна Штерн; 26 August 1878 – 7 March 1968) was a Soviet biochemist, physiologist and humanist whose medical discoveries saved thousands of lives at the fronts of World War II. She is best known for her pioneering work on blood–brain barrier, which she described as hemato-encephalic barrier in 1921.[1]

Born in Libau in the Russian Empire (today Liepāja, Latvia) into a Jewish family and educated in Geneva, Switzerland, she pursued an academic career and performed original research in biochemistry and in the neurosciences. From 1918 onwards she was the first woman awarded professional rank at the University of Geneva, being a Professor of chemio-physiology, and researching cellular oxidation.[1]

In 1925 she had emigrated to the Soviet Union out of ideological convictions.[1] From 1925–1948 she served as Professor of the 2nd Medical Institute.

From 1929–1948, Stern was Director of Institute of Physiology of the USSR Academy of Sciences. Among many problems Stern and her group worked on were longevity and sleep. Under her leadership, multidisciplinary groups of colleagues worked on the problems of the hemato-encephalic and histohematic barriers. The results of this work were later implemented in clinical practice and saved thousands of lives at the fronts of World War II. In 1939 she became the first female full member of the Academy (academician).[1][2] In 1943 she won the Stalin Prize.[3]

A member of the Women's Anti-Fascist Committee and the Jewish Anti-Fascist Committee (JAC) since the breaking out of World War II, Stern was the sole survivor out of 15 arrested and convicted to death sentence when the JAC was eradicated in January 1949. Her death sentence was changed to a prison term, followed by five-year exile.[1] The exile was in Dzhambul (current Taraz), Kazakhstan.[citation needed] 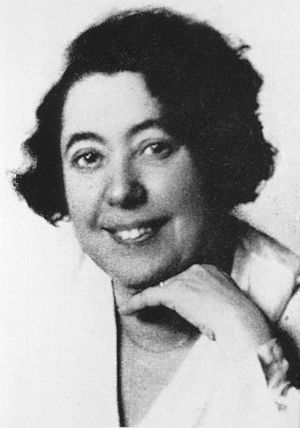 After Stalin's death in 1953 Lina Stern was allowed to return to Moscow and in 1954–1968 she headed the Department of Physiology at Biophysics Institute.:[4]