Lincoln County is a county located in east central Oklahoma. As of the 2010 census, the population was 34,273.[2] Its county seat is Chandler.[3]

In 2010, the center of population of Oklahoma was located in Lincoln County, near the town of Sparks.[5]

The United States purchased the large tract of land known as the Louisiana Purchase from France in 1803. Washington Irving, Charles J. Latrobe, and Count Albert de Pourtalès accompanied Henry L. Ellsworth and others on an expedition in Indian Territory that may have passed through the far northwestern corner of the future Lincoln County.[1]

The Osage hunted on land that includes present-day Lincoln County until they ceded the area in an 1825 treaty to the federal government. The government then assigned the land to the Creek and the Seminoles after they were removed from the southeastern United States. After the Civil War in 1866, these tribes were forced to give up lands that included present-day Lincoln County in Reconstruction Treaties for siding with the Confederacy.[1]

The federal government then used the area to resettle the Sac and Fox, Potawatomi, Kickapoo and Ioway tribes. Established in 1870, the Sac and Fox agency, established on the eastern edge of the present-day county, was the first settlement in the area.[1]

In 1890, the Jerome Commission negotiated with the tribes of the area such that they agreed to allotment of their reservation lands, except for the Kickapoo. Indian lands were allotted to individual tribal members and the excess were opened to white settlement in the Land Run of 1891. A separate land run was held later that year for the townsite of the predesignated county seat, Chandler. Lincoln County was organized and designated as County A. In 1895, the Kickapoo agreed to allotment and the land was claimed by settlers during the Land Run of 1895.[1]

The voters chose the name Lincoln County for County A in honor of President Abraham Lincoln, selecting it over the names Sac and Fox and Springer.[1] 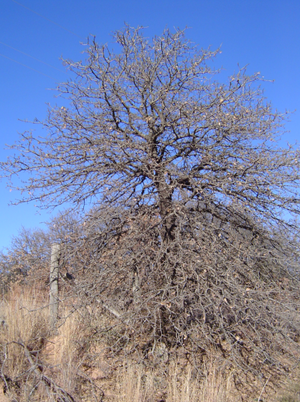 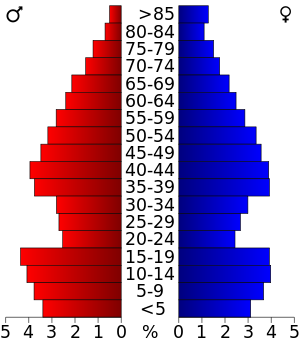 Age pyramid for Lincoln County, Oklahoma, based on census 2000 data.

The county economy has largely depended on agriculture. Cotton almost immediately became the dominant crop after white settlement. During the first decade of the twentieth century, Lincoln County was one of the top two counties producing cotton in Oklahoma. By the end of the Great Depression the economy had become more diversified. Oil furnished one-third of county tax revenue, and cattle raising and pecan growing became important income sources. By the turn of the 21st Century, the county economy had diversified and was based primarily on professional services, small businesses, and service industries.[1] 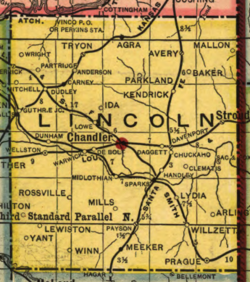 1905 map of Lincoln County showing locations of many of the old communities, post offices, and railroad stops which no longer exist.

The following sites in Lincoln County are listed on the National Register of Historic Places: