Linfield College is an American private institution of higher learning located in McMinnville, Oregon. As a four-year, undergraduate, liberal arts and sciences college with a campus in Portland, Oregon, it also has an adult degree program located online and in eight communities throughout the state. Linfield Wildcats athletics participates in the NCAA Division III Northwest Conference. There are a combined 2,466 students at Linfield, which employs more than 150 full-time professors. 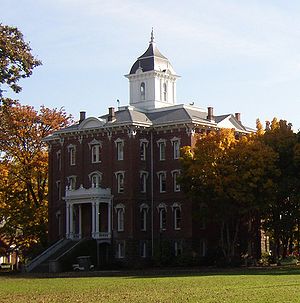 Linfield traces its history back to 1849 when the Oregon Baptist Educational Society was created in Oregon City.[4] That group organized in order to start a Baptist school in the region, which started as Oregon City College in 1849.[4] In 1855, Sebastian C. Adams began to agitate for a school in McMinnville. Adams and his associates were members of the Christian Church, and so the school became a Christian School. To begin, 6 acres (2.4 ha) of property were donated by W. T. Newby and a group was formed to establish the school. The group included William Dawson, James McBride, Newby, and Adams and they bore the major part of the expenses of starting the school. These men built a building and convinced Adams, who was a teacher, to operate the school. After about a year and a half and because of the difficulty of running the school alone and funding problems, Adams suggested that the school be turned over to the Baptists who were attempting to start up the West Union Institute that had been chartered in 1858 by the Oregon Territorial Legislature. The Adams group imposed the condition that the Baptists keep at least one professor employed continuously in the college department.[5] Other accounts indicate that the Baptist group purchased the land in 1857 in order to start their school.[4] The Baptist College at McMinnville was chartered in 1858 by the Oregon Territorial Legislature, and later became McMinnville College before acquiring its current name.[6]

File:MelroseHall2.jpg
Melrose Hall, built in 1929, is the administrative center of the college.

In 1922, the name was changed to Linfield College in memory of a Baptist minister, the Rev. George Fisher Linfield whose widow, Frances Eleanor Ross Linfield, gave a substantial donation to the college to promote Christian education and as a memorial to her late husband. Mrs. Linfield served as Dean of Women from 1921 to 1928, and sat on the Board of Directors from 1922 to her death in 1940. Her gift included real estate in Spokane, Washington, valued at $250,000. In his 1938 book, Bricks Without Straw: The Story of Linfield College, Professor Jonas A. "Steine" Jonasson quotes from the minutes of the college's board of trustees to explain Mrs. Linfield's motivation for her large land gift to the college: "Mrs. Linfield's dual purpose in making the gift to McMinnville College was to 'perpetuate the name, scholarly attainments and Christian influence of her late husband, Rev. George Fisher Linfield, and to promote the cause of Christian education.'"[7]

In 1982, the Linfield College-Portland Campus was established when the college entered into an affiliation with Legacy Good Samaritan Hospital & Medical Center and began offering a bachelor's degree program in nursing.

In the 2007–2008 academic year Linfield celebrated its sesquicentennial anniversary.[8]

File:NorthupHall.jpg
T.J. Day Hall (formerly Northup Hall), built in 1936, was the library through 2003.

For six consecutive years, Linfield was named the No. 1 college in the western region by US News & World Report for the Comprehensive Colleges-Bachelor's category.[9] In the U.S. News and World Report College Rankings for 2007, Linfield College was recategorized and ranked as a Liberal Arts College in a restructuring of rankings.[10] In 2011, it was ranked 121st among liberal arts colleges.[11][12] Linfield has been named by The Princeton Review as one of the Best Colleges in the Western Region.[13] 93 percent of Linfield professors have the highest degree in their field.[2] In 2009, Language Professor Peter Richardson was awarded Oregon Professor of the Year.[14] In 2010 the Chronicle of Higher Education named Linfield a top producer of Fulbright Scholars, as since 1999, 22 graduates have won Fulbright grants.[citation needed] Linfield has a dual enrollment agreement with Portland Community College.[15]

KSLC is an entirely student-run college radio station with reception throughout town and the immediate vicinity. The full-time student-staff consists of nine members, who work under the guidance of one faculty advisor. Students are encouraged to get involved through the electronic media practices class or just volunteer. It plays a wide variety of music and also broadcasts Linfield Wildcat sporting events. There are specialty shows every weeknight: Punk, Heavy Rock, World Music and Hip Hop are among the most popular radio formats . The station was housed in Pioneer Hall until 2007 when a new facility was completed in the basement of Renshaw Hall.

Notable people who have attended or taught at Linfield College include athletes such as Scott Brosius, former New York Yankee and 1998 World Series MVP, Kenneth Scott Latourette, scholar of Christianity and Chinese History, Douglas Robinson, translation theorist, Amy Tan,[18] the author of The Joy Luck Club, The Bonesetter's Daughter, and The Kitchen God's Wife, and Joe Medicine Crow, Native American historian and the only Linfield College graduate to receive the Presidential Medal of Freedom.