From Infogalactic: the planetary knowledge core
(Redirected from Lion of St Mark)
Jump to: navigation, search
This article is about the traditional icon of St Mark. For the ancient bronze statue, see Lion of Venice. For the Venetian nationalist party, see Lion of Saint Mark (political party). 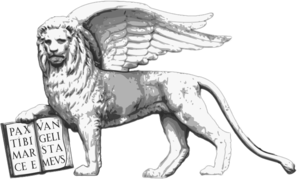 The winged lion of St Mark.

The Lion of Saint Mark, representing the evangelist St Mark, pictured in the form of a winged lion,[1] is the symbol of the city of Venice and formerly of the Republic of Venice. It appears also in both merchant and military naval flags of the Italian Republic. The Lion of Saint Mark is also the symbol of the award of the Venice Film Festival, the "Golden Lion", and of the insurance company Assicurazioni Generali.

Other elements often included in depictions of the lion include a halo over his head, a book, and a sword in its paws.

Venetian tradition states that when St. Mark was traveling through Europe, he arrived at a lagoon in Venice, where an angel appeared to him and said "Pax tibi Marce, evangelista meus. Hic requiescet corpus tuum." (May Peace be with you, Mark, my evangelist. Here your body will rest.) This (possibly apocryphal) tradition was used as justification by Rustico da Torcello and Bon da Malamocco[2] in 828[3] for stealing the remains of St. Mark from his grave in Alexandria,[4] and moving them to Venice, where they were eventually interred in the Basilica of St. Mark.[5] 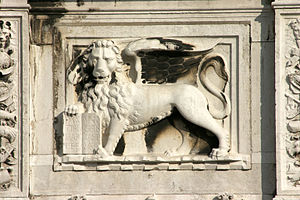 The Lion of St Mark in Venice.

St Mark, represented as a lion, is a typical Christian iconography derived from the prophetic visions contained in the verse of the Apocalypse of St John 4:7. The lion is one of the four living creatures described in the book as a place around the throne of the Almighty and they are chosen as symbols of the four evangelists. These "beings" were previously described by the prophet Ezekiel.

"Behold, I send my messenger ahead of you, he will prepare your way."

The voice of the one who cries in the wilderness: "Prepare Ye the way of the Lord, make straight his paths." (Gospel according to Mark 1:1–3)

The lion also symbolizes the power of the Evangelist's word, the wings symbolize the spiritual elevation, while the halo is the traditional Christian symbol of holiness.

However, the lion symbols express also the significance of majesty and power (drawn especially from the upward feline tail), while the book expresses the concepts of wisdom and peace and the halo gives an image of religious piety.

There are many symbolic interpretations with the possible combination of sword and book:

However, these interpretations are not universally accepted as the Republic of Venice (La Serenissima) never codified its symbols. Rare, but are presented, are also depictions of the lion without a book or a sword and sometimes without the halo (especially in a representation of a statue).

In some depictions the lion rests his front paws on the ground, often in cities with rivers or in ones close to water, indicating the Venetian balanced power on land and sea.

The Venetian lion appears in two distinct forms. One is as a winged animal resting on water, to symbolise dominance over the seas, holding St. Mark’s Gospel under a front paw. You can see these mighty animals all round the Mediterranean, usually on top of a classical stone column.[6]

The other form is known as the lion “in moleca”, in the form of a crab. Here the lion is depicted full-faced with its wings circled around the head resembling the claws of a crustacean. It is emerging from water, so that the lion “in moleca” is associated with the lagoon and the city, whereas the standing winged lion is thought to be more associated with Venetian territory around the Mediterranean.[6]