The Lipps–Meyer law, named for Theodor Lipps (1851–1914) and Max Friedrich Meyer (1873–1967), hypothesizes that the closure of melodic intervals is determined by "whether or not the end tone of the interval can be represented by the number two or a power of two",[1] in the frequency ratio between notes (see octave). 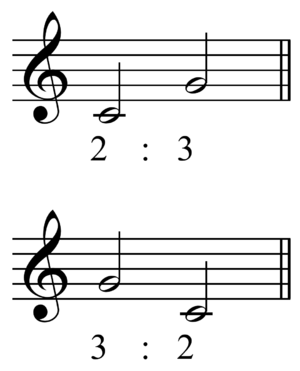 "The 'Lipps–Meyer' Law predicts an 'effect of finality' for a melodic interval that ends on a tone which, in terms of an idealized frequency ratio, can be represented as a power of two."[2]

The reason for the effect of finality of such interval ratios may be seen as follows. If

is the interval ratio in consideration, where

is a positive integer and

is the higher harmonic number of the ratio, then its interval can be determined by taking the base-2 logarithm

. The difference of these terms is the harmonic series representation of the interval in question (using harmonic numbers), whose bottom note

is a transposition of the tonic by n octaves. This suggests why descending interval ratios with denominator a power of two are final. A similar situation is seen if the term in the numerator is a power of two.[3][citation needed] [4]