From Infogalactic: the planetary knowledge core
Jump to: navigation, search
This article is about the liquid form of the element oxygen. For the commercial dietary supplement product, see Liquid Oxygen (supplement).
"LOX" redirects here. For other uses, see Lox (disambiguation).

Liquid oxygen — abbreviated LOx, LOX or Lox in the aerospace, submarine and gas industries — is one of the physical forms of elemental oxygen.

File:Liquid Oxygen.png
The blue color of liquid oxygen in a dewar flask

Because of its cryogenic nature, liquid oxygen can cause the materials it touches to become extremely brittle. Liquid oxygen is also a very powerful oxidizing agent: organic materials will burn rapidly and energetically in liquid oxygen. Further, if soaked in liquid oxygen, some materials such as coal briquettes, carbon black, etc., can detonate unpredictably from sources of ignition such as flames, sparks or impact from light blows. Petrochemicals, including asphalt, often exhibit this behavior.

The tetraoxygen molecule (O4) was first predicted in 1924 by Gilbert N. Lewis, who proposed it to explain why liquid oxygen defied Curie's law.[4] Modern computer simulations indicate that although there are no stable O4 molecules in liquid oxygen, O2 molecules do tend to associate in pairs with antiparallel spins, forming transient O4 units.[5]

Liquid nitrogen has a lower boiling point at −196 °C (77 K) than oxygen's −183 °C (90 K), and vessels containing liquid nitrogen can condense oxygen from air: when most of the nitrogen has evaporated from such a vessel there is a risk that liquid oxygen remaining can react violently with organic material. Conversely, liquid nitrogen or liquid air can be oxygen-enriched by letting it stand in open air; atmospheric oxygen dissolves in it, while nitrogen evaporates preferentially.

In commerce, liquid oxygen is classified as an industrial gas and is widely used for industrial and medical purposes. Liquid oxygen is obtained from the oxygen found naturally in air by fractional distillation in a cryogenic air separation plant.

Liquid oxygen is a common cryogenic liquid oxidizer propellant for spacecraft rocket applications, usually in combination with liquid hydrogen, kerosene or methane.[6][7] Liquid oxygen is useful in this role because it creates a high specific impulse.[citation needed] It was used in the very first rocket applications like the V2 missile (under the name A-Stoff and Sauerstoff) and Redstone, R-7 Semyorka, Atlas boosters, and the ascent stages of the Apollo Saturn rockets. Liquid oxygen was also used in some early ICBMs, although more modern ICBMs do not use liquid oxygen because its cryogenic properties and need for regular replenishment to replace boiloff make it harder to maintain and launch quickly. Many modern rockets use liquid oxygen, including the main engines on the now-retired Space Shuttle.

Liquid oxygen also had extensive use in making oxyliquit explosives, but is rarely used now due to a high rate of accidents.[citation needed]

It is also used in the activated sludge processing in waste water treatment to maintain a high level of micro-organisms.[citation needed] 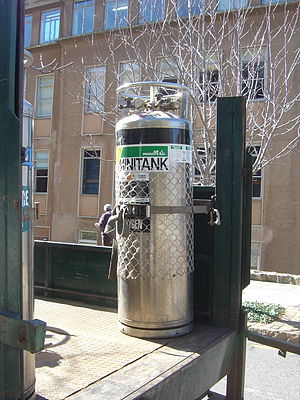