The highest specific impulse chemical rockets (liquid-propellant rockets) use liquid fuel propellants. Approximately 170 different liquid propellants have undergone lab testing. This estimate excludes minor changes to a specific propellant such as propellant additives, corrosion inhibitors, or stabilizers. In the U.S. alone at least 25 different propellant combinations have been flown.[1] However, there has not been a completely new propellant used in flight for nearly 30 years.[2] Many factors go into choosing a propellant for a liquid propellant rocket engine. The primary factors include ease of operation, cost, hazards/environment and performance. Bipropellants can be either hypergolic propellant or nonhypergolic. A hypergolic combination of oxidizer and fuel will start to burn upon contact. A nonhypergolic needs an ignition source.[3] 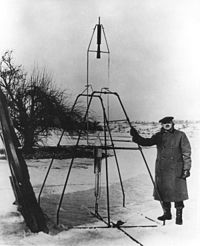 Robert H. Goddard on March 16, 1926, holding the launching frame of his most notable invention — the first liquid-fueled rocket.

On March 16, 1926, Robert H. Goddard used liquid oxygen (LOX) and gasoline as propellants for his first partially successful liquid rocket launch. Both are readily available, cheap and highly energetic. Oxygen is a moderate cryogen — air will not liquefy against a liquid oxygen tank, so it is possible to store LOX briefly in a rocket without excessive insulation. Gasoline has since been replaced by different hydrocarbon fuels, for example RP-1 - a highly refined grade of kerosene. This combination is quite practical for rockets that need not be stored, and to this day, it is used in the first stages of many orbital launchers.

Germany had very active rocket development before and during World War II, both for the strategic V-2 rocket and other missiles. The V-2 used an alcohol/LOX liquid propellant engine, with hydrogen peroxide to drive the fuel pumps. The alcohol was mixed with water for engine cooling. Both Germany and the United States developed reusable liquid propellant rocket engines that used a storeable liquid oxidizer with much greater density than LOX and a liquid fuel that would ignite spontaneously on contact with the high density oxidizer. The German engine was powered by hydrogen peroxide and a fuel mixture of hydrazine hydrate and methyl alcohol. The U.S. engine was powered by nitric acid oxidizer and aniline. Both engines were used to power aircraft, the Me-163B Komet interceptor in the case of the German engine and RATO units to assist take-off of aircraft in the case of the U.S. engine.

During the 1950s and 1960s there was a great burst of activity by propellant chemists to find high-energy liquid and solid propellants better suited to the military. Large strategic missiles need to sit in land-based or submarine-based silos for many years, able to launch at a moment's notice. Propellants requiring continuous refrigeration, and which cause their rockets to grow ever-thicker blankets of ice, are not practical. As the military is willing to handle and use hazardous materials, a great number of dangerous chemicals were brewed up in large batches, most of which wound up being deemed unsuitable for operational systems. In the case of nitric acid, the acid itself (HNO3) is unstable, and corrodes most metals, making it difficult to store. The addition of a modest amount of nitrogen tetroxide, N2O4, turns the mixture red and keeps it from changing composition, but leaves the problem that nitric acid corrodes containers it is placed in, releasing gases that can build up pressure in the process. The breakthrough was the addition of a little hydrogen fluoride (HF), which forms a self-sealing metal fluoride on the interior of tank walls that Inhibited Red Fuming Nitric Acid. This made "IRFNA" storeable. Propellant combinations based on IRFNA or pure N2O4 as oxidizer and kerosene or hypergolic (self igniting) aniline, hydrazine or unsymmetrical dimethylhydrazine (UDMH) as fuel were then adopted in the United States and the Soviet Union for use in strategic and tactical missiles. The self-igniting storeable liquid bi-propellants have somewhat lower specific impulse than LOX/kerosene but have higher density so a greater mass of propellant can be placed in the same sized tanks.

Many early rocket theorists believed that hydrogen would be a marvelous propellant, since it gives the highest specific impulse. It is also considered the cleanest when used with a liquid oxygen oxidizer because the only by-product is water. As hydrogen in any state is very bulky, for lightweight vehicles it is typically stored as a deeply cryogenic liquid. This storage technique was mastered in the early 1950s as part of the hydrogen bomb development program at Los Alamos. It was then adopted for hydrogen fueled stages such as Centaur and Saturn upper stages in the late 50s and early 1960s. Even as a liquid, hydrogen has low density, requiring large tanks and pumps, and the extreme cold requires tank insulation. This extra weight reduces the mass fraction of the stage or requires extraordinary measures such as pressure stabilization of the tanks to reduce weight. Pressure stabilized tanks support most of the loads with internal pressure rather than with solid structures. Most rockets that use hydrogen fuel use it in upper stages only.

Gaseous hydrogen is commercially produced by the fuel-rich burning of natural gas. Carbon forms a stronger bond with oxygen so the gaseous hydrogen is left behind. Liquid hydrogen is stored and transported without boil-off because helium, which has a lower boiling point than hydrogen, is the cooling refrigerant. Only when hydrogen is loaded on a launch vehicle (where there is no refrigeration) does it vent to the atmosphere.[4]

Launch pad fires due to spilled kerosene are more damaging than hydrogen fires, primarily for two reasons. First, kerosene burns about 20% hotter (absolute temperature) than hydrogen. The second and more significant reason is buoyancy. Since hydrogen is a deep cryogen it boils quickly and rises due to its very low density as a gas. Even when hydrogen burns, the gaseous H2O that is formed has a molecular weight of only 18 u compared to 29.9 u for air, so it rises quickly as well. Kerosene on the other hand falls to the ground and burns for hours when spilled in large quantities, unavoidably causing extensive heat damage that requires time consuming repairs and rebuilding. This is a lesson most frequently experienced by test stand crews involved with firings of large, unproven rocket engines. Hydrogen-fueled engines also have some special design requirements such as running propellant lines horizontally so traps do not form in the lines and cause ruptures due to boiling in confined spaces. These considerations, however, apply to all cryogens such as liquid oxygen and liquid natural gas as well. Use of liquid hydrogen fuel has an excellent safety record and superb performance that is well above that of all other practical chemical rocket propellants. (See bipropellant rocket engine performance table below.)

The highest specific impulse chemistry ever test-fired in a rocket engine was lithium and fluorine, with hydrogen added to improve the exhaust thermodynamics (all propellants had to be kept in their own tanks, making this a tripropellant). The combination delivered 542 s specific impulse in a vacuum, equivalent to an exhaust velocity of 5320 m/s. The impracticality of this chemistry highlights why exotic propellants are not actually used: to make all three components liquids, the hydrogen must be kept below -252 °C (just 21 K) and the lithium must be kept above 180 °C (453 K). Lithium and fluorine are both extremely corrosive, lithium ignites on contact with air, fluorine ignites on contact with most fuels, including hydrogen. Fluorine and the hydrogen fluoride (HF) in the exhaust are very toxic, which makes working around the launch pad difficult, damages the environment, and makes getting a launch license that much more difficult. Finally, both lithium and fluorine are expensive compared to most rocket propellants. This combination has therefore never flown.

In November 2012, SpaceX CEO Elon Musk announced a new direction for the propulsion side of SpaceX: developing methane/LOX rocket engines.[5] SpaceX had previously used only LOX/RP-1 for all of their primary propulsion engines. As of March 2014[update], SpaceX is actively developing the Raptor methalox bipropellant rocket engine with over 1,000,000 lbf (4,400 kN) of thrust. The engine is slated to be used on a future super-heavy rocket, the MCT launch vehicle.[6][7]

Blue Origin and United Launch Alliance announced in September 2014 the joint development of the BE-4 lox/methane engine. The BE-4 will provide 550,000 lbf of thrust.[9]

Here are some common liquid fuel combinations in use today:

The liquid rocket engine propellant combination of liquid oxygen and hydrogen offers the highest specific impulse of currently used conventional rockets. This extra performance largely offsets the disadvantage of low density. Low density of a propellant leads to larger fuel tanks. However, a small increase in specific impulse in an upper stage application can have a significant increase in payload to orbit capability.[2]

JANAF thermochemical data used throughout. Calculations performed by Rocketdyne, results appear in "Modern Engineering for Design of Liquid-Propellant Rocket Engines", Huzel and Huang.[10] Some of the units have been converted to metric, but pressures have not. These are best-possible specific impulse calculations.

Definitions of some of the mixtures: