Lisa Murray Madigan[1] (born July 30, 1966) has been the 41st Attorney General of the US state of Illinois since 2003, when she became the first female attorney general for Illinois. She is a Democrat and the stepdaughter of Michael Madigan, who has been Speaker of the Illinois House of Representatives for most of the last quarter century.[2]

Prior to becoming an attorney, she was a teacher and community organizer, developing after-school programs to help keep kids involved in education and away from drugs and gangs. Madigan also volunteered as a high school teacher in South Africa during apartheid. Madigan later worked as a litigator for the Chicago law firm of Sachnoff & Weaver. 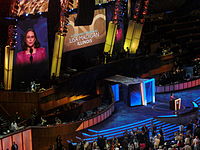 Madigan speaks on the first day of the 2008 Democratic National Convention in Denver, Colorado.

Madigan was an Illinois Senator from 1998 through 2002, during which time she worked down the hall from Barack Obama. In 2002 she ran for Attorney General of Illinois and narrowly defeated Joe Birkett with 50.4% of the vote. In 2006 she was re-elected with 72.4% of the vote against Tazewell County State's Attorney Stewart "Stu" Umholtz.

Notably, Madigan became the first Illinois Attorney General in over 25 years to personally argue a case before the United States Supreme Court. In 2004, she successfully argued Illinois v. Caballes, where the court reaffirmed the ability of police officers to use specially trained dogs without a search warrant or probable cause to detect the presence of illegal drugs during traffic stops.

In 2002, Madigan received a $25,000 donation from a black metal musician Andrew Harris. When Harris's relation to the black metal band Judas Iscariot came to light, Madigan agreed to donate the money to anti-hate groups, according to the Chicago Tribune.[4]

Madigan has also had a strained relationship with former Illinois Governor Rod Blagojevich, due at least in part to her father Michael Madigan's ongoing feud with Blagojevich. 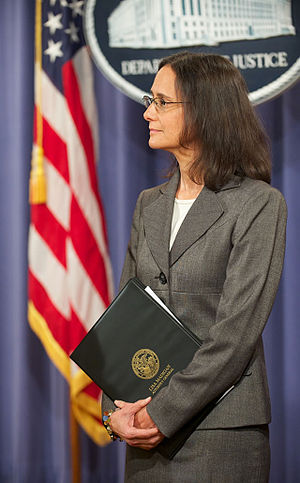 She was considered a potential candidate for Governor of Illinois[5] or the United States Senate in the near future; however, on July 8, 2009, she announced she was running for reelection as Illinois Attorney General instead of seeking higher office in 2010.[6] She was considered a possible replacement for Barack Obama's Senate seat following his victory in the 2008 presidential election, although Madigan herself described her chances of being appointed as "less than zero."[7] Roland Burris was appointed to the U.S. Senate instead. During the Blagojevich Senate appointment scandal, Madigan was speculated to be "Senate Candidate #2" in the complaint against Blagojevich although no wrongdoing on her part was implied. Notably, on December 12, 2008, Madigan attracted national attention after filing a motion with the Supreme Court of Illinois to temporarily remove Blagojevich from office and install Lt. Gov. Pat Quinn as governor. Though the motion was denied by the court without a hearing, Blagojevich was later impeached and convicted and Quinn was sworn in as governor.

She is widely speculated to harbor intents to pursue a higher political office, and has been cited by The New York Times to be among the seventeen most likely women to become the first female President of the United States.[8]

On July 14, 2013, Madigan, who was widely expected to run, announced she would not run for governor in 2014 because of her father’s decision to stay in his post as speaker of the Illinois House, but that she would run for reelection instead.[9]

Madigan received the John F. Kennedy New Frontier Award in 2005, an award presented annually to "exceptional young Americans under the age of 40 whose contributions in elective office, community service or advocacy demonstrate the impact and value of public service in the spirit of John F. Kennedy."[10]

Madigan is married to cartoonist Pat Byrnes, and they have two daughters.