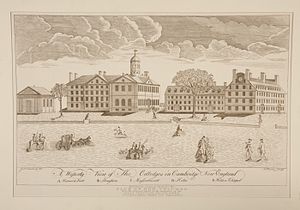 The Colonial Colleges are nine institutions of higher education chartered in the American Colonies before the United States of America became a sovereign nation after the American Revolution.[1] These nine have long been considered together, notably in the survey of their origins in the 1907 The Cambridge History of English and American Literature.[2] Seven of the nine colonial colleges are part of the Ivy League athletic conference: Harvard, Yale, Princeton, Penn, Columbia, Brown, and Dartmouth. (The eighth member of the Ivy League, Cornell University, was founded in 1865.)

The two colonial colleges not in the Ivy League are now both public universities—the College of William & Mary in Virginia and Rutgers University. William & Mary was a private institution from 1693 until just after the American Civil War, when it received some support from the state. It became public in 1906. Rutgers became the state university of New Jersey after World War II.

Seven of the nine colonial colleges began their histories as institutions of higher learning de novo (i.e., with no predecessor parent organization). Dartmouth College began operating in 1768 as the collegiate department of Moor's Charity School, a secondary school started in 1754 by Dartmouth founder Eleazar Wheelock. Dartmouth considers its founding date to be 1769, when it was granted a collegiate charter. The University of Pennsylvania began operating in 1751 as a secondary school, the Academy of Philadelphia, and added an institution of higher education in 1755 with the granting of a charter to the College of Philadelphia.

Several other colleges and universities can be traced to colonial-era "academies" or "schools," but are not considered Colonial Colleges because they were not formally chartered as colleges with degree-granting powers until after the formation of the United States of America in 1776. Listed below are the founding dates of the schools which served as predecessor entities and the years in which they were chartered to operate an institution of higher learning.