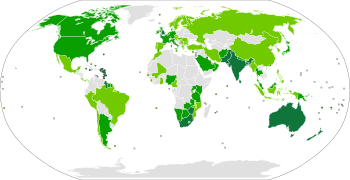 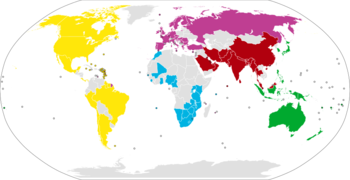 The International Cricket Council (ICC) was founded at Lord's on 15 June 1909 as the Imperial Cricket Conference,[1] with Australia, England, and South Africa as its founding members. In the beginning, only countries within the commonwealth could join.[2] These members were then joined by India, New Zealand, and the West Indies in 1926 and later by Pakistan in 1953.[3] In 1961, South Africa resigned due to their leaving the Commonwealth.[3] The Imperial Cricket Conference was renamed the International Cricket Conference in 1965 with new rules permitting countries from outside the Commonwealth to be elected into the governing body for the first time.[2] Any new member elected to the governing body could only be an Associate Member with the possibility of being promoted to a Full Member. The first Associates were Fiji and the USA.[2] In 1989, the ICC was again renamed, this time to International Cricket Council.[2] South Africa was reelected as a Full Member to the ICC in 1991 and Zimbabwe was elected in 1992.[3] The most recent new Full Member is Bangladesh, which was elected in 2000.[3] The ICC currently has 105 members.

Full Members are the governing bodies for cricket in a country or associated countries. Full Members may also represent a geographical area. All Full Members have a right to send one representative team to play official Test matches. Also, all Full Member nations are automatically qualified to play ODIs and Twenty20 Internationals.[2] West Indies cricket team does not represent one country, but rather an amalgamation of more than 20 countries and territories from the Caribbean. The English Cricket team represents both England and Wales. Here is the official ranking site.

Associate Members are countries where cricket is firmly established and organised but do not qualify for Full Membership.[2] There are 38 Associate Members, Oman, Afghanistan and Vanuatu being the recently promoted.

An associate member must maintain the following criteria along with other administration requirements of the national governing body:[6]

The associate teams who currently hold ODI status are:

The associate teams who currently hold T20I status are:

Affiliate members are countries where the ICC recognises that cricket is played according to the Laws of Cricket.[2] There are 57 Affiliate Members. An affiliate member must maintain the following criteria along with other administration requirements of the national governing body:[38]

In order for an affiliate member to be considered for becoming to an associate member the national governing body must demonstrate that it has met the criteria for associate membership and must have also met the following playing standards within the last three years:[6]