List of Justices of the Supreme Court of the United States

The Supreme Court was created in 1789 by Article III of the United States Constitution, which stipulated that the "judicial Power of the United States, shall be vested in one supreme Court" together with any lower courts Congress may establish.[3] Congress organized the Court that year with the passage of the Judiciary Act of 1789. It specified the Court's original and appellate jurisdiction, created thirteen judicial districts, and fixed the number of justices at six (one chief justice and five associate justices).[7][8]

Since 1789, Congress has occasionally altered the size of the Supreme Court, historically in response to the country's own expansion in size. An 1801 act would have decreased the Court's size to five members upon its next vacancy. However, an 1802 act negated the effects of the 1801 act upon the Court before any such vacancy occurred, maintaining the Court's size at six members. Later legislation increased its size to seven members in 1807, to nine in 1837, and to ten in 1863. An 1866 act was to have reduced the Court's size from ten members to seven upon its next three vacancies, and two vacancies did occur during this period. However, before a third vacancy occurred, the Judiciary Act of 1869 intervened, restoring the Court's size to nine members, where it has remained since.[9]

While the justices of the Supreme Court are appointed for life, many have retired or resigned. Beginning in the early 20th century, many justices who left the Court voluntarily did so by retiring from the Court without leaving the federal judiciary altogether. A retired justice, according to the United States Code, is no longer a member of the Supreme Court, but remains eligible to serve by designation as a judge of a U.S. Court of Appeals or District Court, and many retired justices have served in these capacities. Historically, the average length of service on the Court has been less than 15 years. However, since 1970 the average length of service has increased to about 26 years.[10]

Current justices of the Supreme Court

There are currently eight justices serving on the Supreme Court (the ninth position has been vacant since the July 31, 2018 retirement of Justice Anthony Kennedy); listed in order of seniority, they are:

All justices of the Supreme Court

This graphical timeline depicts the progression of the justices on the Supreme Court. Information regarding each justice's predecessors, successors and fellow justices, as well as their tenure on the court can be gleaned (and comparisons between justices drawn) from it. Additionally, The progression of presidents, along with the number of justices each nominated, is shown at the top of the timeline to give a more detailed historical context. Regarding the associate justice seat numbers, due to the several changes in the size of the Court since 1789, two of the ten seats chronicled below—"Seat 7" and "Seat 5"—have been abolished, both as a result of the Judicial Circuits Act of 1866. The associate justice "seat 1" is currently vacant, following the retirement of Justice Anthony Kennedy. 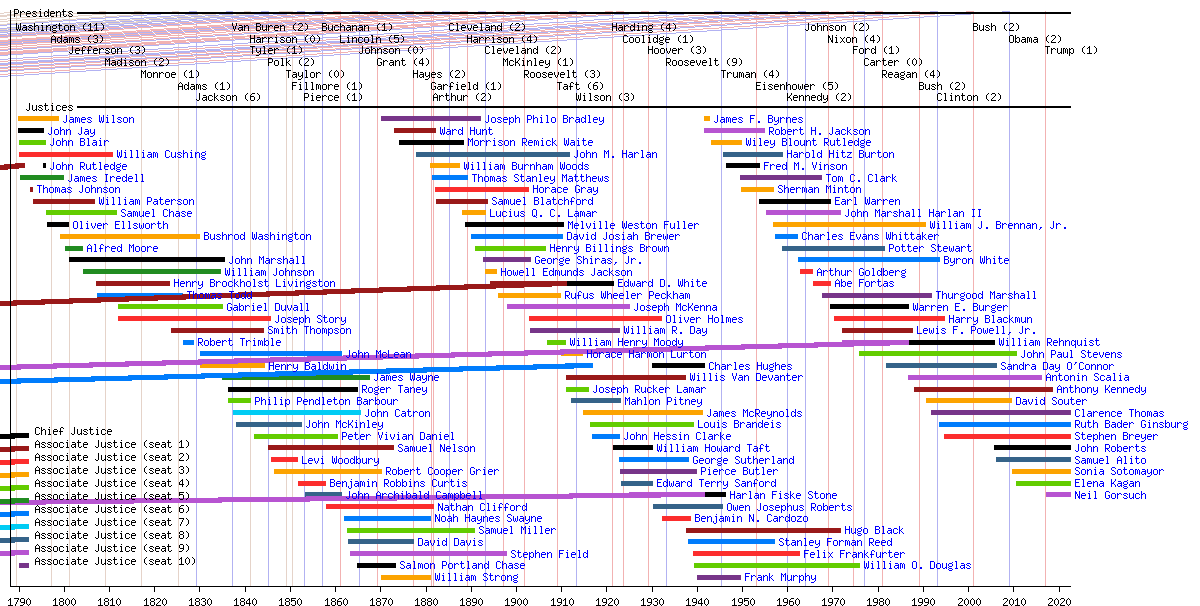