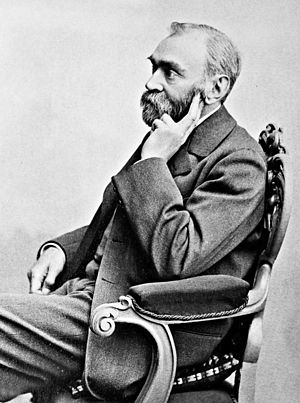 The Nobel Prize in Chemistry was established in the 1895 will of Swedish chemist Alfred Nobel.

The Nobel Prize in Chemistry (Swedish: Nobelpriset i kemi) is awarded annually by the Royal Swedish Academy of Sciences to scientists in the various fields of chemistry. It is one of the five Nobel Prizes established by the 1895 will of Alfred Nobel, who died in 1896. These prizes are awarded for outstanding contributions in chemistry, physics, literature, peace, and physiology or medicine.[1] As dictated by Nobel's will, the award is administered by the Nobel Foundation and awarded by a committee that consists of five members elected by the Royal Swedish Academy of Sciences.[2] The first Nobel Prize in Chemistry was awarded in 1901 to Jacobus Henricus van 't Hoff, of the Netherlands. Each recipient receives a medal, a diploma and a monetary award prize that has varied throughout the years.[3] In 1901, van 't Hoff received 150,782 SEK, which is equal to 7,731,004 SEK in December 2007. The award is presented in Stockholm at an annual ceremony on December 10, the anniversary of Nobel's death.[4]

At least 25 laureates have received the Nobel Prize for contributions in the field of organic chemistry, more than any other field of chemistry.[5] Two winners of the Nobel Prize in Chemistry, Germans Richard Kuhn (1938) and Adolf Butenandt (1939), were not allowed by their government to accept the prize. They would later receive a medal and diploma, but not the money. Frederick Sanger is one out of two laureates to be awarded the Nobel prize twice in the same subject, in 1958 and 1980. John Bardeen is the other and was awarded the Nobel Prize in physics in 1956 and 1972. Two others have won Nobel Prizes twice, one in chemistry and one in another subject: Maria Skłodowska-Curie (physics in 1903, chemistry in 1911) and Linus Carl Pauling (chemistry in 1954, peace in 1962).[6] Four women have won the prize: Maria Skłodowska-Curie, Irène Joliot-Curie (1935), Dorothy Hodgkin (1964), and Ada Yonath (2009).[7] As of 2015, the prize has been awarded to 172 individuals. There have been eight years in which the Nobel Prize in Chemistry was not awarded.

^ A. The form and spelling of the names in the name column is according to nobelprize.org, the official website of the Nobel Foundation. Alternative spellings and name forms, where they exist, are given at the articles linked from this column. Where available, an image of each Nobel laureate is provided. For the official pictures provided by the Nobel Foundation, see the pages for each Nobel laureate at nobelprize.org.

^ B. The information in the country column is according to nobelprize.org, the official website of the Nobel Foundation. This information may not necessarily reflect the recipient's birthplace or citizenship.

^ C. The citation for each award is quoted (not always in full) from nobelprize.org, the official website of the Nobel Foundation. The links in this column are to articles (or sections of articles) on the history and areas of chemistry for which the awards were presented. The links are intended only as a guide and explanation. For a full account of the work done by each Nobel laureate, please see the biography articles linked from the name column.