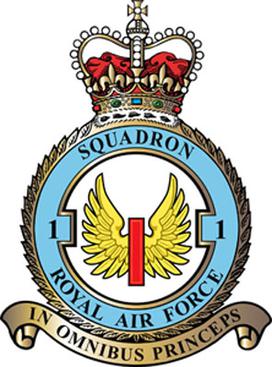 Squadrons are the main form of flying unit of the Royal Air Force (RAF). These include Royal Flying Corps (RFC) and Royal Naval Air Service (RNAS) squadrons incorporated into the RAF when it was formed on 1 April 1918, during the First World War. Other squadrons of the RAF include those from Commonwealth air forces which have served within the RAF structure and squadrons of the Fleet Air Arm before it transferred to the Royal Navy in 1939.

Some squadrons have an individual tradition of presenting their squadron number in Roman numerals or using a suffix to their squadron number (such as "(F)" for "Fighter", "(B)" for "Bomber" or "(AC)" for "Army Co-operation") to indicate a past or present role. An example would be No. 18 (Bomber) Squadron RAF which currently actually operates the heavy-lift Chinook helicopter. However, these practices have, at least in the past, been deprecated at higher levels and generally only apply to certain squadrons with long traditions, especially those numbered from 1-20.[1]

Flying training units are generally (Reserve) squadrons, although they are regular active-duty units; exceptions to this include the Operational Conversion Units as they provide aircrew training on front line aircraft. Some Squadron names include the location they were originally formed.

The first squadrons to carry numbers above 200 were former RNAS squadrons that were renumbered upon amalgamation with 200 added to their RNAS squadron number. Independent flights of the RNAS were grouped together in squadrons and given numbers in the 200 series.

Note: the RAF never had a No. 314 Squadron, although they did use the number as No. 314 Technical Services Unit. A proposed 314 Squadron was allocated squadron codes UY for the period April to September 1939.[3]

Note: the RAF never had a No. 319 Squadron; the "Polish Fighting Team" was attached to No. 145 Fighter Squadron. A proposed 319 Squadron was allocated squadron codes VE for the period April to September 1939.[3] There was also 663 Artillery Observation Squadron; No. 138 Special Duty Squadron Polish Flight "C" and No. 1586 Polish Special Duty Flight.

Note: Nos. 323 to 325 Squadrons were not formed, but allocated Squadron Codes GN, PQ and EA respectively for the period April to September 1939.[3] However these numbers were used for post-war Royal Netherlands Air Force squadrons.

Note: No. 348 Squadron was not formed,[5] but Squadron codes letters FR were allocated for the period April to September 1939.[3]

Under Article XV of the British Commonwealth Air Training Plan, the air forces of Australia, Canada and New Zealand formed squadrons for service under RAF operational control. Most were new formations, however some had already existed prior to the creation of Article XV and had already been operational during the war, including combat operations.

Note: Although squadron numbers 444 to 449 were also reserved for the RCAF, it did not use them during the Second World War.

Note: Although squadron numbers 465 and 468 to 479 were also reserved for the RAAF during the Second World War, it did not use them.

Note: Although the squadron numbers 491 to 499 were reserved for RNZAF units during the Second World War, no such squadrons were formed.

Note: No No. 599 Squadron seems to have been formed.[6] There were to have been Reserve squadrons using numbers 551–566 which would have been created by adding 500 to existing Operational Training Unit designations.[7] In the event the plan was never put into effect, although there was some desultory use of some of the numbers by some of the OTUs for a short period. Despite their lack of formal activation, this block of numbers has never been re-allocated for use by other units.

In the event of a German Invasion the Operational Training Units would have been re-formed into the Squadrons below, under plans as part of Operation Saracen, formulated in Spring 1942, which were later revised as Operation Banquet. Some reserve Squadron numbers were used by their respective OTU's during operational tasks until at least May 1944.[3]

Note: No. 606 Squadron RAF was allocated Squadron codes BG for the period April to September 1939, but was not formed.[3] A non-flying No. 606 Helicopter Support Squadron of the RAuxAF was later formed in 1999.[8]

These squadrons were formed during the Second World War to perform artillery spotting and liaison roles, in co-operation with Army units. Most AOP squadron aircrew were provided by the Army. Nos. 661–664 and 666 Squadron were re-formed as Royal Auxiliary Air Force units in 1949. Nos. 651, 652 and 656 Squadron were transferred to the Army Air Corps in 1957.[10]

While still under the control of the RAF, flights of the Fleet Air Arm were organized into squadrons with numbers in the 700 and 800 range. The range 700 to 750 had been previously used for Fleet Air Arm Catapult Flight numbers.[11]

Training Depot Stations (TDS) were still in use after the formation of the RAF in 1918.[13]

The majority of Universities in the United Kingdom are, or have been, represented by University Air Squadrons where under-graduates can sample the Royal Air Force and learn to fly, as well as take advantage of scholarship schemes. They operate the Tutor T.1.

To allow rapid transport of Air Officers, staff and other important people many units and Headquarters operated communication Sections, Flights, Squadrons or wings.

Most units of the Royal Air Force are identified by alphabetical (or similar) characters, known as a "squadron code", that is painted on all aircraft belonging to that unit. When individual units are assigned unusually large numbers of aircraft, multiple squadron codes have been used.

Other air forces, especially those from other Commonwealth countries, have often used similar systems of identification. During the Second World War, when units from other air forces were attached to the RAF – such as the Article XV squadrons (also known as "400 series squadrons") – their squadron codes were often changed, to avoid confusion with RAF units.

Historically, the codes have usually been two letters of the alphabet, painted on the rear fuselage next to the RAF roundel. These formed a suffix or prefix to the call sign of each aircraft (on the other side of the roundel) which was usually a single letter (e. g. "G for George"). In general, when an aircraft is lost or withdrawn from use, its call sign has been applied to its replacement or another aircraft.