This is a complete list of cities in Ukraine. On 1 January 2010 there were 459 cities (Ukrainian: мiсто, misto) in Ukraine. There are three categories of cities which are indicated by a respective letter as a city status in the table below (see legends below for the city status lettering identification). All cities have some level of significance. Any settlement that obtains city status becomes a city of district (район, raion) subordinance. The cities of regional significance can either be of oblast subordinance or republican subordinance (in Crimea). The cities of national significance are officially known as the cities with special status.

Below is the list of all cities by population at the 2001 Ukrainian Census. 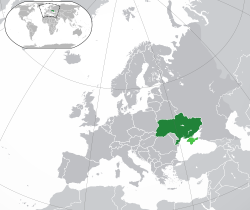 City status is provided in the following table