Country calling codes or country dial in codes are telephone dialing prefixes for the member countries of the International Telecommunication Union (ITU). They are defined by the ITU-T in standards E.123 and E.164. The prefixes enable international direct dialing (IDD), and are also referred to as international subscriber dialing (ISD) codes. 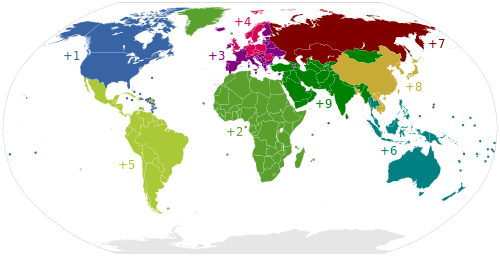 Country calling codes are prefix codes; hence, they can be organized as a tree. In each row of the table below, the country codes given in the left-most column share the same first digit; then subsequent columns give the second digit in ascending order.

While there is a general geographic grouping to the zones, some exceptions exist for political and historical reasons. Thus, the geographical indicators below are approximations only.

Zone 7: Parts of the former

Alphabetical listing by country or region

Locations with no country code

In Antarctica, dialing is dependent on the parent country of each base:

Other places with no calling codes: