This list of first-class cricket records itemises some record team and individual performances in first-class cricket. The list is necessarily selective, since it is in cricket's nature to generate copious records and statistics. Both instance records (such as highest team and individual scores, lowest team scores and record margins of victory) and season and career records (such as most runs or wickets in a season, and most runs or wickets in a career) are included.

It must be remembered that, officially, there was no "first-class cricket" in Great Britain before 1895 or in the rest of the world before 1947 (see First-class cricket for details of the official rulings). The performances noted in this article include several which occurred in earlier years but it is understood that all were achieved in major cricket matches that are retrospectively recognised by most historians or statisticians as first-class. Some matches have not been universally accepted as first-class for statistical purposes and there are thus variations in published statistics, mainly because of the different proposals that have been made for the starting date of the statistical records, ranging from the 17th century to 1895. For a more detailed explanation, see Variations in first-class cricket statistics.

Records shown here are quoted by either CricketArchive or Wisden Cricketers' Almanack, unless otherwise stated.

Greatest margins of victory by an innings

Greatest margins of victory by runs

Victory without losing a wicket

Highest totals in the fourth innings

The highest individual score in first-class cricket is 501* scored by Brian Lara for Warwickshire in 1994. There have been nine other scores of 400 or more, including another by Lara and two by Bill Ponsford.

The earliest century definitely recorded in a match generally regarded as first-class is the 136 scored by John Small in the 1775 season (see below). There can be little doubt that centuries had been scored before this but the records are either lost or the known details are incomplete. Some of the main instances of high scoring prior to 1772 are as follows:

The following individual scores in first-class matches from 1772 are progressively the highest definitely recorded on contemporary scorecards:

Ward's record survived for 56 years until W. G. Grace scored the first triple-century in first-class cricket in 1876. The table below shows the progressive world record from 1876. 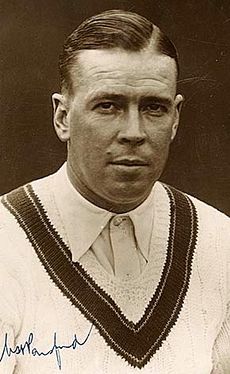 The world record individual score in all forms of cricket is 1,009* by Pranav Dhanawade in January 2016 for K. C. Gandhi High School in a Mumbai schools match.

Most runs in a career 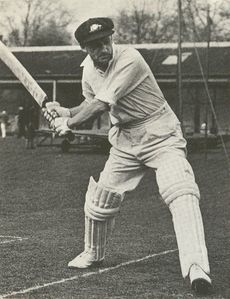 Don Bradman: his first class average of 95.14 is, like his Test average of 99.94, much higher than any other batsman's

Qualification: 20,000 runs, average 54. Entries in bold are for current players who are still playing first-class cricket.

The highest first-class batting career average of all is 207.00, by Norman Callaway, who aged 18 scored 207 in his only first-class innings on his début for New South Wales against Queensland in 1914–15. He died during the Second Battle of Bullecourt in 1917.[61]

Most runs in a season

Most runs in an over

The lowest completed first-class innings to include a fifty is Indians' 66 against Yorkshire at Harrogate in 1932, to which Nazir Ali contributed 52 (78.79%) and his partners 9 (there were 5 extras).[73]

The lowest completed first-class innings to include a double-century is Namibia's 282 against Kenya at Sharjah in January 2008, to which Gerrie Snyman contributed 230 (81.56%) and his partners 43 (there were 9 extras).[76]

The highest percentage of runs scored in any completed innings is 83.43% by Glenn Turner who scored 141* out of Worcestershire's 169 against Glamorgan at Swansea in 1977. The remaining batsmen scored 27 and there was one extra.[79]

Most boundaries in an innings

Qualification: 3. Includes all scores of 300 or more. Entries in bold are for batsmen still playing first-class cricket.

Qualification: 15. Includes all scores of 200 or more.

Main article: List of batsmen who have scored 100 centuries in first-class cricket

Many cricketers with short first class careers fail to ever score a run, and finish with a batting average of 0.00. Seymour Clark (a wicket-keeper for Somerset in the 1930 season) is believed to hold the record for most innings in a scoreless career[96] with nine innings in his five matches, including seven ducks.[97] The record for most matches in a career without ever scoring is believed to belong to John Howarth[96] (a Nottinghamshire fast-medium bowler in the 1960s), whose thirteen matches included seven innings and four ducks.[98]

The most consecutive single-figure innings by a batsman is 71, which has occurred twice. The first occurrence was by Jem Shaw who played chiefly for Nottinghamshire and the All England Eleven between his first-class debut on 26 June 1865 against Surrey with a score of 9,[100] which he did not surpass until scoring 15 in the second innings of his last match of 1870 for “Richard Daft’s XI” against the United North of England Eleven.[101] This was equalled by Eric Hollies of Warwickshire and England between 20 July 1948, when he made 12 not out against Glamorgan, and 16 August 1950, when he made 14 against Nottinghamshire.[102] Hollies also holds the record for most consecutive innings without reaching 20, playing a total of 284 innings between 23 August 1939 when he made 22 against Gloucestershire and 19 May 1954, when he almost doubled his previous highest first-class score in making 47 against Sussex.[103] Billy Bestwick[104] of Derbyshire did not reach 20 in his last 258 first-class innings after making 20 against Warwickshire on 9 August 1906.

The lowest career batting average by a player with more than fifty first-class matches is almost certainly 2.63 by Francis McHugh of Yorkshire (three matches) and Gloucestershire (92 matches) between 1949 and 1956.[105] McHugh batted in 111 innings for only 179 runs, with only four double figure scores. No other regular first-class cricketer is known to have had a batting average of under 3.00.

Most wickets in a career

Most wickets in a season

Best figures in an innings

File:John Wisden.jpg
John Wisden, who in one innings clean bowled all ten South of England batsmen in 1850

The most wickets possible in an eleven-a-side match is ten, and this has been achieved on a number of occasions. The first to do so was Edmund Hinkly in 1848 for Kent v England at Lord's.[108] Perhaps the most famous early instance was two years later, when John Wisden, playing for the North of England v South of England at Lord's in 1850, clean bowled all ten South batsmen.[109] In these early matches, the number of runs scored off each bowler was not recorded. The only other all-ten analysis not to contain any direct assistance from a fielder was by Eric Hollies, who got seven Nottinghamshire batsman out clean bowled and three leg before wicket in his ten for 49 for Warwickshire v Nottinghamshire at Edgbaston, Birmingham in 1946.[110]

The cheapest all-ten (and therefore the best innings bowling analysis in first-class cricket) was achieved by Hedley Verity in 1932 at Headingley, when he took ten for 10 for Yorkshire against Nottinghamshire.[111] The most expensive all-ten recorded was ten for 175 by Eddie Hemmings playing for a touring International XI against a West Indies XI at Sabina Park, Kingston, Jamaica in 1982.[112] 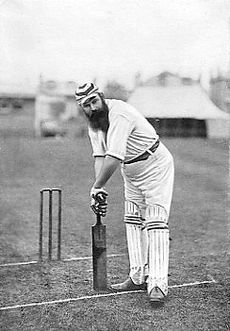 Best figures in a match

The most wickets ever taken in a first-class match is nineteen, by Jim Laker for England against Australia at Old Trafford, Manchester in 1956, in the fourth Test match of that year's Ashes series. His figures were nine for 37 in Australia's first innings, and ten for 53 in their second.[113]

Laker's feat has never been paralleled in first-class cricket. Eighteen wickets in a match was achieved by William Lillywhite for eleven Players against sixteen Gentlemen at Lord's in 1837, and by Henry Arkwright for MCC against Kent in a 12-a-side match at Canterbury in 1861, but seventeen is the most otherwise recorded in an eleven-a-side match. Apart from Laker's, there has only been one instance of seventeen wickets in a match since World War II, by John Davison for Canada against United States of America in an ICC Intercontinental Cup match in 2004.[114]

Five wickets in an innings

Individual bowlers take great credit if they can capture five or more wickets in an innings. The earliest known instance of this was by William Bullen, who bowled five batsmen out when playing for All-England v Hampshire at Sevenoaks Vine in 1774. Scorecards were still uncommon at the time and bowling analyses were incomplete; bowlers were only credited with "bowled" victims, catches being awarded to the fielder only.

File:Wilfred Rhodes.jpg
Wilfred Rhodes, an outstanding all rounder: he took more wickets than anyone else, and also regularly opened the batting for England

Ten wickets in a match

It is a notable achievement for a bowler to capture 10 wickets in a match, and the feat is usually highlighted in career statistics. The earliest known instance was by Thomas Brett of Hampshire against Surrey at Laleham Burway in 1775. Brett's victims were "all bowled" as he was not credited with wickets falling to catches. He took seven in the first innings and four in the second (but Surrey still won by 69 runs).

A hat-trick is when a bowler takes three wickets in three consecutive deliveries. Doug Wright achieved the most hat-tricks in first-class cricket with 7, and Tom Goddard and Charlie Parker each took 6.[115]

In 1907, Albert Trott of Middlesex took four wickets in four balls, and another hat-trick, in the same Somerset innings.[116] In 1963–64, Joginder Rao playing for Services took two hat-tricks in the same Northern Punjab innings during his second first-class match, after having also taken a hat-trick in his début match.[117] Other instances of two hat-tricks in a match have been achieved by Alfred Shaw (in 1884), Jimmy Matthews (1912 in a Test match), Charlie Parker (1924), Roly Jenkins (1949), and Amin Lakhani (1978–79).[118]

Four wickets in four balls is a rarer achievement, first done by Joseph Wells (father of science fiction author H. G. Wells) for Kent against Sussex in 1862.[119] Alan Walker, for Nottinghamshire in 1956, uniquely took the last wicket of Leicestershire's first innings, and a hat-trick with the first three balls of their second innings.[120] Bob Crisp is the only player to take four wickets in four balls on two occasions.[119]

Five wickets in five balls has never been achieved. Five wickets in six balls has been achieved five times,[80] by Bill Copson for Derbyshire against Warwickshire in 1937,[121] by William Henderson for North East Transvaal against Orange Free State at Bloemfontein in 1937–38,[122] by Pat Pocock for Surrey against Sussex at Eastbourne in 1972,[123] by Yasir Arafat for Rawalpindi against Faisalabad at Rawalpindi in 2004–05,[124] and by Neil Wagner for Otago against Wellington in 2010–11. Wagner took five wickets in the over, a world's first.[125] Pocock's spell also included six wickets in nine balls and seven wickets in eleven balls, both records.

An all-rounder excels at more than one discipline, usually both batting and bowling. Wicket-keeping all-rounders are effective batsmen and effective wicket-keepers.

Most dismissals (catches plus stumpings) in a career

Most stumpings in a career

Most catches in a career

Linked scorecards are from the Cricket Archive.