This is a List of military engagements of World War I which encompasses land, naval, and air engagements as well as campaigns, operations, defensive lines and sieges. Campaigns generally refer to broader strategic operations conducted over a large bit of territory and over a long period of time. Battles generally refer to short periods of intense combat localised to a specific area and over a specific period of time. However, use of the terms in naming such events is not consistent. For example, the First Battle of the Atlantic was more or less an entire theatre of war, and the so-called battle lasted for the duration of the entire war.[1] 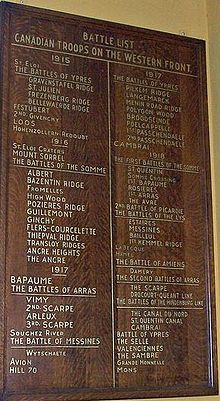 List of Canadian battles during the First World War on the Western Front plaque in Currie Hall, Royal Military College of Canada

The Western Front comprised the frictinous borders between France, Germany, and the neighboring countries. It was infamous for the nature of the fight that developed there; after almost a full year of inconclusive fighting, the front had become a giant trench line stretching from one end of Europe to the other.[1] 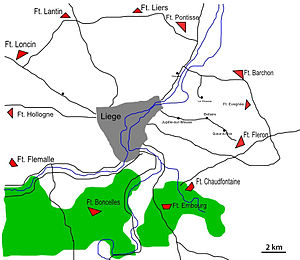 A diagram of the fortifications surrounding the city

The Battle of Liège was the first battle of the war, and could be considered a moral victory for the allies, as the heavily outnumbered Belgians held out against the German Army for 12 days. From 5–16 August 1914, the Belgians successfully resisted the numerically superior Germans, and inflicted surprisingly heavy losses on their aggressors. The German Second Army, comprising 320,000 men, crossed into neutral Belgium in keeping to the Schlieffen Plan, with the ultimate goal of attacking France from the north. Liège was key strategically as it held a position at the head of a pass through the Ardennes, which made it the best possible route into the heart of Belgium itself.[2]

The city was surrounded by a ring of 12 heavily armed forts, garrisoned by 70,000 men under the command of Gérard Leman. A night attack on 5 August was repulsed with heavy losses to the Germans, to the extreme surprise of the supremely confident German army.[citation needed] The next day, rather than confront the forts in battle, the German commander Erich Ludendorff attacked the city through the back, through a break in the line of fortresses that the Belgians had intended to fortify, but never did so. Although they succeeded in capturing the city, the Germans knew that they could not continue advancing troops into Belgium without first breaking down the forts. Aided by 17-inch Howitzers, the Germans finally succeeded in bringing down the forts on 16 August.[2]

The unprecedented Belgian resistance seriously prolonged the opening German assault at the outbreak of World War I, allowing France and Britain time to organize themselves and a defense of Paris. In addition, it was an important moral victory for the Allies.

Battle of the Frontiers

The early French initiative, to recapture territory lost to the Germans in the 1870–1871 Franco-Prussian War, was played out in a series of frontier battles between the Germans and the French, known collectively as the Battle of the Frontiers. The battles at Mulhouse, Lorraine, the Ardennes, Charleroi, and Mons were launched more or less simultaneously, and marked the collision of the German and French war plans, the Schlieffen Plan and Plan XVII, respectively.[1][3]

The Battle of Mulhouse was the opening attack by the French against the Germans. The battle was part of a French attempt to recover the province of Alsace, which had been lost as a consequence of having lost the Franco-Prussian War of 1870–1871. A French force under General Louis Bonneau detached from the French First Corps and invaded the frontier on August 8, 1914. Opposing them was the German 7th Division. The recapture of the area, preordained by the French Plan XVII, was to boost national pride—and to provide a guard force for the flank of subsequent invasions.[4]

The French quickly recaptured the border town of Altkirch with a bayonet charge. Bonneau, suspicious of the little German resistance, was wary of a carefully planned German trap. However, under orders the next day he advanced to Mulhouse, capturing it with little effort, for the Germans had already abandoned it.[4]

In France, the retaking of Mulhouse, without a fight, was celebrated greatly. However, with the arrival of German reserves from Strasbourg, the tides were turned, and the Germans mounted a counter-attack on nearby Cernay. Unable to mount an all-encompassing defense, and unable to call on reserves of his own, Bonneau began a slow withdrawal from the region. Support troops hastily sent by the French commander-in-chief Joseph Joffre arrived too late to prevent Bonneau from retiring. Joffre was immensely angry with Bonneau, charging him with a "lack of aggression" and immediately relieving him of command. Realizing the psychological magnitude of the loss, he assembled a force, led by Paul Pau, which tried unsuccessfully to recapture the province.[4] 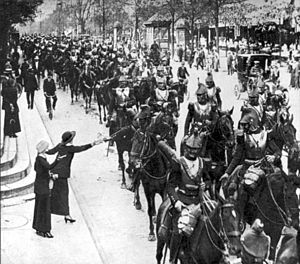 French heavy cavalry on the way to battle, Paris, August 1914.

The invasion and recapture of Lorraine formed one of the major parts of the French pre-war strategy, Plan XVII. The loss of Lorraine (and Alsace; see above) to the Prussians in the 1870-1871 Franco-Prussian War was seen as a national humiliation by the public and military alike, and was at the forefront of their minds for the next war against the Germans.[5]

The battle was initiated by the French First and Second armies. The First, led by General Auguste Dubail, intended to take Sarrebourg, whilst the Second, led by General Noel de Castelnau, intended to take Morhange. Both towns were well fortified, and the task of defending them fell to Crown Prince Rupprecht, who had overall control of the German Sixth and Seventh armies.[5]

Rupprecht adopted a strategy in which he would fall back under the French attacks, then counter-attack once he lured the French all the way to his fortifications. As the French army advanced, it met stern resistance in the form of German artillery and machine-gun fire. Army Chief of Staff Helmuth von Moltke authorized a more aggressive tactic soon after, and on August 20, the German army started to roll back the French. Caught by surprise and without the assistance of entrenched positions, the Second Army was pushed back quickly, eventually into France itself. A gap was exposed between the forces in Mulhouse and those in Lorraine; the forces in Mulhouse were withdrawn to keep the gap from being taken advantage of by the Germans.[5]

Diverging from the Schlieffen Plan, Rupprecht received reinforcements and attacked the French line near the Trouée de Charmes; however, through the use of reconnaissance aircraft, the French spotted the German buildup, and were able to build an adequate defence. Thus the German gains were minimized, and were eradicated by a following French counter-assault on the 25th. Fighting continued there until the end of August, and quickly ground into a stalemate and trench warfare.[5]

The Battle of Ardennes, fought between 21 and 23 August 1914, was another of the early frontier battles, conducted during the first month of the war. The battle was sparked by the mutual collision of French and German invasion forces in the lower Ardennes Forest.[6]

The pre-war French strategy expected German forces in the area to be light, and the French light, rapid firing artillery was expected to convey an advantage in forested terrain over the bigger German guns. Instead, it became increasingly apparent to all of the commanders in the region that a significant enemy presence was gathering, for the Germans had planned an offensive through the area.[6]

The German troops started moving through the forest on 19 August. Conditions worsened, and by the time the two armies met, the forest was covered in a deep fog, resulting in the two forces stumbling into one another. At first, the French took the Germans as a light screening force; however, in reality the French were heavily outnumbered. The first day of the battle consisted of light skirmishes; the main battle did not begin until 21 August.[6]

According to the pre-war French strategy document, Plan XVII, German forces in the area were only expected to be light, with French light, rapid-firing artillery proving advantageous in a wooded terrain such as that found in the Ardennes. However, what emerged was totally opposite; the French eagerly charged at German positions in the woods, and were mowed down by machine-gun fire. The French armies retreated hurriedly in the face of superior German tactical positioning, and the Germans chased them all the way back into the French border. In addition to losing a key strategic position, the French forfeited iron resources in the region as well.[6]

The Battle of Charleroi, another of the frontier battles, was an action taking place 12–23 August 1914. The battle was joined by the French Fifth Army, advancing north towards the River Sambre, and the German Second and Third armies, moving southwest through Belgium. The Fifth army was meant to join the Third and Fourth armies in their attack through the Ardennes. However, this plan was put into effect assuming the Germans were not considering an assault further north, through Belgium—which was the German plan all along. Charles Lanrezac, commander of the Fifth Army, was strongly against the idea, fearing an attack from the north. However Joseph Joffre, chief-of-staff, rejected any such idea; after much persuassion, Lanrezac finally convinced him to move the Fifth Army northwards.

However, by the time the Fifth Army arrived, units of the German Second Army were already in the area. Joffre authorized an attack across the Sambre, predicting that the German force had 18 divisions, comparable to Lanrezac's 15, plus another 3 British reinforcements (the British Expeditionary Force). However, Lanrezac predicted much higher numbers, closer to the actual number—32 German divisions. He preferred to wait for reinforcements, however that same day the Germans attacked across the river and established two beachheads, neither of which fell despite several French counterattacks.

The next day, the main attack began; the fighting carried on through the day, and into the next. The French centre suffered severe losses and retreated; but the west and east flanks both held their ground. However, the retreat of cavalry divisions to the far west exposed the French west flank. With news of his situation, and the fact that his flanks could give and be completely enwrapped, Lanrezac ordered a general retreat into northern France.

The French town of Maubeuge was a major fort on the French side of the border. With a junction of no fewer than five major railway lines, it was recognized as a key strategic position by both sides; hence the construction of 15 forts and gun batteries ringing it, a total of 435 guns, and a permanent garrison of 35,000 troops. These were further bolstered by the choosing of the town as the advance base of the British Expeditionary Force. However, when these and the French Fifth Army retreated following the events at Charleroi, the town was cut off from allied support, and subsequently besieged on August 25. The German heavy artillery succeeded in demolishing the key forts around the city, and General Joseph Anthelme Fournier, in command of the garrison in the city, surrendered to the Germans some 13 days later.[7] 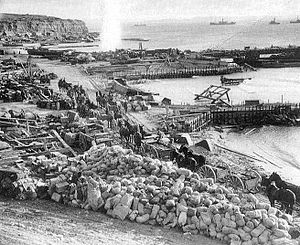 W Beach, Helles, on January 7, 1916, just prior to the final evacuation of British forces during the Gallipoli Campaign.

The Gallipoli Campaign (also called the "Dardanelles Campaign"), was a number of battles fought between 1915 and 1916.

World War I was the first war to see major use of planes for offensive, defensive and reconnaissance operations, and both the Entente Powers and the Central Powers used planes extensively. Almost as soon as they were invented, planes were drafted for military service.

Some historians consider some of these wars as being part of World War I, as they are considered to have a direct connection to the start of the war, or having been caused by the aftermath.