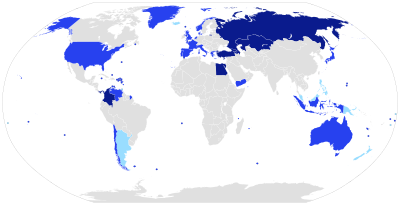 This is a list of countries spanning more than one continent, known as transcontinental states (or more properly[dubious – discuss] as intercontinental states). While there are many countries with non-contiguous overseas territories fitting this definition, only a limited number of countries have territory spanning an overland continental boundary, most commonly the line that separates Europe and Asia.

The boundary between Europe and Asia is purely conventional, and several conventions have remained in use well into the 20th century, but the now-prevalent convention, used for the purposes of this page, follows the Caucasus northern chain, the Ural River and the Urals. It has been in use by some cartographers since about 1850.[1] This convention results in a couple of Transcaucasian countries finding themselves almost entirely in "Asia", with a few small enclaves or districts technically in "Europe". These small mountainous nation states show no obvious signs of occupying two continents each. Notwithstanding these anomalies, this list of transcontinental or intercontinental states respects the convention that Europe and Asia are full continents rather than subcontinents or component landmasses of the larger Eurasian continent.

Colombia and Panama are generally considered to be entirely within South America and North America, respectively. 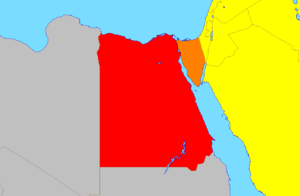 The land border between Asia and Africa is considered to go along the Isthmus of Suez and the Suez Canal in Egypt. The border continues through the Gulf of Suez, Red Sea and Gulf of Aden.

Two of 27 governorates of Egypt lie entirely on the Asian Sinai Peninsula and two are transcontinental: Ismailia Governorate is nearly equally divided by the Suez Canal, and Suez Governorate, which is coterminous with the transcontinental city of Suez, has a small portion east of the Canal.

For more details about the geographical border between Europe and Asia, see Boundaries between continents#Europe and Asia.
See also: Geographic criteria for EU membership and Transcontinental states with territory in Europe 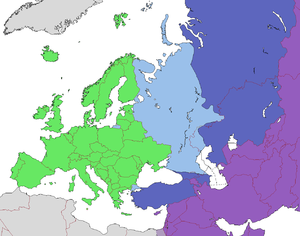 The modern conventional definition of Europe (e.g. National Geographic Society, CIA World Fact Book) has the Europe-Asia boundary follow the watershed of the Ural Mountains to the source of the Ural River, then follows that river to the Caspian Sea. The border then follows the Greater Caucasus watershed from the Caspian Sea to the Black Sea. According to this mainstream but not universally accepted definition (some geographers consider Europe and Asia a single continent, Eurasia),[2] there are five states with territory across the continental boundary:

A convention sometimes used in Russian geography draws the continental boundary along the Manych River to the Caspian, excluding Georgia and Azerbaijan from transcontinental status. A historical convention used in the 19th century followed the lower Volga instead of the Ural river, which would also exclude Kazakhstan from being transcontinental.

[3] The northeastern Azerbaijan district borders run mostly along the main Caucasus watershed. Five districts are entirely within Europe, and the transcontinental Khizi district is almost equally divided on the two sides of the watershed. The remaining 53 districts are within Asia. Nevertheless, Azerbaijan is a member of the Council of Europe. 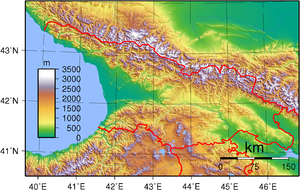 The Terek and Sulak rivers both originate in Georgia and both empty into the Caspian Sea in Dagestan; their upper basins in Georgia are north of the Greater Caucasus watershed (the modern-day Europe-Asia divide), including northern parts of the Tusheti and Khevsureti historical regions and Kazbegi District. A total of 2,650 square kilometers, or 4% of Georgia's territory, is north of the Caucasus Mountains and thus in Europe. The remaining 96% of the country is in Asia.

Russian regions' borders follow the continental divide (Ural Mountains and Ural River) more often than not. There is also the relatively small 2600 square kilometer Sochi area of Russia in Asia, bordering Georgia and located south of the main Caucasus watershed. Orenburg on the Ural River is a transcontinental city. More detail on the political divisions through which the intercontinental boundary runs can be found here. Russia is a member of the Council of Europe.

See Borders of the continents for more details about the geographical border between the two Americas.

For more details about the geographical border between Europe and Asia, see Borders of the continents.

See Borders of the continents for more details about the geographical border between Africa and Europe.

These examples have integral parts associated with other continents. Norway, South Africa, and the United Kingdom may also be considered transcontinental by virtue of their distant island possessions or territories associated with a continent other than where the country is based.[clarification needed]

A number of nations claim ownership over portions of the continent of Antarctica. Some, including Argentina and Chile, consider the Antarctic land they claim to be integral parts of their national territory. Some nations also have sub-Antarctic island possessions north of 60°S latitude and thus recognized by international law under the Antarctic Treaty System, which holds in abeyance land claims south of 60°S latitude.